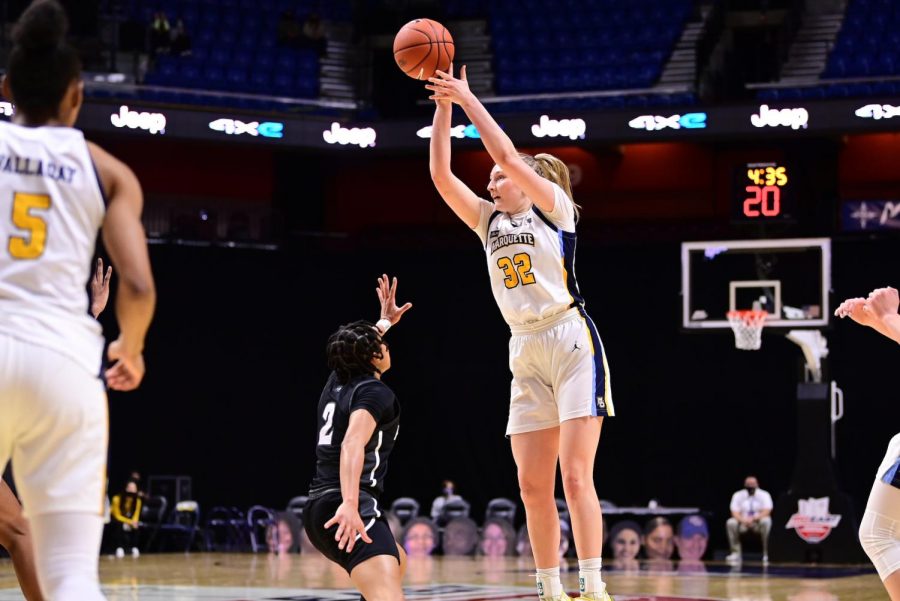 The Marquette women’s basketball team defeated No. 7 Providence 68-43 in the BIG EAST quarterfinals behind a strong offensive surge from redshirt senior forward Lauren Van Kleunen. The Golden Eagles advance to the semifinals which will take place tomorrow against either Seton Hall or Creighton.

“It’s great to open up with a win,” head coach Megan Duffy said. “I felt like we were waiting around for a long time to finally get to play. Just really proud of the overall effort tonight against Providence. We knew we had to be good defensively. I thought our toughness at times was pretty exciting to see, held them to 30% shooting. One of our goals today was to kind of wear them out after a tough game that they had yesterday, and I thought we did overall a really nice job kind of controlling the pace and being in control most of the game.”

Marquette opened the door early and never looked back.

MU got out to a 9-0 lead and the Friars committed five turnovers in the first five minutes of the game. The Golden Eagles led 15-6 going into the second frame.

“I think we have talked all year long that our team success isn’t predicated on how many threes we make,” Duffy said. “But it’s always nice when the ball’s moving to hit open shots. I thought that’s what we did a few more times tonight. It was nice to see Claire Kaifes knock down a couple of 3s and see that ball go in the hoop.”

Providence forward Sophia Widmeyer started the second quarter strong, but Marquette responded with six straight points to earn a double-digit lead. Widmeyer was able to keep her team in contention, but Marquette was able to go into halftime with a 33-15 advantage.

“(Defense0 was a big challenge against UConn,” Duffy said. “We got whipped pretty good across the board last week, so we really challenged the core … led by Lauren and Chloe and Cam, just to have a different mentality of themselves.”

Coming out of halftime, junior Alyssa Geary hit a jumper for Providence, while Marquette went on a scoring drought. However, Camryn Taylor put a couple points up on the board after a pair of free throws. Marquette went into the final ten minutes with a 48-28 lead.

Van Kleunen led the way for the Golden Eagles with 17 points, followed by Karlen with nine. Senior guard Selena Lott led the team in rebounds with nine.

“It’s big that we were able to move the ball, have ball movement, to get those open shots,” Van Kleunen said. “And I think a big thing is that extra pass to get an even better shot. And we know, as kind of what I just talked about, with the post group rebounding, they get it on the glass we’re going to go get it. That’s just a big thing we identify with our team.”

Marquette will now play tomorrow night to compete for a spot in the BIG EAST Championship game at 5 p.m. Central Standard Time.

This article was written by Molly Gretzlock. She can be reached at molly.gretzlock@marquette.edu or on Twitter @MollyGretzlock.