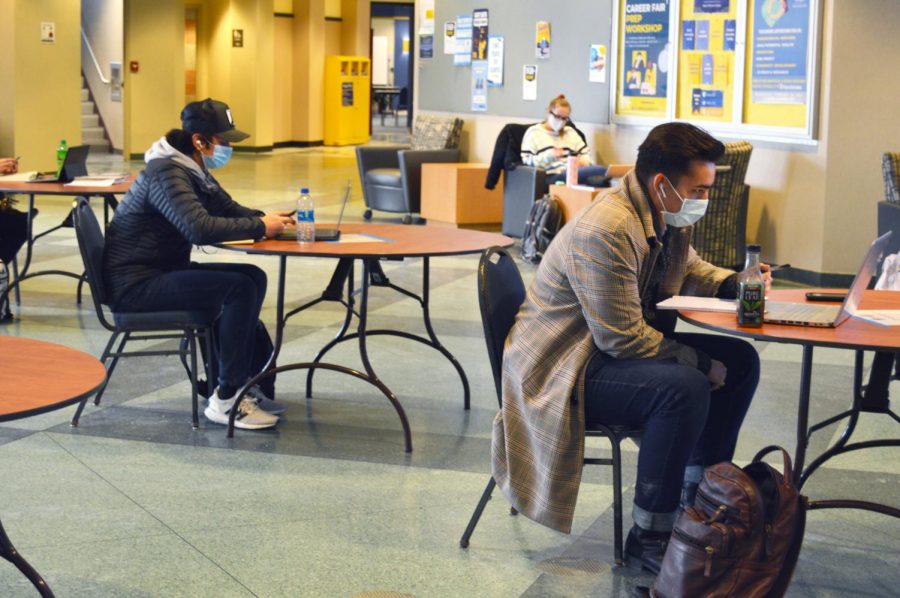 As Marquette students are enduring the third straight semester altered by the whims of COVID-19, much has changed. Classrooms are spaced out, dining halls have moved to primarily take out and some residence halls have closed sporadically in response to outbreaks on campus.

Marquette is far from alone in these changes. For just over a year now, universities around the world have found themselves having to make unprecedented decisions regarding classes, student housing and more.

For Marquette, the transition from in-person classes to online learning began following spring break 2020. On March 23, 2020, the university announced classes would continue remotely for the remainder of the semester.

During this time, Victoria Davenport, a graduate student at Alcalá University in Madrid, Spain, was in the hospital with COVID-19 — a virus that Davenport, like many people at the time, thought would never touch her.

“I ended up getting sick a few days after our lockdown started, and I was by myself and that’s when I was like ‘okay this is real.’” Davenport says. “I had to get antibiotics at the hospital because my asthma was acting up. So after recovering from that, my feelings towards COVID-19 and other things started to change.”

As cases in Spain started to spike in March 2020, Davenport says the Spanish government decided to initiate a partial lockdown March 14. This was a centralized federal decision that contrasted how individual states in the U.S. handled lockdown in the same month. Moreover, by the end of March, the United States had 199,353 cases to Spain’s 165,084.

Davenport says that her education for the remainder of the spring 2020 semester was completed online. As the pandemic continued into the fall 2020 semester, Davenport’s university elected to stay fully online.

5,416 miles away in Monterrey, Mexico, Heidi Peralta, a junior at Technológico de Monterrey, similarly recounts the moments when she first realized that COVID-19 would have a significant impact on her life.

“My universidad said that we would not have classes and I found that very strange,” Peralta says. “Then they said that we should be closing for two weeks and I became very scared because I didn’t know how bad COVID-19 would be.”

As a biotechnology engineering major, Peralta says that being online posed specific problems for her normally in-person labs that coincide with her studies. Peralta says these labs usually include experiments involving machines that students use to collect data.

Peralta says it is harder to do these kinds of experiments in an online setting, and at times the university was not adequately prepared.

“Sometimes the teachers did not have the tools or all the information about how to do the experiments online and that made it more difficult for me,” Peralta says.

By the end of November 2020, Mexico was working to handle its then 1.1 million cases. At the same time, the U.S. was facing 14 million cases.

Peralta says her 2021 spring semester was also announced to be fully online. Aalto University in Espoo, Finland, made the same decision.

“The transition phase was hard because lectures had never been recorded before, but I feel they are doing a good job of doing classes online given the current situation,” Felton says.

In other countries across Europe, opening up schools has been more common, for example, Germany, England, France, and Italy—all countries in the top 10 for total COVID-19 cases.

Felton says that because of COVID-19, he feels the social aspects of being in college have been less fulfilling as bars, restaurants and classrooms are all closed. However, he says that the restrictions are worth it to keep everyone safe.

Felton says the culture around COVID-19 in Finland is very serious among students, particularly since the country implemented stricter rules in March in order to combat the new U.K. COVID-19 variant.

At the time of writing, Finland has battled 60,200 cases total as opposed to the U.S. which has faced 29.5 million, including 535,325 deaths related to COVID-19. To give an idea of how the unique populations of these countries are being affected, the number of cases above represent what would be 8% of the U.S. population versus what would only be 1% of the Finnish population.

When asked about when classes would fully return in-person, Felton says that there is no current timetable but that his university said they aim to return “after 60% of students and faculty had been vaccinated for COVID-19.”

Peralta echoes this, saying that, as it currently stands, universities would not return in person until a certain amount of students have been vaccinated. She says with the order and availability of vaccines in Mexico there seems to be little hope for an in-person 2021 fall semester at the moment.

On March 1, Marquette University President Michael Lovell announced that the university intends to conduct a fully in-person fall 2021 semester. The email sent out had no stipulations concerning the percentage of students or faculty being vaccinated.

This story was written by Beck Salgado. He can be reached at beck.salgado@marquette.edu.