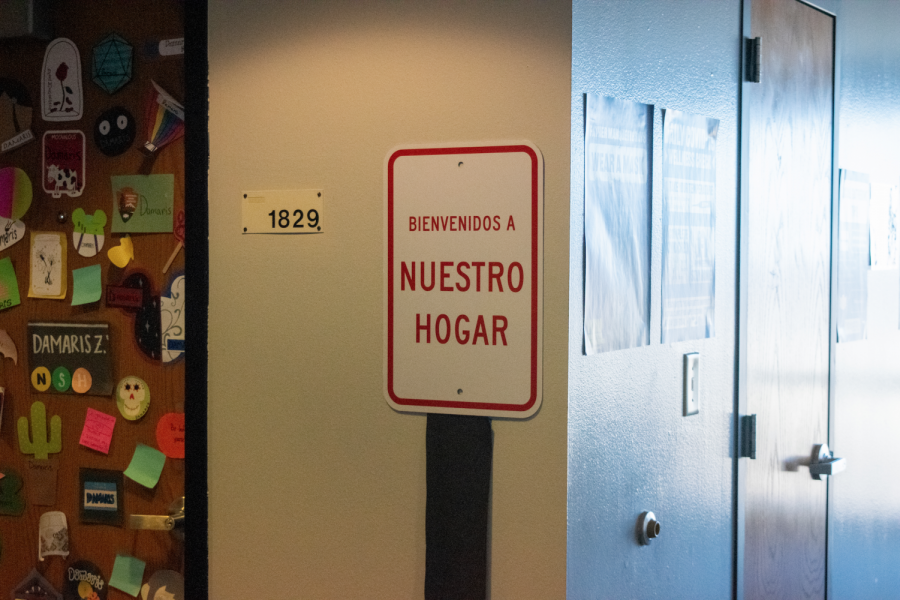 Nuestro Hagar is a Spanish-speaking living learning community in Straz Tower that celebrates and builds a community around Latinx culture.

When looking back at their time at Marquette University, twin sisters Siham and Nawal Samara have always felt students and faculty have taken an interest in learning about their Honduran heritage.

“I’ve never really met anyone from here that’s like ‘oh you’re from a different place’ or ‘oh you have different thoughts or beliefs than me, I don’t want to be friends with you,'” Siham states. “Everyone has always been really interested in getting to know more about where we come from or where the hell it’s located. It’s really nice, people are really nice – I like it.”

Siham and her sister Nawal – seniors in the Colleges of Engineering and Communication, respectively – are currently completing their final semester at Marquette. Both chose to study in the United States because their older brother studied in Tampa, Florida and they have been visiting the States since they were children.

Caroline Oas, adjunct assistant professor and coordinator of the English as a Second Language Program (ESLP) at Marquette University, understands that in her career she is not only teaching international students, but is also always learning from them.

“The value that our international students bring to campus, both in-person and virtually, is immeasurable,” Oas states in an email, explaining the importance of intercultural competence in a globalized world.

The Office of International Education (OIE) is often the first contact international students have with the school, and it is a resource that stays with them throughout their education at Marquette.

Aditii Wakhlu, a sophomore in the College of Health Sciences from India, was the first of her family to study in the United States. Wakhlu chose Marquette for its neuroscience program, as well as scholarship awards she received. She says that international students have a lot of additional paperwork they need to complete to study in another country and navigating this process can be daunting, which is why programs such as OIE are so impactful.

“They are awesome … they have always been super helpful with things like applying for social security and any questions you can have,” Wakhlu says. “We love OIE.”

Jovanni Herrera, a sophomore in the College of Engineering from Honduras, transferred to Marquette this fall. Herrera chose Marquette because of its engineering program, its Catholic roots and because his friend’s brother had attended the university. When comparing Marquette and the community college in Lake County, Illinois he previously attended, Herrera says one major difference was the community he was embraced by at Marquette.

“ … OIE does that. They try to meet people from the same country. They try to get them to meet each other so they can share experiences,” Herrera states. “If they didn’t already know each other from back home, now they do.”

Herrera attended a gathering hosted by OIE that led him to meet more and more people and find his community at Marquette. Susan Whipple, Assistant Director of the Office of International Education, says that OIE hosts ‘Welcome Back’ events on the first Friday of each term. These events serve as an opportunity of returning and new students to connect. The event was virtual in Fall 2020 and Spring 2021.

Outside of the Office of International Education, other programs on campus exist to cultivate a welcoming environment, not only for international students, but also for students whose first language is not English. An example of one of these programs is Nuestro Hogar, a living learning community for Latinx students located in Straz Tower. Latinx students that are a part of this community participate in different activities together such as cooking meals, attending weekly community nights, organizing and attending cultural events on campus, and finding a home through the floor community.

Edwin Arrollo, a sophomore in the College of Engineering from Illinois, has been a part of Nuestro Hogar for two years. Arrollo says his experiences as part of the LLC have affected his time at Marquette for the better, particularly before the pandemic. Despite his happy memories, he expresses having a twinge of guilt from his experience.

“I really enjoy the floor. I feel like something that needs to get going is other people getting a learning community, like other minorities,” Arrollo says. “I definitely do feel a little unfair that we get one and they don’t because I know a lot of them would really appreciate that and they would feel more at home and more comfortable in a learning environment like that … ”

Arrollo says he feels a lot of ethnic minority communities on campus that don’t have access to learning communities like Nuestro Hogar constantly have to go out of their way to find a space where they can gather and work together.

Wakhlu, who is actively involved in research on campus and hoping to attend medical school, has worries about how smoothly her application process will go.

“That’s a general theme, of just taking into consideration the needs of international students and how they can be different from people who have citizenship,” Wakhlu says. “Even with things like advising, I’ve noticed a lot of people aren’t aware of the limits of your visa status … I wish there were more people in departments who were aware of that extra thing that we might need sometimes. … I feel like that’s not something everyone knows and it’s a little hard when people are supposed to be advising you and they don’t know.”

Wakhlu says that OIE is helpful with issues surrounding visas, for example, but the office is unable to help students with other questions like applying for graduate school and medical school. She says this is where advisors often fall short for international students.

Michelle Gomez, a sophomore in the College of Communication from Guatemala, says students and faculty need to take an interest in steps the school is taking to promote diversity and inclusion on campus.

“It is just hard to get used to a community when there are so many things going on regarding social issues and justice. Overall, Marquette is great, they just need to get more out there and actually come up with programs that people are going to show some interest in,” Gomez states. “(Marquette says) a lot of things about how diverse campus is but we don’t see it. We don’t see any change.”

Gomez originally planned to attend medical school in Guatemala, but decided she wanted to apply to schools in the United States. With the help of scholarship, Marquette financially stood out to Gomez.

In light of recent events regarding diversity and inclusion on campus, it is clear Marquette has work to do. According to Marquette University’s Composition Dashboard from Fall 2020, there are 5,506 white students, 2,291 people of color, and 157 international students making up the undergraduate student body. In all categories that make up the dashboard, this trend can be seen. Currently, Herrera, however, finds hope in the student body’s reaction to recent events.

“I like that people unite in support… of certain people that are being mistreated…” Herrera states. He says he feels it it important that students are aware of issues on campus and work to raise awareness.

Michelle Gomez previously was an employee with the Marquette Wire. She had no role in the reporting or editing of this story.

This story was written by Maria Crenshaw. She can be reached at maria.crenshaw@marquette.edu.