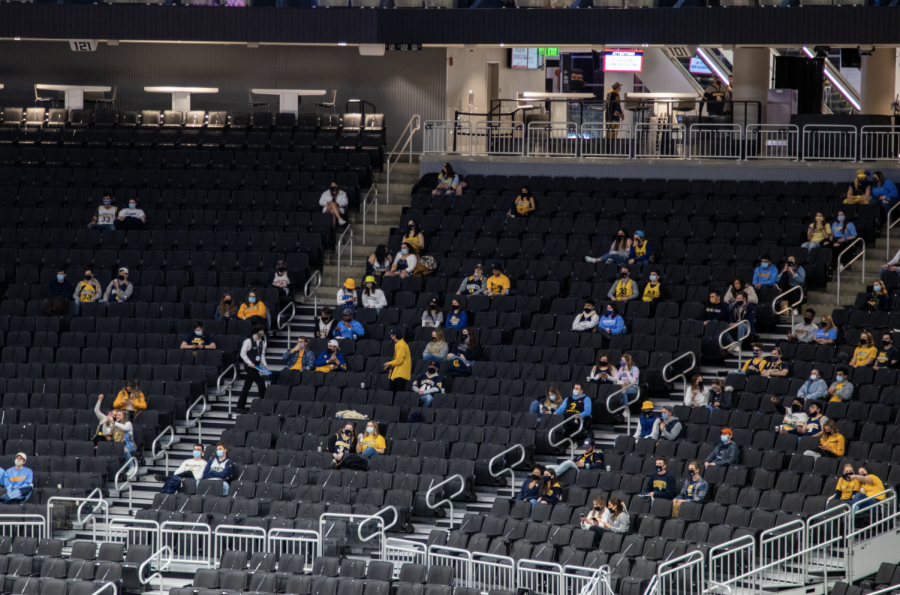 Marquette seniors who held basketball season passes last year were offered tickets to the game. While the stadium wasn't packed, spirit was high.

After some confusion and false starts, this year’s National Marquette Day was March 6, which was also Senior Day.

Marquette seniors who held basketball season passes last year were sent an email Feb. 25 about the chance to claim a ticket to the game. Among these students was Devon Plata, a senior in the College of Engineering.

“I think it’s nice that (they gave) select students tickets. If they gave seniors the first pick, it’s nice that we can see a last game,” Plata said.

The Marquette men’s basketball team played Xavier University. Tip-off was at 8 p.m., which Tyler Fairwood, a senior in the College of Engineering, said was not exactly ideal.

“It’s somewhat of an inconvenience given the uncertainty in transportation and just the fact that it’s an 8 p.m. game on a weekend,” Fairwood said. “Just in general, that’s tough and to me doesn’t have as much of an appeal given the situation of the pandemic and stuff.”

For social distancing purposes, students who claimed a ticket were given the opportunity to select one other student they wanted to sit by during the game.

Fairwood said this made him feel better about the COVID-19 precautions that would likely be in place during the game.

“The COVID-19 aspect doesn’t necessarily concern me,” Fairwood said. “Especially because when you went to order your tickets, they give you an option to sit with people you know and you just have to give their name. You can sit by yourself, so no one else around you. Or the third option was that you just didn’t care, so presumably they just put you wherever there is room.”

Plata said she might have gone to a watch party, but not if it were a school-sanctioned event.

Fairwood said he would have preferred a private watch party altogether.

“Part of me would rather spend my last National Marquette Day just hanging with my friends all day than like three of us or four of us being able to go sit at a game and watch some probably extremely average basketball from Marquette,” Fairwood said.

Nicole Tucker, a senior in the College of Arts & Sciences, said she also did not feel too worried about COVID-19 precautions for the game.

“I feel like the game is pretty safe with it because everyone’s spread out and then you just have to give them your MUID and name of who you want to sit by,” Tucker said. “So I feel like that’s a safe way to do it and you’re watching the game live. I’d much rather watch a live game than go to a watch party.”

Nonetheless, Fairwood and many other Marquette seniors attended the game against Xavier March 6, mostly for one reason.

“It’s our last opportunity as a student to go to a Marquette basketball game,” Tucker said. “If I wasn’t a senior, I would feel like I have more time to celebrate with the friends I’ve made here.”

Fairwood and Plata both said they wouldn’t be as interested in going to the game if they were not seniors.

“I would most definitely would feel different about going if I was not a senior,” Fairwood said. “(I) probably would be more inclined not to go.”

These seniors said they were eager to see one last game because they appreciate what NMD means for the Marquette community.

“I think it just represents Marquette pride and a bond that all Marquette students share that can bring us closer,” Plata said.

She said she was most looking forward to experiencing the game and celebrations with some of her oldest college friends.

“(I was) very excited for the last basketball game with the same friends I’ve been going to games with since freshman year,” Plata said.

“I think National Marquette day represents a personal holiday that everyone in the MU community can celebrate together,” Fairwood said.

He said although the pandemic made things different this year, he was hopeful for a positive experience. He said all he was looking for was a good Marquette win. Fortunately for him, Marquette beat Xavier 66-59 this past Saturday.

“Compared to the other NMDs the atmosphere was definitely a lot more mellow, obviously due to the decrease in attendance allowed,” Fairwood said. “I still had fun though, it was an entertaining game and MU came out with a win, so not much to complain about there.”

Plata said she was glad she went, even though things were not at exciting as they had been in the past.

“It wasn’t as hype as other games because the student section wasn’t packed and we couldn’t stand. It just wasn’t the same,” Plata said. “I’m still glad I went since it was my last chance as a student, but I’m not sure how I would feel if I wasn’t a senior. It just was not as fun as when all my friends and the other students and fans were there.”

Even though the stadium was not packed with fans this year, Marquette spirit was still high at the game.

“The best part of the game was probably that even though the stadium wasn’t packed everyone was excited to be there and the chants still carried through the stadium since it was only Marquette fans at the game,” Plata said.

Fairwood said his favorite part was seeing the senior ceremony just before the game began.

“It was cool to see the guys in the same class as myself get a formal send-off after watching them play over the last four years,” Fairwood said.

All in all, Plata said this was an experience she was thankful to be able to have.

“I’m grateful Marquette did their best to still have a National Marquette Day and a senior day even with the pandemic,” Plata said.