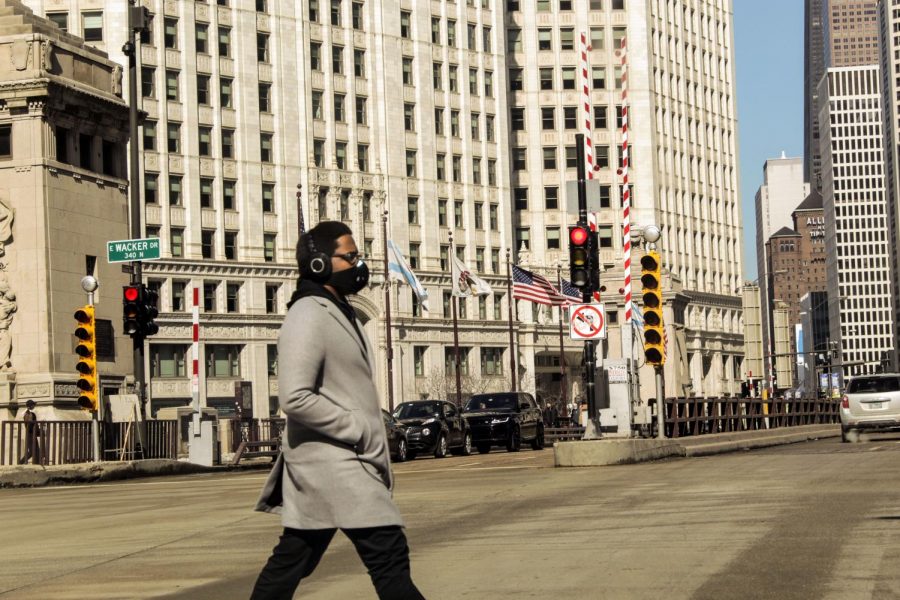 A pedestrian walks down a street in Chicago.

Although COVID-19 has caused much of the world’s activities to stop, international conflicts continue to occur, with nations’ responses to the pandemic highlighting pre-existing issues of equity and an instinct toward focusing on domestic responses during times of crisis.

Across the board, Marquette international affairs professors say that most of the changes that have occurred during the pandemic can be seen in the responses, rather than in the types of dynamics that play out between countries. Additionally, the pandemic is amplifying existing issues, particularly inequalities
between nations.

In terms of international armed conflict, Mark Berlin, an assistant professor in Marquette’s political science department, says the pandemic has not
changed much.

“There was an attempt at the U.N. to call for some kind of global ceasefire to help kind of reduce the spread of the virus, but I don’t think there was much of an impact of that call in general,” Berlin says. “The wars that have been going on have been continuing to go on.”

A new war between Armenia and Azerbaijan that broke out in late September 2020 as a result of a decades-long conflict is another point Berlin uses to show how he believes the pandemic has not had much impact on the what he says are the “dynamics or patterns of armed conflict.”

Additionally, Berlin says tensions and nonviolent conflicts – including foreign policy battles – that previously existed now have an added dimension of struggles as a result of the pandemic. As an example, he points to relations between the U.S. and China – in particular, the ideological battle that has been occurring since the Cold War, which now has extended to the pandemic.

China, Berlin says, has been able to attribute their quick, decisive response to the pandemic as a value of their nondemocratic model, while the U.S. points to the lack of transparency from China surrounding COVID-19 case numbers and response as a value of the democratic model, which provides information more freely. While both nations track case numbers, outside of China there has been discussion about the possibility that the Chinese government has been underreporting new cases.

Dr. Richard Friman, a professor for international studies and director of the Center for Transnational Justice at Marquette, notes that the initial impulse of countries when the pandemic began was to look inward on how to combat the virus, isolating themselves from the rest of the world. Berlin echoes this sentiment, also stressing the lack of vaccine equity.

“The U.N., WHO and Gates Foundation are working on making sure that developing countries are getting vaccines, but that’s most of the effort being made,” Friman says.

COVAX, an initiative by Gavi and the World Health Organization (WHO) to provide vaccine access and equity, has identified 92 lower and middle-income economies that will be participating in this market exchange program.

Although he thinks there will be more focus on equitable access to vaccinations in the coming months, Friman sees the potential for a lot more damage to developing countries in the meantime because of new variants and changes in travel and regulations. He notes that a strategy that emphasized equity at the outset may have been able to reduce this issue.

Going forward, both Friman and Berlin say they see an outcome where vaccine equity increases.

“The optimistic view would be that, as vaccines become more available and as vaccination becomes more prevalent and stays ahead of mutations, there is a much better chance for countries to get back on track,” Friman says.

Berlin also notes the possibility of using the pandemic response as a future model for combatting other globally affective issues, such as climate change.

“It shows you that when governments do have the political will to do something like that, that you really can achieve unprecedented innovation and change,”
Berlin says.

For international affairs students, Friman says it will be integral to have knowledge of the world outside of the U.S., combating the notions of isolationism that have arisen. He also says the importance of foreign language expertise is ever-present, but Marquette is making the acquisition of these skills more difficult by cutting programs and reducing funding for these areas of study.

Hannah Schaefer, a sophomore in the College of Arts & Sciences majoring in international affairs, notes that much of her coursework has included discussions of the pandemic and its relation to many global issues of both the past and
the present.

Schaefer’s coursework also changed based on the pandemic, with one course including a unit about how pandemics affect international security and relations.

Along with this, Schaefer states that the pandemic has shown how global crises can uncover different governments’ strengths and weaknesses.

Schaefer says this has amplified her desire to study international affairs.

In terms of the job market, Berlin notes an apparent short-term detriment in the availability of jobs and internships due to the lack of travel, which is integral for many international affairs professions. When looking to the future, Berlin says it is hard to predict what market trends might be, a reality the pandemic has highlighted in every aspect of the
global economy.

Schaefer says it can be difficult to remain optimistic in the face of a pandemic. She notes that the global disease has revealed and highlighted underlying issues in countries throughout the world.

“It has caused significant upheaval and confusion that will perhaps take years for certain states to recover from, especially those who were not prepared to combat COVID-19,” Schaefer says. “The economic implications will continue to burden the lives of many people and challenge state security on multiple levels.”

In spite of this, Schaefer also finds a source of optimism, similar to Berlin and Friman, in the potential of the COVID-19 pandemic to inform governments about how to deal with pandemics in the future.