A New Type of Study Abroad 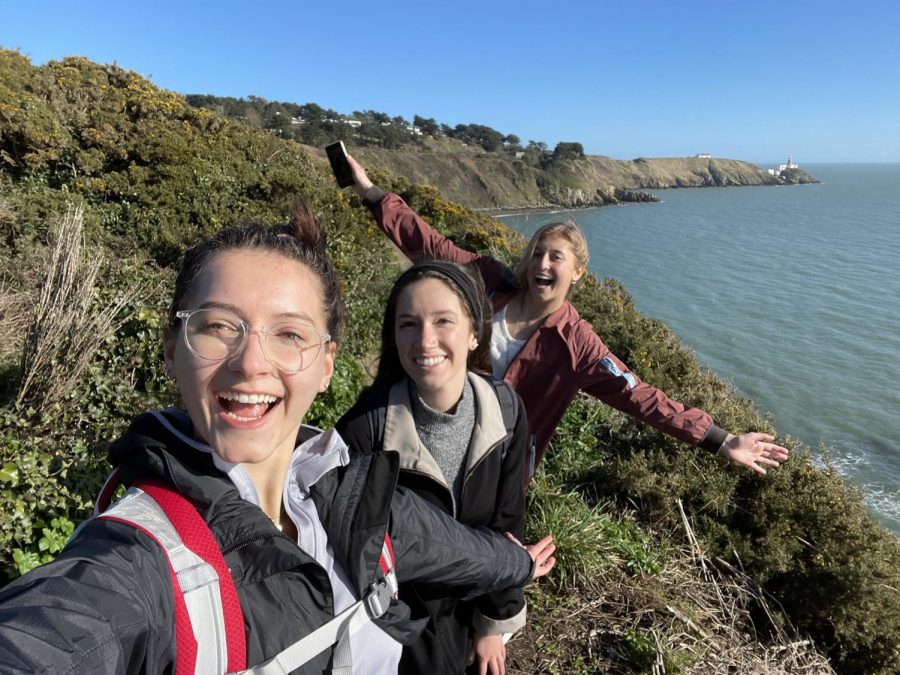 Ireland in the springtime offers an abundance of traditional tourist fare. Americans abroad may patronize pubs, revel in Saint Patrick’s Day celebrations or take day trips to neighboring nations. Throughout the past year, however, the bars have gone quiet, the parade was called off and leisure travel has dwindled.

The COVID-19 pandemic hasn’t just affected tourism. Kierney McGrath, Justyna Bochenek and Elizabeth Hall — all juniors in the College of Nursing — are three of 10 nursing undergraduates who have elected to study abroad in Dublin, Ireland throughout the 2021 spring semester. But the classes they attend are all virtual, and the nation is in the midst of its
third lockdown.

International travel has become a labyrinth of late-stage lockdowns and pandemic protocols. Weeks before the students departed for their trip, Irish Prime Minister Micheál Martin announced a Level 5 lockdown which will remain until at least April 5. Under the current Level 5 restrictions there is a significant decrease in face-to-face teaching at universities, a ban on all household visits and all nonessential retail stores are shut down.

Most restrictive to McGrath, Bochenek and Hall is the five kilometer limit on travel, which was imposed to curb surging infection rates while also giving residents a chance to exercise. While there are
exceptions for work and other purposes deemed essential by the government, residents are not allowed to leave this roughly three-mile radius. Because they are housed in on-campus apartments, downtown Dublin is barely within bounds for the students.

“We can just go up to the city and see the main streets, but that’s kind of our limit, and then we have to go back to campus,” Bochenek says.

Despite the limited opportunities afforded under lockdown, the roommates have found creative ways to explore local culture. For the first month they were in Ireland, Mcgrath, Bochenek and Hall “were 100% green,” they joke.

“We used no public transportation, nothing. We only biked or walked, which is pretty impressive,” laughs Hall. “We’re not free-roaming around Ireland, but we’ve been to all the neighboring towns and really gotten to know Dublin.”

In a normal spring semester, the Office of International Education (OIE) averages 150-175 students in study abroad programs. In the 2020 spring semester, for example, 164 students travelled abroad, according to the OIE.

But the pandemic caused an unprecedented suspension of numerous trips last year. By mid-March of 2020, six students had withdrawn, 11 had decided to remain abroad and 150 had come home. The students that came home completed the
semester virtually.

Kelly Ells, a senior in the College of Nursing, says she feels like she left Dublin with unfinished business. Ells and her roommates departed Ireland just days before Saint Patrick’s Day, having only spent two months abroad for the 2020
spring semester.

“I hadn’t even gone on half the trip, and I hadn’t finished any of the things I wanted to do.” Ells says. “I was so sad.”

Festive outfits she and her friends had purchased for the Saint Patrick’s Day parade went unworn, tucked into carry-ons and suitcases for the premature return flight. The abrupt halt to the Dublin program was disappointing but understandable to Ells, who had spoken with other Marquette students in Milan that also went home.

“All of Europe was shutting down,”
she says.

During the 2020 fall semester four undergraduate students were abroad — two in Ireland, one in Spain and one in France. While the OIE expected around 40 undergraduates to participate in study abroad programs during the current spring semester, less than half of that ultimately committed. In addition to the ten students in Ireland, there are seven in Greece, Thailand and Spain, according to the OIE.

Although students are traveling in lower numbers than in years past, Karli Webster, director of study abroad, says the office is committed to continuing programs.

“Participating in an education abroad program is recognized as a high impact cocurricular practice that many participants have described as life-changing,” Webster says in an email.

In order for students to continue to safely pursue these experiences, Webster and the OIE considered dozens of factors, including health and safety guidelines, which partner institutions and host countries were still accepting incoming students and whether embassies were open to provide visa documents.

McGrath, Bochenek and Hall agree they feel safer in Ireland than they did in America, although some locals they’ve spoken with voiced confusion at their presence in the country.

“It’s safer here knowing things are closed down,” Bochenek says, adding that none of the roommates are worried about COVID-19. “When we meet Irish students, though, they’re like, ‘isn’t everything open in America? Aren’t your bars open? Why wouldn’t you stay?’”

Although the 2021 spring semester trip to Dublin has been unconventional, McGrath, Bochenek and Hall say they appreciate the challenge.

“You just learn and gain so much from being thrown into this whole experience where there are so many unknowns,” Hall says. “You have to figure it out and make the most of it.”