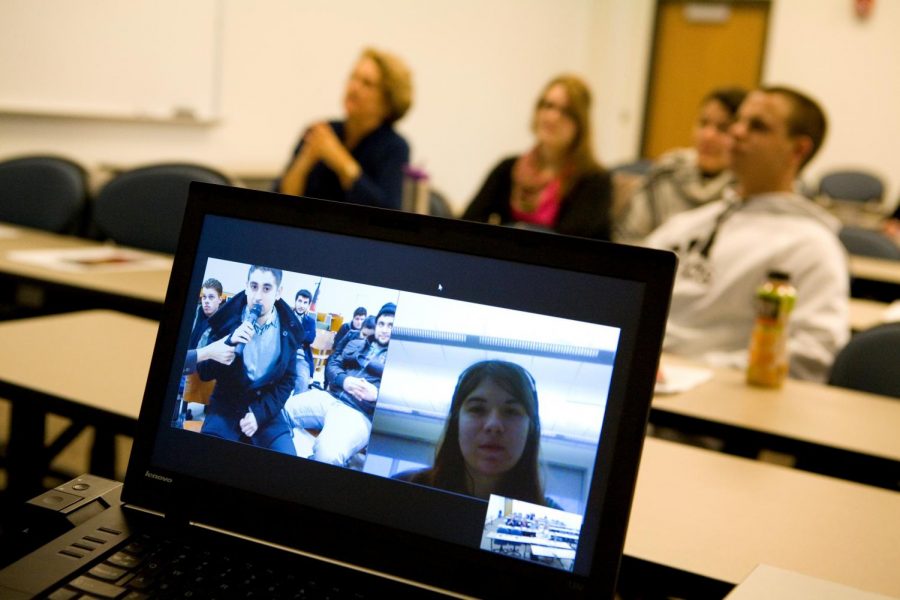 Adjunct instructor of journalism Sandra Whitehead was familiar with online classes long before the COVID-19 pandemic.

During the spring of 2009, Whitehead, who has been teaching at Marquette since 1988, took a graduate-level course at Marquette focused on facilitating online classes. Afterwards, she continued taking classes on the topic through Marquette’s Center for Teaching and Learning.

She then moved to Lebanon and taught in person at Rafik Hariri University from 2009 to 2016, while simultaneously teaching media writing at Marquette virtually. Since 2010, Whitehead has incorporated international collaboration projects in her classes, giving students the opportunity to engage with others across the globe.

During the 2016-17 academic year, Whitehead was on sabbatical from Rafik Hariri University and returned to teach in person at Marquette. In spring 2017, she taught a class on international reporting at Marquette for the first time.

In Whitehead’s international reporting class, she takes students virtually to Lebanon, where they talk with students at Notre Dame University, a Catholic university in Lebanon not affiliated with the University of Notre Dame in Indiana. Even if a semester is taught in person, Whitehead’s classes still interact with the students in Lebanon using an online format.

“At Marquette, we’re right in the middle of America, so the rest of the world is so far away or feels so far away, but our local news, our national news … they’re all globally intertwined,” Whitehead says.

Whitehead says she became interested in the subject of stereotypes on an international level partially because she has an Arab American family and she taught abroad in the United Kingdom and Japan after college.

“I was always interested in how people could know the realities of somewhere else,” Whitehead says.

Whitehead’s collaborative projects connecting with students in Lebanon extend to other classes she teaches at Marquette besides her class on international reporting.

Whitehead says teaching these classes requires a lot of collaboration between professors.

In order for the projects to go well, both professors in each project must adopt each other’s approaches to make sure everybody stays on task.

Whitehead’s most recent international reporting class at Marquette was in fall 2020.

“This last semester was awesome. … There were some people in class who were planning to work internationally … they were more invested,” Whitehead says.

While Marquette allowed in-person classes that adhered to social distance policies during the fall semester, Whitehead had to teach the class in a fully-virtual setting, because she was stuck in Saudi Arabia visiting her daughter, unable to return home to Milwaukee due to COVID-19 travel restrictions.

She eventually was able to return to Milwaukee around the time of the election in November.

In the class, students engaged with other students in Lebanon through a Facebook group, where they discussed issues of the pandemic and what they were experiencing.

Sanya Sawlani, a senior in the College of Communication, took Whitehead’s class in the fall.

“It was cool because we obviously are very different, but our lives as students in a pandemic were very similar,” Sawlani says, referring to the similar social distancing restrictions and expectations for life after COVID-19.

Sawlani also says it was particularly interesting and emotional to discuss issues with students in Lebanon because the explosion in Beirut was very recent when they were all in the class.

Sawlani was referring to the explosion in August in Beirut, where nearly 200 people were killed and more than 6,000 were injured. According to the Wall Street Journal, the explosion “occurred when a fire at a warehouse—Hangar 12—on the city’s waterfront ignited a cache of ammonium nitrate, an explosive material that had been stored at the site for more than six years.”

“There was one student … who showed us the artwork he made as a way of channeling his emotions from the blast,” Sawlani says. She says it was different to get a first-hand account, rather than just read news about the subject.

Following the Facebook group, the students used the knowledge they gained and wrote an international reporting story. Sawlani wrote about arts and culture.

Jack Ryan, a senior in the College of Communication who also took Whitehead’s class last semester, says the reporting projects helped him learn how to write for a global audience.

“It did a really good job of showing individuals … particularly at Marquette, different cultures,” Ryan says.

Ryan also says that the Facebook group was really insightful following notably difficult summers in both countries. Ryan mentions that it was an incredibly interesting to hear about how students went about their lives in a different country after dealing with trauma.

He says he really enjoyed learning how journalism was different in Lebanon and the United States.

“It’s really important for every journalism student to have exposure to international reporting,” Whitehead says.

Kelli Arseneau contributed to this report.

Sanya Sawlani and Jack Ryan previously were employees with the Marquette Wire. Neither had any role in the reporting or editing of this story.