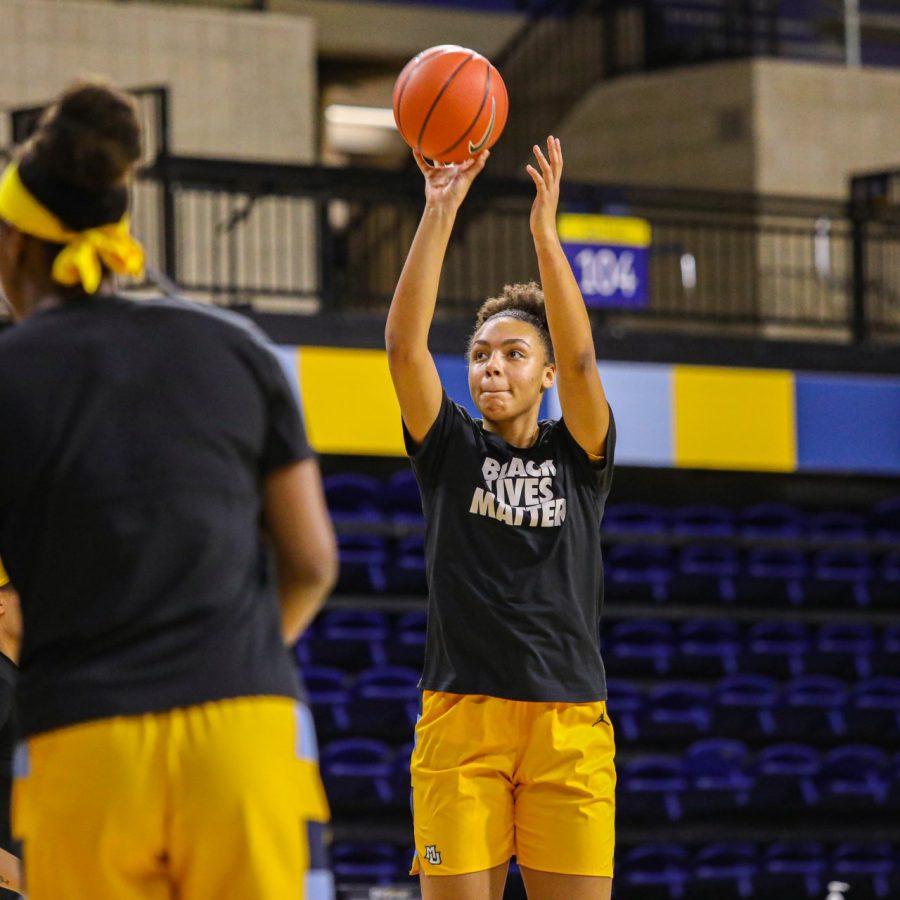 For some students in Marquette’s athletic program, the opportunity to play a sport at the Division I level brings them thousands of miles away from their homes.

While some Marquette athletic teams have more international athletes than others, a common goal for many coaches is to help their foreign players acclimate to the environment and culture of Milwaukee.

For Lara Kaiser, a first-year women’s tennis player from Vienna, Austria, Marquette was a perfect fit for her both in terms of the city and the team she was joining.

“I wanted a smaller campus, but I wanted to stay in a city. I couldn’t imagine myself in a countryside type of place,” Kaiser says.

Of the nine players on the women’s tennis roster, six of them are from outside of the U.S., ranging from Canada all the way to New Zealand. Kaiser says her teammates sharing the experience of traveling from another country was one of the main reasons she came to Marquette.

“I looked into other schools and they almost all had only Americans,” Kaiser says. “The first time I met them (my teammates) we had a connection. They were a huge help to me in the first few weeks.”

Kaiser says having people to relate to in terms of being from another country and learning the ways of Milwaukee immediately made her experience of moving overseas easier.

Another player who had connections to Marquette before stepping on campus is Sam Thornton, a redshirt junior forward on the men’s soccer team.

Thornton is from Rotherham, England, and joined a team with a head coach in Louis Bennett and two assistant coaches in Sean Hughes and Graham Shaw, who are both from England. The roster currently also has two other players from England: sophomore defenseman Harvey Read and redshirt sophomore goalkeeper Chandler Hallwood.

“I had a great relationship with the coaches from the start,” Thornton says. “They know where I’m from and they expressed what it would be like to come here from England and made me feel at home.”

His coaches also were able to acclimate him to the style of play in the United States and the BIG EAST, which Thornton says is much faster and different due to the level of interest in the sport in America versus England.

“Back home soccer is the main sport, sometimes people kind of just go through the motions,” Thornton says. “Here, the sport is on the come up in general but at Marquette every practice feels like a final. There’s a competitive edge and an intricate, direct style of play.”

One athlete who is new to Marquette this year is going through the experience of being the only foreign player on her team: first-year forward for the women’s basketball team, Julianna Okosun.

From Copenhagen, Denmark, Okosun played for the Denmark U-16 and U-18 junior national teams and has since been named to the country’s women’s national team.

The 6-foot-4 forward says that despite being the only player on her team from outside the U.S., her teammates and coaches have been a huge help in welcoming her to the team and the city.

“I don’t think they always realize how far away Denmark is,” Okosun says. “They’ve all been super supportive though, and the coaches in particular have helped a lot since some of them have experience playing overseas.”

Okosun remembers one time when she was in an airport in Denmark with her national team and people approached her to ask what team they were. Even some Denmark residents did not know the country had a national basketball team.

Aside from the difference in popularity of basketball, Okosun says there are many similarities between Milwaukee and Copenhagen.

“I speak English and the culture is similar in many aspects, which helps me a ton,” Okosun says. “The size is roughly the same but one difference is that there are much less people on the streets here because more people choose to drive.”

Okosun says her comfort with campus went a long way in her adjustment to Milwaukee and Marquette.

Being comfortable at Marquette is something Kaiser struggled with at first, but she says it is one of the biggest accomplishments so far in her short time in Milwaukee.

“It was difficult at first because I was used to seeing my parents and family everyday and suddenly that was just gone,” Kaiser says. “Talking to my mom every day on the phone helped, my teammates helped and now I truly feel like I belong here.”