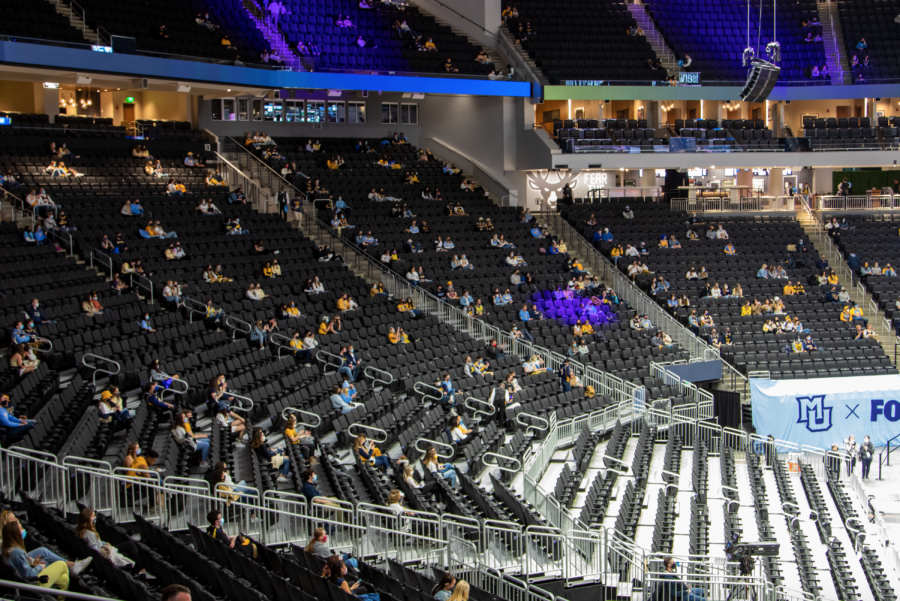 A select number of fans were allowed into Fiserv Forum on National Marquette Day.

On Nov. 5, 2020, Marquette Athletics announced there would be no fans allowed to attend Marquette basketball games for the rest of the calendar year, but Marquette students still remained hopeful to be back in Fiserv Forum by the end of the season.

That news left the Marquette community not only disappointed, but curious as to how they would support their favorite team from outside the stadium this year.

Many students and Marquette basketball season ticket holders, such as juniors Daniel Dunn and Jack Cyganiak, had the challenge to find different ways to “ring out ahoya” this season.

“At first I was pretty upset to hear about the news because I’ve been going to games ever since I was little. My parents also attended Marquette,” Dunn says. “I feel like it’s a Marquette staple to attend the basketball games and being in that environment, but from a safety aspect I totally understood.”

Growing up in Milwaukee, Cyganiak has also attended Marquette basketball games his whole life, watching games from the Bradley Center to Fiserv Forum, so the news also came as a dismay to him.

“It was obviously very disappointing to hear the news and find out the city of Milwaukee wouldn’t be able to support the local team in the stands this year,” Cyganiak says. “The games are always fun to go to, rooting on the team in a competitive conference every year.”

Since fans had to watch the Golden Eagles through the big screen this season, students like Dunn and Cyganiak spent different ways showing their support for their school.

“My friends and I have gone out a couple of times to watch the games, but most of the time we’ve just put it on the TV at home,” Dunn says. “It’s been nothing too crazy and definitely doesn’t compare to being at the game in-person, but it’s about supporting the team that matters.”

As for Cyganiak, he’s taken this opportunity to watch the games downtown at restaurants such as Brat House and Uncle Bucks on Third while maintaining social distancing in a safe manner.

“Usually for the weekend games I’ve been going out with my friends and enjoying the games downtown,” Cyganiak says. “It’s been pretty manageable all around thanks to the COVID-19 guidelines enforced at the restaurants, so I’m glad we’re still able to do that, but it’s definitely not as fun as going into Fiserv Forum and cheering in person.”

Hope for a return to normalcy came March 6, 2021 when the university allowed as many as 1,800 fans back into Fiserv Forum to watch Marquette take on Xavier on National Marquette Day.

For some students such as sophomore Andrew Forowycz, the opportunity to get back into Fiserv Forum on National Marquette Day was too good to pass up.

“It just felt so surreal to be back at Fiserv,” Forowycz says. “Nothing can compare to getting a much needed win on National Marquette Day while enjoying it with your friends.”

The university also announced on March 1 that it is planning to have fully in-person classes starting in the 2021 fall semester, which could lead to the decision of bringing more fans to Fiserv Forum come October.

Just the thought of attending Marquette basketball games in person again for soon-to-be seniors such as Dunn and Cyganiak is inspiring.

“I just think simply getting back into Fiserv Forum would mean the most to me,” Cyganiak says. “I think it will not only be a great feat for the Marquette community, but a feat for the entire country in general. The fact that people are going to start coming back into stadiums is a huge accomplishment, especially for the Marquette community who has been missing out on games this year.”

This story was written by Sam Arco. He can be reached at sam.arco@marquette.edu or on Twitter @_sam_i_am119.