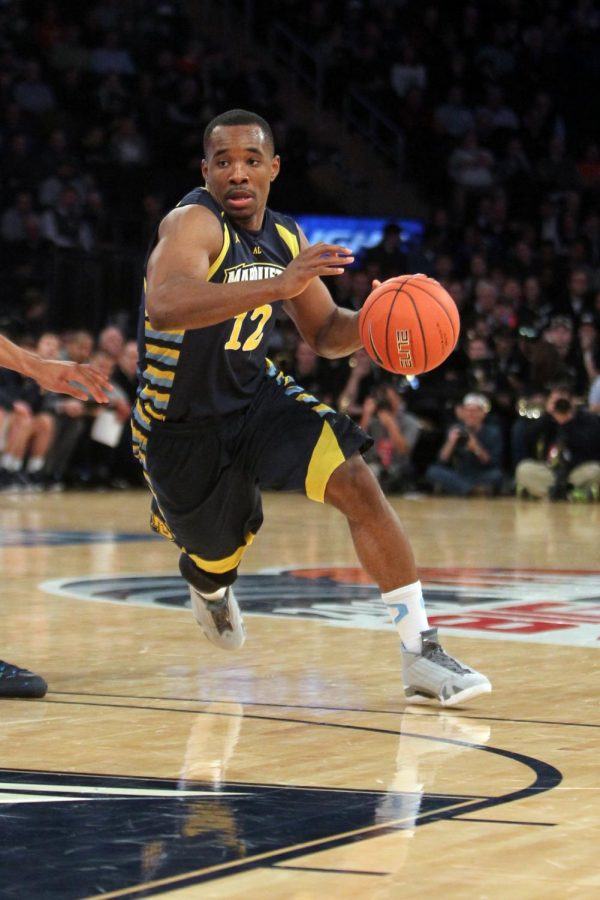 Over the years, Marquette basketball has been known for its development of professional talent.

From Doc Rivers to Dwyane Wade, the school has prepped some of the game’s biggest stars at the highest level.

In 2019, Marquette sent through its first woman to the WNBA, as Natisha Hiedeman broke the glass ceiling for the Marquette women’s program.

Amidst the talks of Marquette greats such as Travis Diener, Steve Taylor Jr. and Allazia Blockton, many seem to forget about the players who go on to represent the university overseas after graduation.

When players from Marquette who may have led in scoring or earned conference and national accolades head overseas, they may not be as revered and loved as when they were in Milwaukee. Additionally, there are added obstacles to moving to another country to play basketball – things that could deter a player from playing at his or her full potential.

Some of Marquette’s most notable names were unsuccessful in their quest of making it to the NBA or WNBA, but found comfort in the fact that their talents could be used overseas.

Steve Taylor Jr., who played for Marquette from 2012 to 2015 before transferring to Toledo for his final season, explains the process of deciding to play overseas after he went undrafted in the 2017 NBA draft.

“Once I didn’t get drafted … you don’t think negative and that it’s over,” Taylor says. “During that time the money in the G-League just wasn’t what my agent and I thought was good, so I looked elsewhere.”

Another Marquette player that ventured across the ocean was Luke Fischer, a center that played three years for the Golden Eagles from 2014 to 2017 after transferring from Indiana University Bloomington. Fischer says a key factor that influenced his decision to play overseas was his connection with a prominent Golden Eagle.

“I had a really good relationship with Travis Diener,” Fischer says. “He was a great contact for me because he had a great NBA career and ended up playing six or more years in Italy.”

Even with Fischer’s feeling of uncertainty regarding making the move overseas, Diener, who had a stellar four-year career with the Golden Eagles in the early 2000s, aided Fischer in his decision to play in Europe. Diener had told Fischer that there is not anything wrong with playing overseas, and that Fischer would be playing against top-level competition while making good money.

One of the main differences that athletes face in all sports when venturing to play in international territories is overcoming the language barrier. This is something that former Marquette women’s basketball player Allazia Blockton has had a variety of experiences with.

“Fortunately I have been on teams where mostly everyone speaks English and only one where hardly no one did, and I had the toughest time there because a lot of the time I was confused,” Blockton says, recalling her time playing for the Club Deportivo Promete basketball team in Spain, where she had an easy time fitting in as an English-speaker, in comparison to her experience with Osnabruek in Germany where the language barrier was more restricting.

A difference in dialect is not just present on the court but also in everyday life as players get accustomed to a living in a foreign community.

“It does get a little iffy when you’re out and about and someone is trying to say something to you at a grocery store,” Fischer says. “But luckily we have Google Translate now, (so) there’s always ways to work around it.”

Fischer had nothing but good things to say about the language that was used on the court. After playing in leagues such as the Spanish Cup, German Cup and Euroleague, Fischer says he found great comfort in knowing that “English is the universal basketball language.”

Another difference that former Marquette men’s basketball alum Derrick
Wilson saw in the way the game is played
overseas was the tempo that controls the game.

“I think I had to get used to … the change of pace, and also everyone’s skill and being a professional,” Wilson says.

As a five-year international veteran, Wilson has played in both the Danish Basketligaen League and the Turkish Basketball League (TBL) for a different club every year.

Another modification to basketball overseas is the different rules for players on the court.

Wilson says some of the differing rules include the concept of traveling in regard to a player’s pivot foot, which can limit someone’s athletic ability because a player can’t sweep through a defender with the ball. Additionally, a player has to cross jab when they want to dribble, or else it is considered a travel by the referee. Also, after a shot hits the rim, players are allowed to tap the ball into the net or swipe the ball away as opposed to the NBA, where those actions would result in a goaltending call.

While some players experience a new life through international basketball, for many, the ideals and lessons learned at Marquette along the way are engraved within them. One thing that Blockton remembers fondly from her time at Marquette is the intensity.

“I think the most important thing I learned at Marquette is how to handle adversity throughout my whole career,” Blockton says.

Hard work and dedication also resonated with Taylor Jr., as he got his motivation from Marquette’s previous men’s basketball coach Brett Williams, or as many people refer to him, “Buzz.”

“I’ll never forget how hard Buzz made us work,” Taylor Jr. says. “Everything was a competition … that’s one thing that stuck with me since I left Marquette.”

Over the course of Taylor’s time at Marquette, he went 56-43 under coach Williams.

Fischer currently has a familiar face playing beside him for Orleans Loiret Basket in Orleans, France: former Golden Eagles Darius Johnson-Odom, who played for Marquette from 2009-2012. The pair are now teammates.

Although Fischer and Johnson-Odom played at different times for Marquette, they both bond over their times playing for the die-hard fans at both the BMO Harris Bradley Center and Al McGuire Center.

Derrick Wilson, who was able to play at Marquette for the entirety of his collegiate career, did not realize the esteem and appreciation that the name Marquette holds, not only the United States, but in the rest of the world as well.

“I didn’t realize how much the name Marquette meant and how much it’s respected by other players in the basketball community all across the world,” Wilson says.

This story was written by Jack Lewandowski. He can be reached at jack.lewandowski@marquette.edu or on Twitter @JackLewMU.