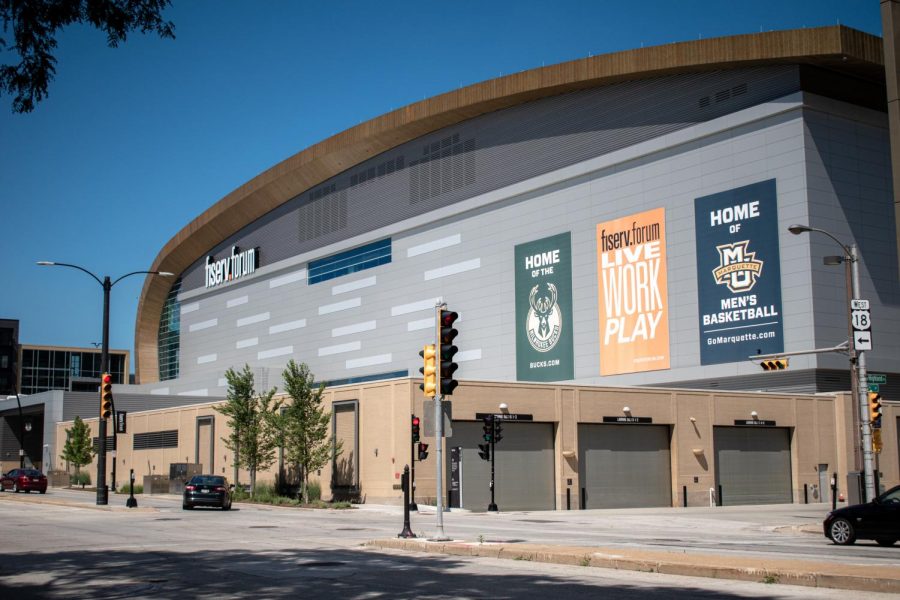 The 2021 National Marquette Day men's basketball game will be held March 6 at the Fiserv Forum.

Marquette University’s decisions to sponsor certain in-person student events during the ongoing COVID-19 pandemic is unwarranted, highlighting a want for profit rather than a safe, student experience.

Provost Kimo Ah Yun announced Jan. 28 that commencement for the class of 2021 would be virtual this year, rather than in the Fiserv Forum where it was planned to take place.

“In the ongoing interest of public health and safety during the global COVID-19 pandemic, we have made the difficult decision to hold all virtual spring 2021 Commencement events,” Ah Yun said in the announcement.

Ah Yun also said this decision was made in consultation with local and national medical experts, and that if there was a possibility for a hybrid event to be held for commencement, students would receive information about it during the spring semester.

Despite commencement taking place at the end of May, Marquette announced that the celebration would be canceled only three days into the spring semester.

Yet, Marquette Athletics announced Feb. 25 that it would be releasing 1,800 tickets to Marquette students for the March 6 National Marquette Day men’s basketball game.

This decision was made due to the Milwaukee Health Department and Bucks’ plan to allow for 10% capacity for Marquette games, which is 1,800 attendees.

Despite many students not having received COVID-19 vaccines on campus and the ongoing pandemic, the National Marquette Day announcement was made less than two weeks before the event.

Marquette Athletics said seating during the game will be socially distanced and there will be other health guidelines in place, such as mandatory mask wearing. However, allowing students to attend this game and encouraging this in-person event, but not in-person commencement that Marquette seniors have looked forward to their entire academic career this spring shows that the university is not prioritizing the best interest of all students; The university is prioritizing basketball.

As of fall 2020, there are 2,052 undergraduate students for the senior class of 2021, according to the Office of Institutional Research and Analysis. With only a roughly 200 person difference between how many people are allowed into Fiserv on National Marquette Day and the 2021 senior class, the university’s decision to let students go to the arena for a game, and not commencement, is absurd. Though Fiserv Forum ultimately gets the last call on how the arena is used, Marquette continuing to encourage students to attend a game and not find an alternative, safe route for rising graduates is not only selfish, but disheartening.

If nothing else, the university should be making more of an effort to hold an in-person commencement, as commemorating four years of hard work and memories is significant for graduating Marquette students.

The cancellation of commencement being made in January when the event is in May was premature and confusing, as last week, University President Michael Lovell announced that the university is planning for in-person classes as well as on-campus residential living. Lovell said a reason this is a possibility is that access to COVID-19 vaccinations across Wisconsin are increasing.

Lovell’s confidence in hosting an in-person fall 2021 semester and the National Marquette Day game, speaks volumes to what the university’s priorities are. If Lovell is confident in the vaccine rollout, and President Joe Biden had just said all adults should be vaccinated by the end of May, the commencement should not have been canceled, at least not yet.

The university’s decision was in essence premature as many large decisions and events are still up in the air as the coronavirus pandemic is ongoing.

The university needs to be more transparent about its decision-making process and ensure that all student voices are being heard.