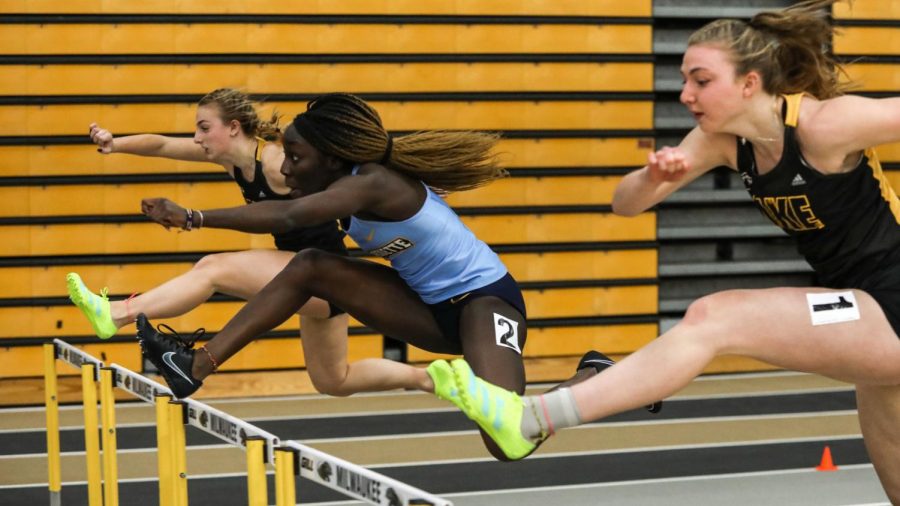 Breaking a school record is by no means an easy feat, and doing it as a sophomore makes it that much more special for Marquette track and field hurdler Juru Okwaramoi.

Okwaramoi posted a time of 8.10 seconds in the 55-meter hurdles at the Parkside Triangular #2 meet Feb. 20, beating the previous mark of 8.27 set by Chris Spindler back in 1993.

“I think I found out about 15 minutes after my race that I had beat the record,” Okwaramoi said. “It was funny too because after I finished my race my coach and I were like, ‘yeah it could’ve been better,’ but overall we were both still happy with the performance.”

Despite not participating in a competitive meet for almost a year due to COVID-19, the Baltimore native breezed past the nearly 30-year-old record in only her third meet of her sophomore season.

“I always thought about breaking the record in the back of my head, but I hadn’t hurdled in over 11 months and I’m still getting back in shape and in the swing of things, so it kind of took me by surprise that I broke it this early in the season,” Okwaramoi said.

As for head track and field coach Bert Rogers, Okwaramoi’s success on the track does not come as such a shock.

“Juru’s such a hard worker and is starting to become a student of her craft,” Rogers said. “She is naturally very fast and she’s starting to make the most of her potential, as you can see already.”

Coming into the season, Okwaramoi had been a huge part of the women’s team’s success when it came to several sprinting events. As a first-year in the program last season, she ran the third-fastest 60-meter hurdle time in school history with a time of 8.85 seconds and was also involved in the third-fastest 4×400-meter relay, with a time of 3:47.74 at the indoor conference championships.

With one record down in the books, Okwaramoi is not stopping there.

“I really want to break the 60-meter hurdle record at some point, I think I have a really good shot at it, and it would be awesome to break another record,”Okwaramoi said.

As for the rest of her goals for the season, Okwaramoi wants to shift focus on accomplishing success with her all of her teammates and bringing back some hardware to Milwaukee.

“When it comes to outdoor season, I want to focus more on the team aspect and performing well in the 4×400-meter relay and as a team placing well at the BIG EAST Conference Championships.”

With many high aspirations in place for the remainder of the season, Rogers can attest that no record is safe when the sophomore is at her best.

“I feel like any of the women’s hurdle records are definitely in danger, whether that’s this year or in the future,” Rogers said. “Only time will tell, but she definitely has the potential to do something special here at Marquette.”

Since she is only a second-year athlete in the program, Okwaramoi believes she still has a lot to learn and knows there is much more to come on the track in the following years.

“I think the most important thing is just trusting the process,” Okwaramoi said. “I know I tend to rush wanting to be good and having a PR at every meet, and I know that’s just not a feasible expectation. I just have to be patient with my training and trust that it will lead to great results.”

Trusting the process requires taking every step one day at a time, and in a year full of unknowns, many athletes such as Okwaramoi are finally realizing how important it is to truly take it one day at a time, because you do not know what tomorrow will hold.