Men’s lacrosse comes up short in barn-burner against Villanova 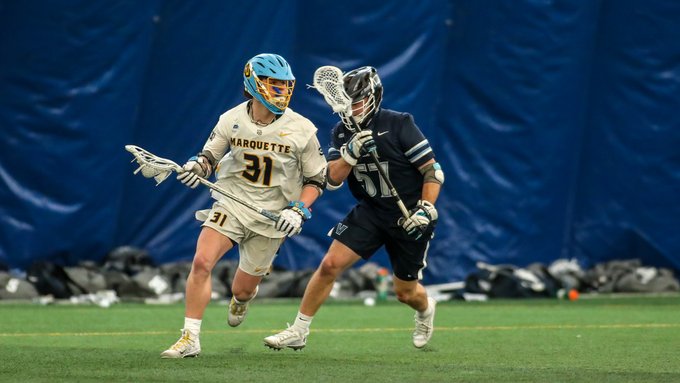 The Golden Eagles fell to the Wildcats 16-14 at the Valley Fields Dome Saturday. (Photo courtesy of Marquette Athletics.)

The Marquette men’s lacrosse team came up short Saturday afternoon against the Villanova Wildcats, by a score of 16-14.

Marquette now drops to 0-2 on the season with a 0-1 conference record in the BIG EAST. The first quarters were low scoring for both teams, but that all changed at once as each team had an explosive seven goal stunt in the second quarter.

Villanova junior midfielder Matt Campbell had a breakout performance for the Wildcats, scoring five goals, which rivaled his previous outing against the Golden Eagles in 2019 where he tallied up seven goals.

However, when all hope seemed lost, Marquette looked to redshirt first-year attacker Devon Cowan for some support and he showed up. With four goals and two assists, Cowan was able to keep the squad’s spirits alive.

Head coach Andrew Stimmel went with a different approach today in goalkeeper’s net as John Hulsman started, rather than Sean Richard. It was Richard who played in goal last week 10-9 loss against Denver. After giving up nine goals in the first half, redshirt junior Gabe Stein took Hulsman’s place for the second.

A tough start to the second half resulted in MU giving up four more goals. Stein was able to settle down in the fourth, only letting up three in the fourth quarter.

Despite the Golden Eagles only ending the game with five less face-off wins than the Wildcats, Marquette lost a valued player when he was needed most due to face-off penalties late down the stretch. Thomas Washington racked up three face-off violations, which resulted in a minute and a half worth of penalty kill for the Golden Eagles, not including Washington’s illegal stick penalty that cost the Golden Eagles a three minute penalty to start the second half.

Marquette now works to adjust minor details before a big anticipated matchup with No. 5 Georgetown in the nation’s capital next weekend. The game is set for 11 a.m. Central Standard Time.

This story was written by Jack Lewandowski. He can be reached at jack.lewandowski@marquette.edu or on Twitter @JacklewMu.