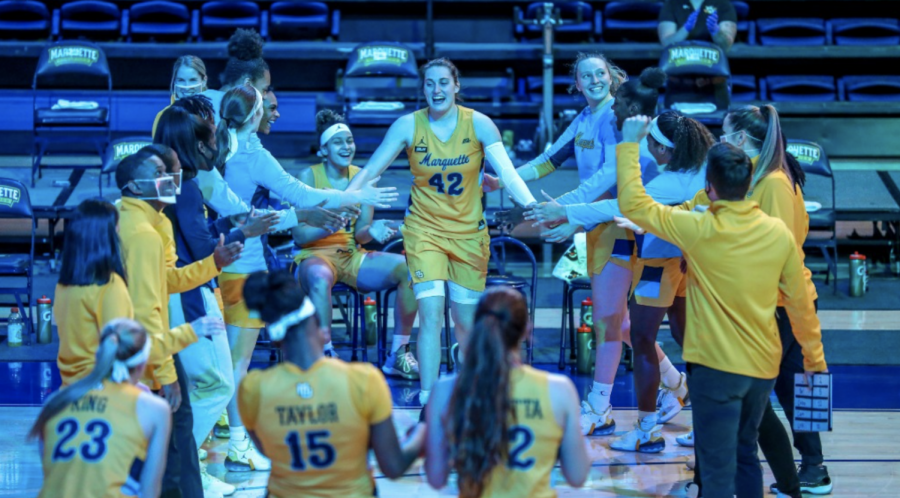 Lauren Van Kleunen (42) being introduced prior to Marquette's 89-40 win over Providence on Dec. 4 2020. (Photo courtesy of Marquette Athletics.)

It was the summer of 2016. Lauren Van Kleunen just graduated from Mason High School. The Mason, Ohio, native made the roughly six-hour journey to Milwaukee to begin acclimating to the start of her college basketball career.

However, as the summer progressed, Van Kleunen’s path took an untraditional turn.

A health issue forced her to redshirt her first year.

“I was diagnosed with blood clots in both my lungs going into my freshman summer here, it was a big change,” Van Kleunen said. “I was trying to come back and I think it was a little bit of my competitiveness wanting to come back but I knew I wasn’t ready to play.”

But for Van Kleunen, it was one of many curveballs experienced over the last six years.

After talking with then-head coach Carolyn Kieger, Van Kleunen took the option to redshirt and began working with the practice squad.

“Anytime you have a whole year to develop and just continue to hone in your skills I think is huge, so it was definitely great to have that,” Van Kleunen said. “Being able to come in my redshirt freshman year, to be able to play and have that confidence was great because I knew I had seen a lot of situations those girls were in when I was on the sidelines.”

In that redshirt first-year season, LVK, one of several nicknames she has on the team, averaged 4.7 points and 3.5 rebounds in 34 games played with eight starts.

It was not until the latter half of her redshirt sophomore season that Van Kleunen began to see an increased role on the team.

With then-senior forward Erika Davenport suffering a lower body injury in February of that year, which kept her out for the rest of the season, Van Kleunen had an increased role to give MU some presence down in the post.
Forming into new role
Last season, Van Kleunen experienced several changes. From Megan Duffy becoming the program’s new head coach after Kieger left to be the head coach at Penn State to finding herself in a new role, last year was an adjustment for LVK.

Raterman had previously coached against Van Kleunen when she was an assistant varsity coach at Kettering Fairmont High School in Ohio.

The former Dayton standout said from the moment she joined Duffy in Milwaukee and arrived on campus prior to the 2019-20 season, Van Kleunen remained in the team’s offices to offer her help and answer any questions there might be.

“I’ll never forget when Coach Duffy called me to come up here and then when I first got to meet her, I was blown away,” Raterman said. “And that’s kind of just how she lives her life and how she’s been so helpful for us in this transition. It’s not about her, it’s not about two different coaching staffs the whole time, it’s been about Marquette and how she can get this program to the best it can be.”

Raterman mentioned Van Kleunen’s toughness and resilience have stayed the same between the high school version and college version of her forward.

“She just brings that toughness that Marquette basketball right now is all about and that’s something we (have) constantly challenged her with too,” Raterman said. “She wants to be challenged, she loves going one-on-one, loves a shooting challenge. And that’s been really fun for me as a coach. I can give her a little information or I can challenge her in different ways.”

After starting out the 2019-20 season coming off the bench, Van Kleunen earned her first start of the season Nov. 11 in a non-conference game against Illinois State. In 28 minutes of action, Van Kleunen scored 14 points and grabbed six rebounds.

She would start all the remaining 28 games, which would lead to a breakout season for the Golden Eagles.

In 32 games, Van Kleunen averaged 11.8 points and 5.9 rebounds. Her scoring and rebounding performances placed her 18th and 16th overall in the BIG EAST in those categories, respectively.

Additionally, she earned All-BIG EAST Tournament Team honors after averaging 15.3 points, 6.3 rebounds and 1.6 assists in MU’s three games in the tournament.
Redshirt senior season
Come March 11, it will be exactly one year since the entire country, including the sports world, was forced to shut down because of the emergence of a virus called COVID-19. For many, including women’s basketball forward Lauren Van Kleunen, they were forced to find new hobbies during quarantine.

For Van Kleunen, it was creating a podcast called “Bucket Talks,” which takes a deeper look into a student-athlete’s life on and off their respective playing fields, which soon became a two-for-one deal.

“It started as a threshold project for my master’s but then I decided to take it further especially with the pandemic,” Van Kleunen said. “I had a lot more time on my hands and I was like, ‘let me do something fun that I would have never done before.’ It was just a lot of fun, having conversations with former teammates and I’m going to continue to keep doing it.”

Since the first installment back in April, Van Kleunen has published four episodes with current and former Golden Eagles. These guests have included Natisha Hiedeman, Chloe Marotta, Nirel Lougbo and Izzy Spingola.

On the hardwood this season, Van Kleunen, this season, has not taken a step back. In addition, that confidence she was once learning is now being seen to its fullest.

“I still go back even right now just thinking of how far we’ve come,” Van Kleunen said. “I remember doing workouts on my deck outside my house — different interval stuff and defensive slides —  and the fact that how far I’ve come with that is awesome to see.”

Raterman said the biggest area of growth she has seen out of her forward this year has been her ability to use her versatility more and her ability to score in different ways.

“Last year, she had some scoring ability with her strengths that she always relied on and if teams figured out a way to maybe take away her half hook (shot) or kind of her finesse game in the post, she struggled to find the balance consistently to score in other ways,” Raterman said.

Following Marquette’s 68-43 win over Providence in the BIG EAST Tournament quarterfinals, Friars head coach Jim Crowley mentioned it is the energy that Van Kleunen brings that makes her a consistent worry to defend.

“She just plays with ridiculous effort,” Crowley said. “When she sees an early one go in it’s going to be a good day for her. She’s quick in her release on the perimeter to go along with that great after and she just did a really good job defensively as to disrupt our timing of our screens and our ability. She’s really skilled. I don’t want to sound like she’s not a very skilled player but effort is a skill, and to do it consistently as a high level skill and she has.

After the conclusion of the regular season, Van Kleunen earned several BIG EAST honors. She was named to the All-BIG EAST Second Team and won the BIG EAST Sportsmanship Award.

Through 25 games this season, LVK is averaging 13 points, 5.8 rebounds and two assists per game. In addition, she has scored in double figures in all but five games.

For Duffy, it is Van Kleunen’s consistency in both her work ethic and performance on the court come game day that she respects the most.

“Lauren is a blue collar worker every single day,” Duffy said. “That statistic of double figures, there’s a direct correlation of the way she works, the way she prepares, the way she keeps her mental side steady. I don’t have to worry about her and I know that there’s going to be a ton of opportunities for her to be successful when you prepare and you work like that.”
Embracing leadership roll
Being a fifth-year and the oldest player on the team brought Van Kleunen a new nickname heading into this season.

It is a nickname that she has embraced to its full extent, from taking players under her wing to creating relationships on and off the court.

Van Kleunen said she never anticipated her leadership role to be as big as it has become at the beginning of her MU career.

“You say you want to be a leader but you don’t really know (how) to be one or you’re trying to balance everything,” Van Kleunen said. “A big thing for me is, creating relationships off the court that will be extremely helpful on the court too. So just being there for my teammates in any way possible.”

Raterman said it is Van Kleunen’s love for MU and the program that has served as a catalyst for her leadership growth. She also said Van Kleunen has challenged herself to reach her teammates in different ways.

“In the last two years, she’s gotten better not getting frustrated and trying to learn. Everybody reacts differently to every situation and she wants this so bad. So when people react and it might not be with her same reaction, she seemed frustrated,” Raterman said. “Now it’s like, ‘how can I reach them? How can I talk to this person a little bit differently?’ That’s something she puts a lot of her shoulders with because she wants to be great and she truly cares.”

Sophomore forward Camryn Taylor said since she arrived at Marquette, Van Kleunen and her have had a close relationship.

“I (have) learned a lot from her and she always used to help me out in practice (last year) a lot too,” Taylor said. “But even now just listening to her. She’s been here for five years, she kind of really has a great grasp on what’s going on and stuff like that. So just learning from her is really good. We just have that good chemistry with each other.”

Karlen told the Marquette Wire in January that she has never seen a player with the IQ Van Kleunen has.

“She has been great, just in the sense of she’s always positive, she’s always working and I think we can relate to that a lot,” Karlen said. “So just a sense that she is consistently a great leader for us and she’s never negative is huge. It’s been great for me to pick her brain a little bit and add to my game through studying hers.”
Making an impact and building a future
Though Van Kleunen’s time in a Marquette jersey has not come to an end just yet, she has accomplished a lot both on and off the hardwood.

The Mason, Ohio, native said when it comes to off-the-court accomplishments, she is most proud of this past year with the movement on social injustice.

“I’ve seen sides of my teammates that I’ve never seen before, and just be vulnerable with one another,” Van Kleunen said. “I’ve dealt with things that I don’t think I would have ever dealt with. It’s been uncomfortable, it’s been hard but I think that’s what shows growth.”

LVK mentioned the march organized by MU student-athletes in September was big, as it allowed the entire athletic community to be themselves.

When it comes to on-the-court accomplishments, outside of the BIG EAST Championships and NCAA Tournament appearances, she is most proud of continuing to put the program on the national map.

There is a possibility that Van Kleunen returns for a sixth year, as the NCAA has granted an extra year of eligibility to all winter sport student-athletes because of COVID-19, but she hopes to be remembered one way when it is all said and done.

“Just that I gave it everything I had, that’s the biggest thing,” Van Kleunen said.