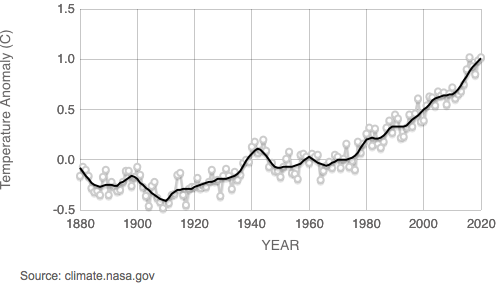 This chart shows recorded global temperatures since 1880. Graphic via NASA

Texas’ recent weather disaster illustrates that the United States is failing to address the climate crisis.

Texas, along with other neighboring states like Tennessee, Texas, Kentucky and Louisiana, was confronted with severe weather conditions typically not endured by the state. These severe weather conditions include deadly freezing winds, ice and snow. The extreme hard freeze led to an inadequate power grid and frequent power blackouts, leaving about four million Texans without heat or electricity for several days. Texans suffered the consequences of climate change, leaving 30 people dead, including a 75-year-old man whose oxygen tank lost power during the blackouts.

This happened because Texas, much like the U.S. as a whole, is not prepared to handle the climate crisis we are facing.

Climate change is the defining issue of our time and we are at a defining moment. From shifting weather patterns that threaten food production to rising sea levels that increase the risk of catastrophic flooding, the impacts of climate change are global in scope and unprecedented in scale.

The changes observed in Earth’s climate since the early 20th century are primarily driven by human activities, particularly the mass burning of fossil fuels like carbon dioxide that increase heat-trapping greenhouse gas levels in Earth’s atmosphere. This results in an increase in Earth’s average surface temperature, which has been on a steady incline since the 1960s, according to research collected by NASA.

The Texas power grid generates about half of its electricity by burning natural gas. This makes it well-equipped to handle the state’s warmer weather. But this speaks to a bigger issue: Texas’ infrastructure is not conducive to addressing the effects of dramatically changing temperatures.

Representative Alexandria Ocasio-Cortez of New York and Senator Edward J. Markey of Massachusetts introduced the Green New Deal, a congressional plan to tackle climate change, in 2017. The goal of the Green New Deal is to reduce greenhouse gas emissions in order to avoid climate change’s worst consequences while also trying to fix societal problems like economic inequality and racial injustice.

This type of initiative needs to be implemented more thoroughly in order to combat the climate crisis. Adopting the Green New Deal would also be helpful in preventing more power disasters across the nation.

Although Wisconsin experiences frequent cold temperatures during the winter season, the state is not necessarily in the clear.

According to the Wisconsin Initiative on Climate Change Impacts, historical trends and future projections reveal an emerging consensus on the range of possible climate changes that Wisconsin will experience. In particular, WICCI finds that Wisconsin is likely to become a much warmer state over the next few decades, with average temperatures more like those currently experienced in states hundreds of miles south.

Climate change is not just about the increasing global temperatures; It is also about irregular weather patterns.

Wisconsin is also likely to become wetter, with a modest increase in total precipitation and the number of intense rainfall events, according to WICCI. The impacts of climate change vary by season, with winter experiencing the greatest warming and most likely increase in precipitation.

The major effects of climate change happening in the South should encourage Wisconsinites to hold governmental officials responsible for ensuring that we are protected from our own battles with climate change in the future.

Clean Wisconsin, an environmental organization working to protect the state’s clean air, clean water and natural heritage, is encouraging utility companies and the state to look for renewable energy sources, like wind and solar, as well as existing technology, to help Wisconsin transition to 100% carbon-free electricity.

To achieve this, the organization works on a wide range of issues in a number of areas to protect our natural resources and the health of all Wisconsinites. Clean Wisconsin has also been partnering with the Milwaukee Metropolitan Sewerage District to promote education, outreach, policy and green infrastructure practices including rain barrels and rain gardens.

Though it may seem that disastrous climate change impacts are inevitable, there are various ways we can prevent it from getting worse. As mentioned previously, voting for government officials who have plans to address climate change is a great place to start. Even opening a dialogue and finding middle ground with those around you concerning this issue is a great way to bring awareness as well.

No matter how you choose to aid in the prevention of climate change, it is essential that we hold ourselves accountable for the future of our homes.

This story was written by Hope Moses. She can be reached at [email protected]