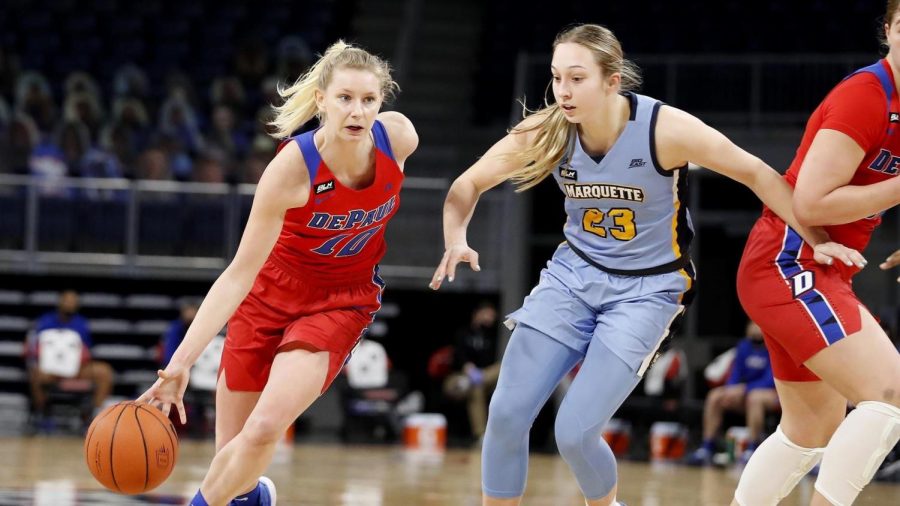 In a game with a lot on the line, the Marquette women’s basketball team rose to the occasion, defeating No. 24 DePaul 85-71 Wednesday afternoon. This was their biggest win of the season, courtesy of a huge second half performance.

Head coach Megan Duffy has the Golden Eagles playing their best basketball of the season. The team now has won five games in a row and officially clinched the No. 2 seed in next week’s BIG EAST Tournament at Mohegan Sun Arena in Connecticut.

Senior guard Selena Lott came up big for the Golden Eagles again, as she posted a game-high 25 points on 10-21 shooting to go along with six rebounds and four assists. Marquette’s leading scorer on the season had only five points at halftime, but that didn’t faze her as the senior poured in 20 points in the second half, with 13 coming in the third quarter alone.

With a game evened out with a big team performance by all, four Golden Eagle starters reached double-digit scoring. Sophomore forward Camryn Taylor secured 20 points from on an efficient 8-10 shooting and 11 rebounds, tallying in her third double-double of the season.

Redshirt senior forward Lauren Van Kleuen also made her presence known in the paint as she posted 16 points and eight rebounds for the Golden Eagles. Sophomore guard Jordan King rounded out the double-digit scoring with 13 points on 5-10 shooting to go along with six rebounds and four assists.

With Marquette struggling to shoot the ball from 3-point land (1-6 from the floor), the Golden Eagles dominated down low with 66 paint points, holding DePaul to just 33.

Marquette also dominated the rebounding battle, yet again, as the Golden Eagles out-rebounded the Blue Demons 50-27 throughout the afternoon. Winning the rebound battle has been a common theme for Duffy’s squad the last two seasons. MU has now won the rebounding battle for the 50th time in 53 games since Duffy took over the program at the beginning of last season.

Marquette jumped out to a quick 8-2 lead to start the game, but then saw a back and forth first half that ended 33-33. The second half was a different story however, as the Golden Eagles outscored the Blue Demons by seven in third quarter, shooting 68.8% from the field in the process, and led by as many as 16 points late in the fourth quarter.

Marquette shot 50% from the floor throughout the afternoon, which is the eighth time the Golden Eagles have done so this season, winning all eight of those games.

Junior guard Lexi Held led the way for DePaul with a team-high 23 points on 9-21 shooting for the Blue Demons. Junior guard counterpart Sonya Morris also posted 18 points to go along with five rebounds.

Marquette (17-4, 14-3 BIG EAST) now takes on No. 1 UConn next Monday for its BIG EAST regular play finale before the BIG EAST Tournament starts next week. The Golden Eagles come into the game with huge momentum after picking up their first ranked win of the season against DePaul. UConn defeated Marquette handily 87-58 on Feb. 5 the last time the two teams met in Milwaukee. That game is scheduled for tipoff at 7 p.m. Central Standard Time on CBS Sports Network.

This story was written by Sam Arco. He can be reached at sam.arco@marquette.edu or on Twitter @_sam_i_am119.