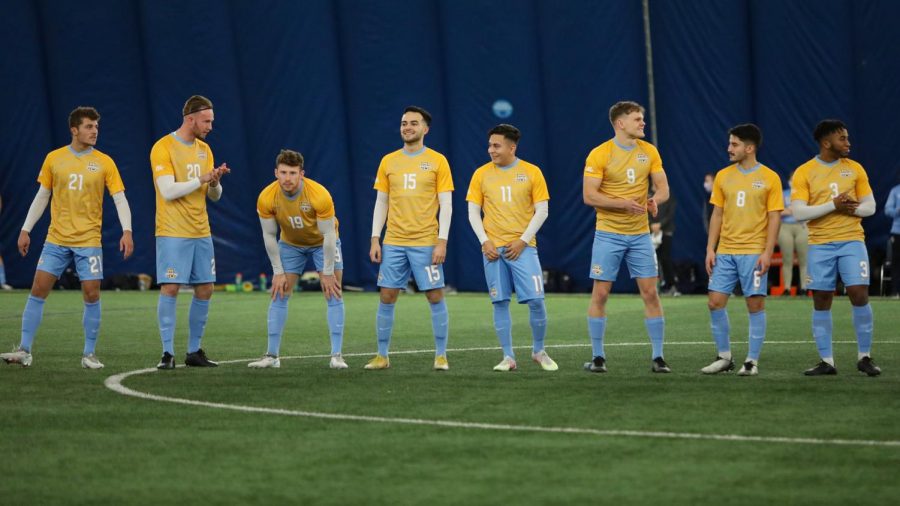 The Marquette men's soccer team lines up before their game against Loyola Chicago Feb. 3 (Photo courtesy of Marquette Athletics.)

The Marquette men’s soccer team has had a thrilling start to their season, winning their first three games 1-0 thanks to game-ending goals in overtime.

They also went into overtime for a fourth game in a row this Saturday, but fell 2-1 in their first BIG EAST contest to Creighton.

Despite not scoring any goals in regulation until junior forward Lukas Sunesson scored against Creighton Feb. 20, the defense has stepped up, starting the year with three clean sheets.

A key contributor to the hot start is redshirt sophomore goalkeeper Chandler Hallwood. From Halifax, England, Hallwood transferred to Marquette from Gannon University in Pennsylvania. He started in the team’s wins over Northern Illinois and St. Louis, and played all 100 minutes against the Billikens.

“Chandler has been able to handle crosses, handle the high ball and on the rare occasions where the defense has been beat, he’s managed to come up with big saves,” head coach Louis Bennett said.

Throughout all 100 minutes against St. Louis, Hallwood did not have to make a single save.

“I’m very proud of our three clean sheets in a row, but it’s really a credit to our team chemistry as a whole,” Hallwood said. “I’ve got a lot confidence in the rest of our defenders.”

Junior midfielder Zyan Andrade, who scored the game-winning goal against St. Louis, also credited the defense for putting them in a position to win.

“Everyone is working together on defense, not just on the back line but the whole team,” Andrade said. “We’re always just hungry to get the ball again, and more than 270 minutes without conceding a goal gives us a great chance to win.”

Andrade also said that the hunger they have on defense for getting the ball back will help them get more opportunities to score on offense.

“If you’re not conceding any goals, you are always going to have a chance to win, and when you’re hungry to get the ball back it will open up opportunities to score,” Andrade said.

Coming into this season, Bennett did not put any extra emphasis on defense, but said that it is a priority every year for a winning team.

“As long as our defense is in top form, you can’t lose a game,” Bennett said. “The reason we’re more successful this year is that we have more experience on the defensive end.”

The men’s soccer team have 11 newcomers on their roster and as their normal fall season switched to spring, many questions regarding how they would train and prepare with the safety protocols were up in the air.

Even with the uncertainties around this season due to COVID-19 and training being different than normal, Bennett said his defense is living up to the job’s expectations.

“I don’t think anyone is exceeding my expectations, they’re just all doing their job at a very high level,” Bennett said. “We have to make sure we don’t give good opportunities for shots. The less Chandler has to do, the better we’ll be.”

Bennett specifically mention that junior midfielder Alan Salmeron has stood out to him among a multitude of strong performances thus far defensively.

“Alan has been fantastic, sensational,” Bennett said. “He does a lot of the grunt work that you may not notice if you don’t know what goes into the job, but he’s done a great job.”

After falling to 3-1, Marquette now looks forward to Saturday February 27th when they will host nonconference opponent Western Illinois at Valley Fields.