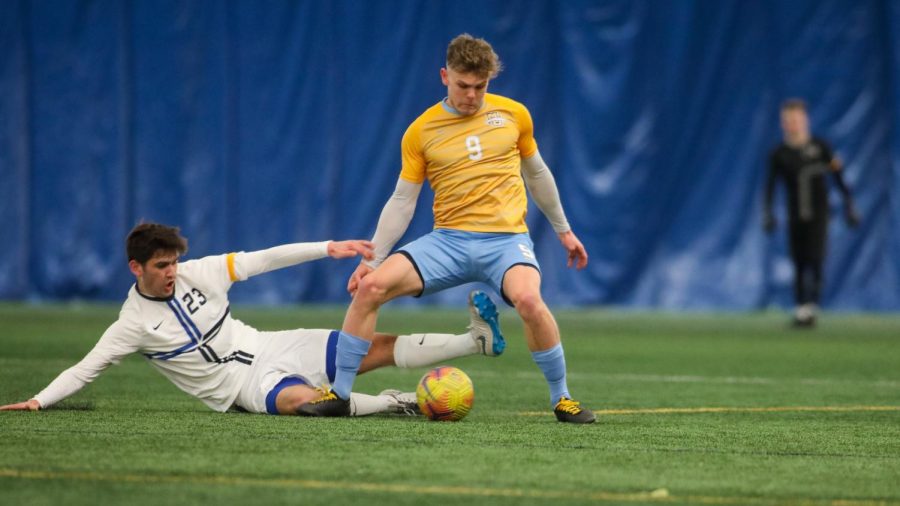 For the fourth time in as many games this season, the Marquette men’s soccer team headed to overtime, but this time the Golden Eagles’ magic ran out as the Creighton Bluejays scored in the final minutes to escape Valley Fields with a 2-1 victory Saturday afternoon.

Redshirt sophomore defender Jake Ronneberg scored the game-winning goal for the Bluejays off a corner kick set piece in the 105th minute of the game. It was the second time that the Bluejays had scored from a corner kick in the game, with the first goal coming from junior midfielder Charles Auguste in the 51st minute.

Marquette had gone over 300 minutes without allowing a goal to start the season until Auguste’s shot made it past reigning BIG EAST Goalkeeper of the Week Chandler Hallwood’s outstretched hand.

Despite giving up the two goals, Hallwood had a career-high seven saves in a Marquette uniform, which gives him a team-high 14 saves so far on the season.

Creighton’s goal to start the second half also marked the first time the Golden Eagles had trailed so far this season, but that did not last long, as junior forward Lukas Sunesson met sophomore forward Christian Marquez’ cross with a header that leveled things up in the 65th minute.

Sunesson’s second goal of the season had Marquette right back in the game, but the Golden Eagles would not be able to manage another chance, as the team only had four shots on goal on the day.

Despite playing in their first game of the year, Creighton seemed to be the more aggressive team, as they outshot the Golden Eagles 18-9 and committed 10 more fouls than Marquette.

Marquette (3-1, 0-1 BIG EAST) will now host Western Illinois (0-2-1, 0-2-1 Summit League) at Valley Fields next Saturday at 4 p.m. Central Standard Time, which will be the team’s last nonconference game before BIG EAST play is in full swing.