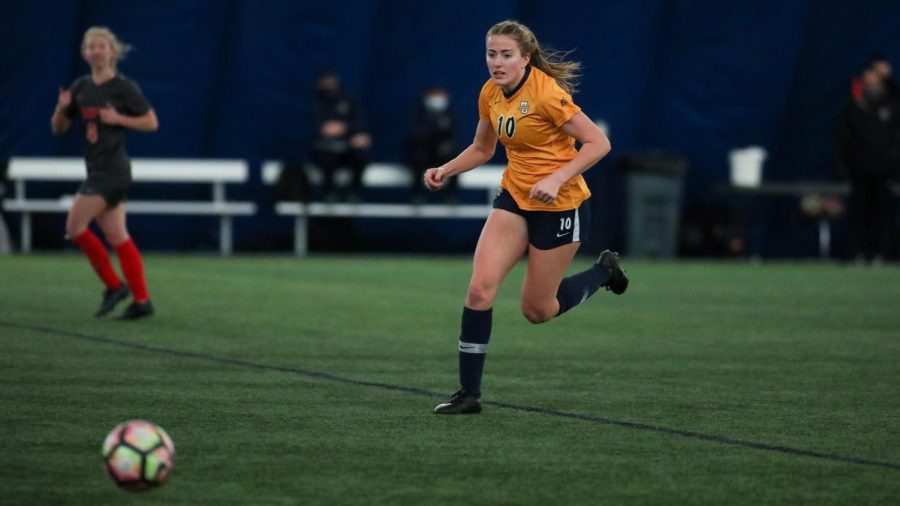 Many of the young Marquette women’s soccer members are getting their first glimpse of a collegiate season in a unique manner due to the pandemic.

Elsi Twombly, one of the first-years on the Golden Eagle squad, has started to get a feel for the games. The transition from high school to college has been difficult, but that was expected.

“It’s definitely very different because high school wasn’t as fast-paced or physical but it’s still really exciting and exactly what I expected,” Twombly said. “I really like it.”

Twombly, who went to Kimberly High School in Wisconsin, has had some help from her team to make changes. The juniors and seniors on Maquette’s roster have helped Twombly adjust, she said.

“They’ve helped a lot, especially with COVID and everything,” Twombly said. “They’ve been really supportive and understanding and helpful to all of us freshmen coming in because we don’t know much and are very clueless about a lot of things that are going on. They’ve been really helpful with that.”

Twombly has picked up three goals in three games so far. Her performance even drew attention from the conference, as she was selected as the BIG EAST Freshman of the Week, according to the BIG EAST website.

Twombly said she was happy that she could help her team pick up some wins to start the season.

“I was really happy. It was something I’m honored to receive,” Twombly said. “It’s always exciting because the work that our team has done and the goals that I’ve scored have paid off.”

Head coach Frank Pelaez said Twombly’s award was proof of the hard work the team puts in at practice.

“It’s exciting for her. For all the freshmen, they’re all really close and they’re all supporting each other really well,” Pelaez said. “She’s definitely a player that is strong and quick and has a nose for the goal. It’s just a process where we want her to get better every day and she’s working really hard at it.”

Twombly is both a midfielder and forward, a position combination she shares with several other members of her team. Twombly has been able to distribute from the midfield and chase the ball down at forward.

Twombly has also been able to use her physical traits to help her score goals.

“I think the two things are definitely my speed and size,” Twombly said. “In the last game, I was able to run past a few defenders and then body them off the ball because of my size and physical abilities.”

Two of the three goals Twombly scored proved to be big for the Golden Eagles, as they fended off Illinois State and Loyola Chicago by just one score in each.

Marquette has been able to get goals in every game and has avoided any overtime games so far. Goals from several other Golden Eagles in the games have given Marquette a 3-0 record with just under a month until BIG EAST play.

“Overall, I think we scored nine goals so far and maybe four or five different people doing it,” Pelaez said. “That is really important to me that it is spread out.”

The team aspect has proven to be a central focus for the Golden Eagles. Twombly talked about how the awards were exciting but the team always comes first.

In high school, Twombly was certainly able to secure awards, even being named the Post Crescent’s Girls’ Soccer Player of the Year in Wisconsin, one of the most prestigious awards in Wisconsin. She also was named first-team all-conference and first-team Wisconsin Soccer Coaches Association all-state in her junior year.

Twombly was one of the many players to have a senior season canceled. So far, she said she is enjoying being back on the pitch.

“It’s the best feeling,” Twombly said. “I waited so long and now every second out there is the greatest thing ever because we didn’t have it for so long.”