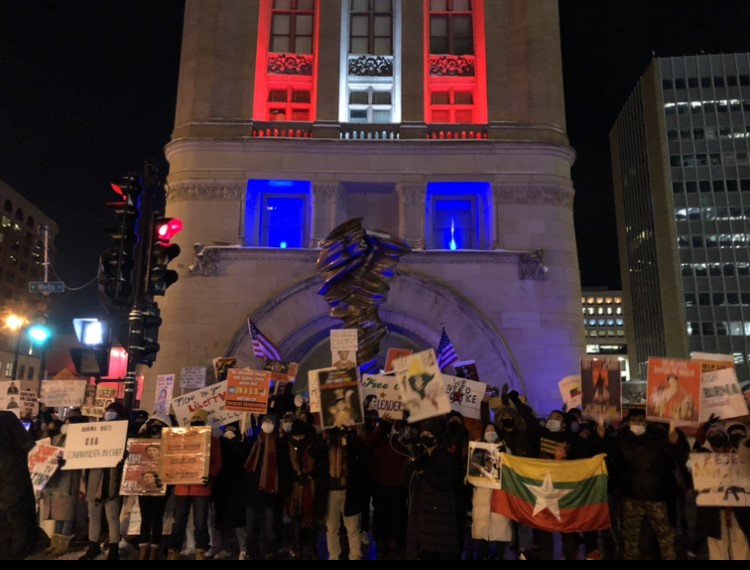 Many protesters were outside of the Pabst Theater, where Biden had his townhall.

In his first town hall since becoming president, President Joe Biden spoke at the Pabst Theater in Milwaukee Feb. 16, where he addressed topics ranging from vaccine distribution to schools reopenings.

Biden said that every American will be eligible for the vaccine by the end of this July.

“By the end of July we’ll have over 600 million doses, enough to vaccinate every single American,” Biden said.

According to Wisconsin Department of Health Services, Wisconsin has administered a total of 1.18 million COVID-19 vaccines, ranking the state 15th in the nation for the amount of vaccines administered of those distributed to them.

Biden also said that he is hopeful, however still uncertain whether things will return back to normal by next Christmas.

“I don’t want to over-promise anything here,” Biden said. “I told you when I ran and when I got elected: I will always level with you.”

Robert Miller, chair of the Marquette Democrats and a sophomore in the College of Arts & Sciences, said he admired Biden’s transparency during the town hall.

“His honesty is admirable,” Miller said. “He mentioned not to predict things you don’t know for certain, a drastic change in tone from the previous administration.”

However, Philip Anderson, co-chair of the Marquette Republicans and a senior in the College of Arts & Sciences, said Biden’s timeline surrounding COVID-19 is vague.

“Biden provided no information as to when or how this would be done,” Anderson said. “He said he ‘hoped’ that by ‘Christmas’ or ‘next year,’ that the mask restrictions and social distancing requirements would be significantly different. I can understand the hesitancy for giving an exact timeline of events but how about some objective standards?”

Bryanna Spietz, a first-year in the College of Arts & Sciences and member of the Marquette Democrats, also expressed concern regarding the timeline Biden provided for vaccinations and school reopenings.

“He stated that vaccines for COVID-19 will be ready for everyone who wants one by the end of July, and that grades K-8 will be back in school within his first 100 days.” Spietz said. “Although I want these things to happen, I do doubt how accurate this timeline will be.”

According to the Center for Disease Control and Prevention, only 13% of the US population is vaccinated with the first dose of the COVID-19 vaccine, meaning only half of the population will recieve the first dose by August if the current rate of administration persists.

Despite Spietz’s concerns over Biden’s proposed timeline, she said she admired the president’s demeanor at the town hall.

“The thing that stood out most to me was the personalization that Biden conveyed,” Spietz said. “He addressed almost every speaker directly and either thanked them or asked more about their background. Personally, I found this really refreshing to see, as the last four years lacked these connections with ordinary people.”

When asked about the status of schools reopening, Biden said the majority of K-8 schools will be in-person five days a week by the end of his first 100 days in office, meaning this transition should take place in May.

However, Biden said that this transition will be a slower process among high school and college students due to studies showing higher contagion rates amid this demographic.

In order to ramp up vaccine production, as well as provide additional aid to small businesses, states and local governments, Biden also proposed his $1.9 trillion plan at the town hall, which is called the “American Rescue Plan.”

The 1.9 trillion plan aims to “facilitate the United States recovery from the devastating economic and health effects of the COVID-19 pandemic.”

However, Anderson said that there are more effective alternatives to stimulate the economy than Biden’s plan.

“Biden seems unwilling to work across the aisle to minimize the astronomical price tag,” Anderson said. “Even slight reopenings would have tremendous effects on unemployment and the economy that has been shown feasible in the state of Florida.”

Although immediate reopenings may not be feasible, Anderson said it is important to provide a concrete plan for the American people.

“In sum, Americans want our schools back, our jobs back and our lives back,” Anderson said. “If not right now, we want objective measures we must meet to get there.”

However, Miller said he appreciated the way Biden is handling COVID-19.

“He is not downplaying the severity of the virus, but rather sharing the information that he was given by experts in the field studying viruses.” Miller said. “I am pleased with the initiatives brought forth by President Biden.”

This story was written by Claire Driscol. She can be reached at [email protected]