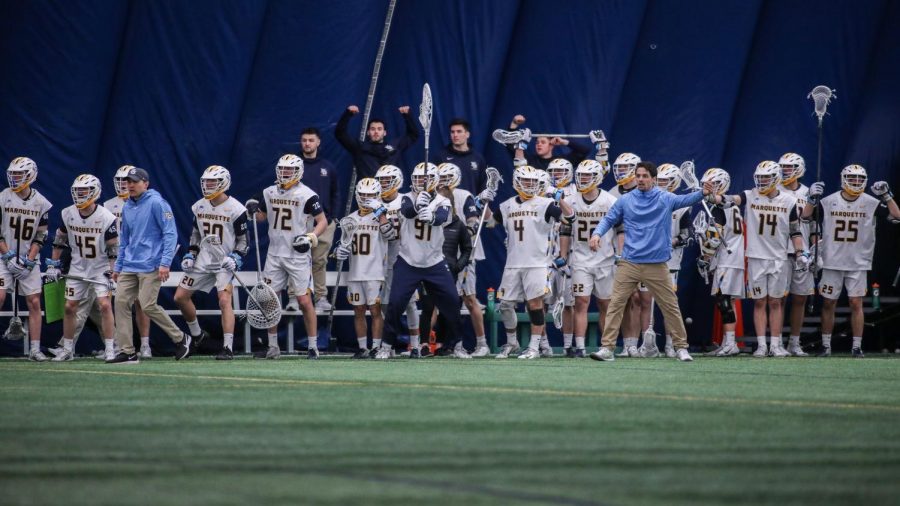 “It has come to the attention of multiple organizations that we have had yet another student of our Marquette community exhibit racist behavior,” the Instagram post said.

The next morning, Marquette University said it was notified of the video with two current students using racist language that was posted to social media.

“The Division of Student Affairs immediately initiated a student conduct investigation, the results of which will be confidential due to FERPA privacy law,” university spokesperson Kevin Conway said in a statement Feb. 16.

The university said that one of the individuals in the video was a student-athlete, who was removed from the team Tuesday morning. After the names of the students in the video circulated online, an athlete from the men’s lacrosse team was taken off the roster.

The university said they will not be sharing the identity of the other student involved.

“As a Catholic, Jesuit institution, we are called to build a nurturing, inclusive community where all people feel safe, supported, welcomed and celebrated. Racism and discrimination have no place on our campus,” the university statement said. “To our students of color, we pledge to continue to work with you to overcome injustice and make our university anti-racist.”

Lonny Clay, a member of Black Student Council and a sophomore in the College of Arts & Sciences, said the video is nothing new to Black students on campus.

In June, a women’s lacrosse commit’s offer was rescinded after she posted offensive comments related to the death of George Floyd on Snapchat. In August, University President Lovell’s son withdrew from the university after he had been posting racist and sexist remarks on social media. In May 2018, an image with disturbing racial overtones circulated around campus, that showed a group of students holding fake guns to a Black doll.

Yasmeen Atta, a senior in the College of Nursing, said she first saw the video Monday evening, having to watch it more than once to hear what the students in the video said.

She said she was disgusted.

“It is not enough to simply remove a student from a team … these students should be removed from the university, they should not be on Marquette’s campus,” Atta said. “The fact that they would be allowed to still be a a part of the Marquette community, still be a part of classes with students of color who are threatened by these remarks is, to say the least, pathetic.”

As of Feb. 22, there are no public consequence transparent to the campus community regarding the students in the video.

Atta said the university has only provided kind words instead of action, in which she said does not show true anti-racist behavior.

“If you don’t listen to someone who is telling you that someone who has experienced racism and they would like (things) to change. You are not even close to becoming an anti-racist institution,” Atta said. “These are valid concerns … we are the ones who are attending this university and … go to classes with these very students who are expressing these remarks.”

A statement from Men’s Lacrosse Head Coach Andrew Stimmel was posted on Marquette Lacrosse’s Twitter Feb 17. Stimmel said that he was saddened that members of the University community, including members of his own team, suffered because of the hateful words because of the former lacrosse player.

“Let there be no doubt, racism and intolerance have no place in our program,” the statement read. “Our coaches and student-athletes are committed to continued progress on social justice issues and our resolve has never been stronger.”

Zoe Comerford contributed to this report.