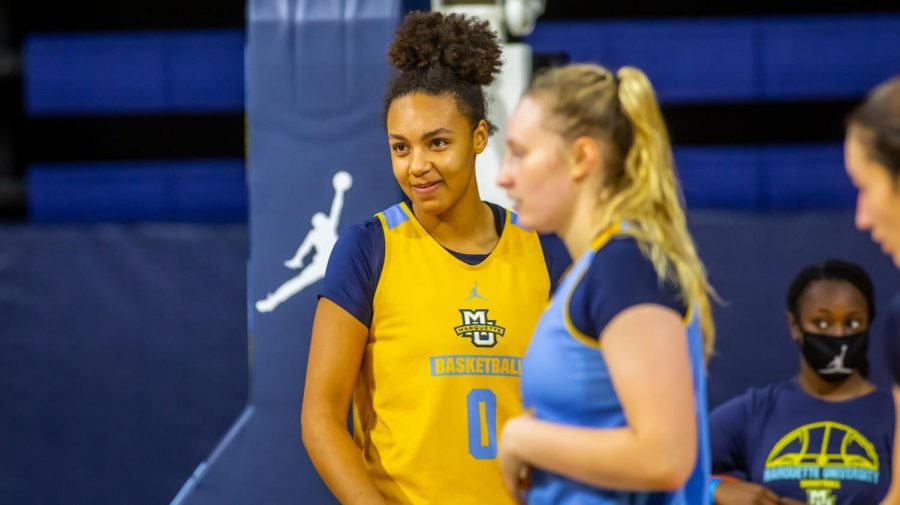 Many factors have an influence on the decision to continue an athletic career in college, one of which may be location.

Some people may want to stay close to home, so they decide to pick a college not too far away. Others may want to have a little more distance, but not too much, so they may come from neighboring states. Others may decide they want to move across the country. But for one first-year player on the Marquette women’s basketball team, her trip to campus required crossing the Atlantic Ocean.

Julianna Okosun first came to Milwaukee last summer from her hometown of Copenhagen, Denmark after she felt like the move would be the most beneficial for her career.

“There (are) huge differences that I have to get used to,” Okosun said. “A lot of it is cultural, over here (in the United States), basketball is much bigger and taken much more seriously. That also shows the coaches care a lot more, but they expect a lot more too. Back home our coaches had jobs on the side, and they weren’t fully invested in us as players and as a team.”

As she has been adjusting to college basketball in America, head coach Megan Duffy has high expectations for Okosun and her underclassmen teammates.

“Our sophomore class is huge, along with our freshmen as well,” Duffy said. “We’re still underclassmen, we got 10 kids that are going to be huge parts of our program.”

Okosun attended Frederiksburg Gymnasium and HF-Kursus educational institutions while she was in Denmark. During that time she was a part of the national team squads, as high school programs and teams were not an option.

“Sports were not integrated into school, you had to play for a, more or less, professional team to be able to play,” Okosun said.

During what would have been considered her high school years, she was a member of the Denmark U16, U18 and junior national teams. In those years, she played in the U18 European Championships and was named to the Denmark Senior Women’s National Team. These achievements alone were some of the many reasons why Marquette was interested in adding the No. 28 ranked international first-year on World Exposure Report to their roster.

Okosun made her way out to the Midwest and visited campus with her father prior to committing, which helped her feel more comfortable about coming over to the U.S. to continue building her basketball resume. However, due to major time changes and a long flight over, Okosun did not remember much from that initial visit.

“I did take an official visit. I don’t remember a lot of it because I was super jetlagged — me and my dad were so tired,” Okosun said. “They wanted to show us all the great stuff, which the schedule was packed with. I did speak to a lot of coaches and research online, but you really have no idea until you actually visit.”

In addition to her visit to Wisconsin, the 6-foot-4 forward toured the University of Arizona, where she figured out quickly that it was not the destination for her.

“It was way too hot,” Okosun said. “I am from a Scandinavian country; We like that middle temperature where you can still have a jacket on. It was way too big. I just didn’t feel like I would fit in there. It just seemed very big and I would get lost easily.”

Besides the heat index, Okosun was also introduced to the game of football on her campus tour.

“They took me to a football game, and I had never seen a football game and there was fireworks and cheerleaders, I was so taken back by it,” Okosun said.

Now in a Marquette uniform, Okosun made her first collegiate appearance Nov. 29 against North Dakota. Since then, she has been able to put up four points, seven rebounds and four assists in the other eight games she has appeared in.

“To become a player that can really help the team on the court is a huge thing,” Okosun said. “The biggest reason I am here is to play basketball. Of course I want to be in school, that’s really important to me, (but) the basketball side of it is the reason I am in the States.”

Duffy said she looks to give Okosun, as well as the younger players, as many opportunities as she can.

“One of the things we have prided ourselves on is having a balanced attack,” Duffy said. “The more kids we can get in (like Okosun) … and get (them) confidence to score the basketball and get some really valuable minutes will help our team down the road.”

Although Okosun is dedicated to the sport of basketball, she struggles with being over 4,000 miles away from her family.

“I try to talk to them every day, because of the time difference it is very hard,” Okosun said. “I have to speak to them before 3 p.m. otherwise they will be asleep, but usually from the morning to afternoon times I am very busy with classes and practice. I try to talk to them though, even if it is for five or 10 minutes. They miss me, I miss them.”