Marquette pulls out gutsy win thanks to big night from Lott 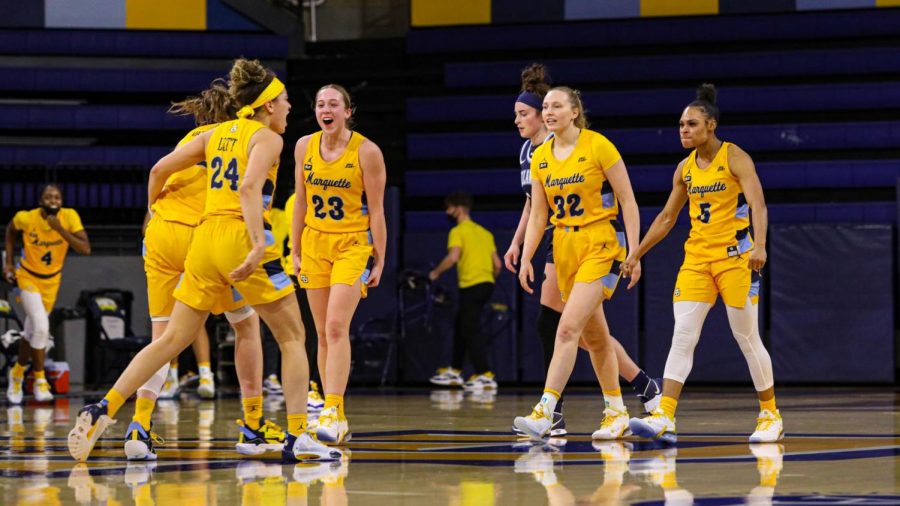 Marquette women's basketball celebrates during their 65-57 win over Villanova on Feb. 19 2021. (Photo courtesy of Marquette Athletics.)

The Golden Eagles, like all MU teams this weekend, wore gold jerseys, headbands and laces to honor Volleyball senior Sarah Rose, who is battling Ewing Sarcoma.

“We are so thrilled to be just a small part of this week with wearing gold and hashtag Gold4Sarah, just obviously a special human being and student athlete in our family going through a heck of a fight and battle right now,” Duffy said. “We talked about it with our team before the game of when we feel a little tired or  just maybe don’t have anything left in the tank let’s look down at our gold shoe strings and look over at the sidelines because for for a young woman, 21-years-old, to be fighting this is incredible.”

Senior guard Selena Lott said playing for Rose meant a lot, the team sent Rose a video after the game.

“I just think Marquette as a whole, like athletics, we all love each other,” Lott said. “I know it meant a lot for her for us to get the win so we’re doing it for her. We actually did a video for her and said we love you so much and this one was for you.”

On the court, the team earned a regular season sweep against the Wildcats thanks to three-double digit scorers, dominant presence inside the paint and outscoring VU 18-12 in the fourth quarter.

“Very happy with just the overall effort coming down the stretch,” Duffy said. “We knew this was going to be, after beating them at their place, a really difficult Friday night matchup for us and a lot of talent on the floor for them. Was really great to see just the grind and the grit for 40 minutes tonight.”

Despite a poor and slow performance by MU to open the game, the Golden Eagles held VU scoreless over the final 2:19 of the first quarter to squeezed out with a one point lead, 16-15.

The Golden Eagles’ defense came alive in the second quarter as they held the Wildcats to shoot 20% from the field and score seven points in the frame.

MU put together a 9-2 run over the final 5:24 of the half and headed into halftime with a 29-22 lead. Lott and redshirt senior forward Lauren Van Kleunen combined for 17 of MU’s 29 first half points.

The Wildcats came out with demand in the third quarter, opening the frame on a 21-15 run, forcing Duffy to call a timeout with 3:19 left in the frame after VU senior forward Brianna Herlihy hit a three-pointer to bring the game within one.

Despite only receiving three points from Lott after the timeout, which all came from the free-throw line, and ending the quarter on a 2:18 scoring drought MU headed into the fourth with a 47-45 lead.

“We had a couple of little breakdowns and they’re very capable of scoring in the 20s every quarter,” Duffy said. “But I could see the look in our players eyes and (in) the timeouts they weren’t going to be defeated off the bank three and we just kept encouraging each other and I was really thrilled about just our bounce back on their run to just kind of keep it close and not get it out of hand.”

Marquette went back to its bread and butter — driving to the basket, scoring inside the paint and drawing fouls — over the final 10 minutes to pull out their 15th win of the season.

“It was just a team effort,” Lott said. “Coach Duffy was trying for us to just keep saying for 40 minutes, it’s gonna take a lot, one minute at a time. So we all did it and it paid off.”

“I loved her aggressiveness, tenacity,” Duffy said. “Just drive it and get other people’s shots and her ability to attack mismatches (which) I  thought was great while she’s guarding Siegrist for 30 some minutes of the game. That’s the most impressive part with her. ”

For the Wildcats, Herlihy led the way with 19 points, shooting 8-for-17 from the field, while adding six rebounds, five assists and a steal. Siegrist finished in double figures as well with 18 points, 11 rebounds, a block and an assist.

Currently Marquette (15-4, 12-3 BIG EAST) has three more games — Creighton, DePaul and UCONN — scheduled to finish out the regular season and sit in a top three seed, something that Lott mentioned the Golden Eagles have the mindset of holding onto down the stretch.

Meanwhile, for Duffy, the Golden Eagles’ next game, Monday vs Creighton at 7 p.m. CST back at the Al McGuire Center, is their next biggest game.

“The big thing for us is to stay healthy, take it one game at a time and I think we were really excited to get this this this one tonight and then knowing the biggest game of the years Creighton on Monday,” Duffy said. “We’re going to have to have that mentality. For me, we’re very driven and focused on the task at hand and it was a great start for our four games remaining and our three.”