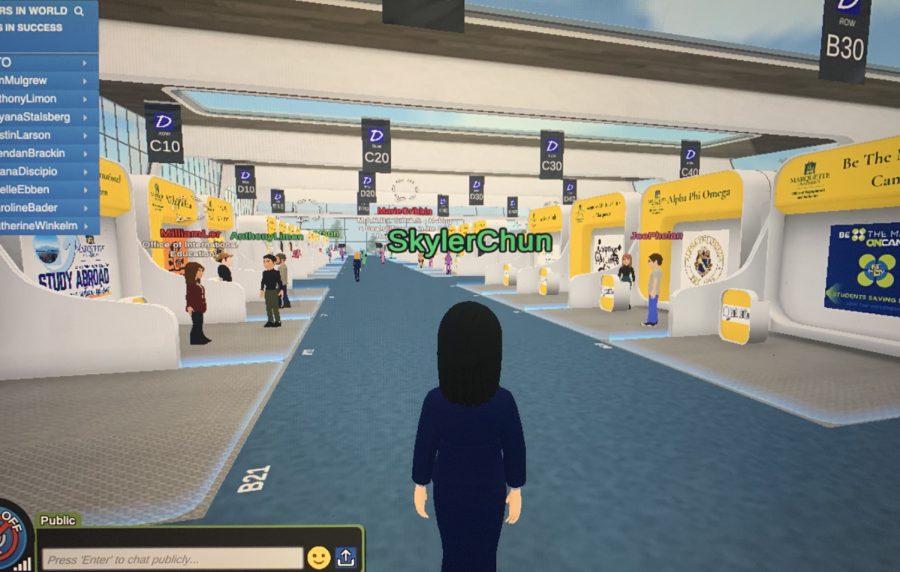 O-fest, or “organization fest,” is a way for students to get connected on campus and explore a variety of clubs that Marquette has to offer. But due to social distancing guidelines, this year’s event was held on a virtual platform with Degy World Feb. 16.

Degy World is an immersive virtual reality platform that allows participants to create their own avatars and talk to others nearby through voice or text chats.

Sean Francis de Asis, a first-year student in the College of Engineering, said he was a little skeptical about joining the online platform, but it turned out to be more social than he had expected.

“It actually felt really nostalgic, like playing a really old computer game, and the voice chat was really fun because you could talk with friends,” Francis de Asis said.

He said he actually felt that participating in Degy World was much easier than going around places in real life.

“I was able to go from a dance club to a stand up comedy club in just a couple seconds,” he said. “It was fun to navigate. It was like walking through a campus.”

“People would just reach out and talk to you virtually, which was really nice,” he said.

Anthony Limon, a first-year student in the College of Engineering, said he joined the virtual O-fest hoping to connect with people who share similar interests as himself.

“Because of COVID-19 and everything, I haven’t been very involved on campus,” Limon said. “I’m trying to see if I can push myself to do the things that I wouldn’t usually do.”

While he originally attended O-fest looking for organizations related to physics or math, Limon said he also found a lot of new clubs that he had never heard of before, such as a dancing club and a book club.

“I think I got about five groups to email me, and I will probably join the Big Brother, Big Sister one too,” he said. Big Brothers Big Sisters is a networking organization that pairs adult volunteers with children to build stronger relationships throughout the community.

After talking to leaders from various organizations, Limon said he and a friend decided to explore Degy World more.

“We were able to jump to and from different locations pretty quickly. There were a bunch of mini-games to play and it was really cool,” he said. “It was also really easy to navigate.”

He said there were mazes, soccer games, a concert stage and a bunch of other entertainment venues online. Limon said he and his friend even got to drive boats.

“We went exploring quite a bit, but it was a lot of fun,” Limon said.

Coner McFarlin, a senior in the College of Engineering, helped to run the Studio 013 Refugees booth at O-fest.

McFarlin agreed that the Degy World platform worked well, but it took him awhile to figure out how things worked at first.

“I liked the platform but it ended up being pretty ineffective in terms of actually engaging people to check out our club or come to events,” McFarlin said in an email. “Being virtual it made it a lot easier for people to ignore us.”

He said it also seemed like there were not many students who were actually looking for new organizations to join.

“People get intimidated by the idea of doing improv, so normally at in person O-fests, being able to talk to them face to face and make more of a connection helps us get more engagement, which is something we didn’t have with this,” McFarlin said in an email.

Students who missed the opportunity to attend O-fest this past week can find a full list of clubs at Marquette with ways to get involved online.