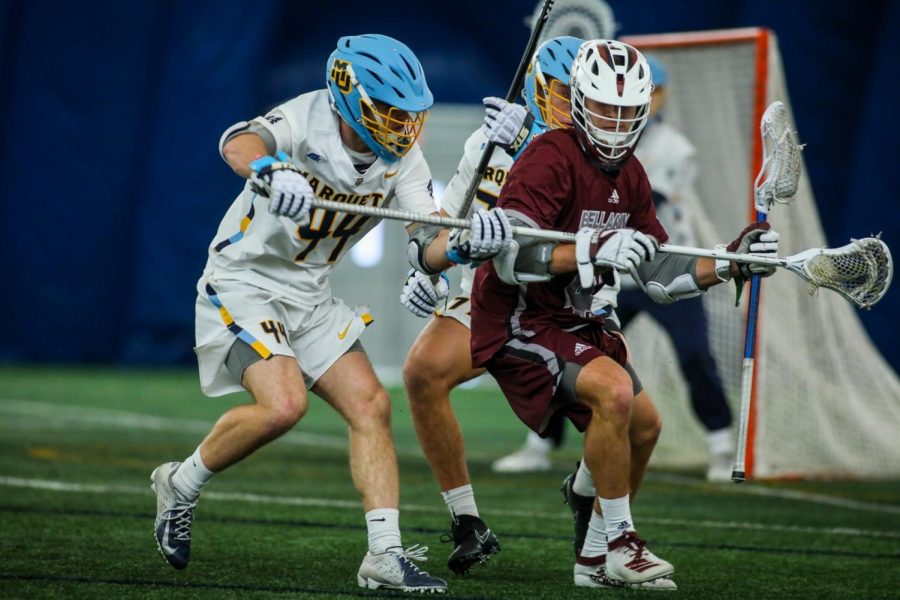 Defenseman P.J. Cox fights for the ball in a game last season against Bellarmine University (Photo courtesy of Marquette Athletics.)

After playing their last game March 11, 2020, the Marquette men’s lacrosse team has anxiously been awaiting the start of their 2021 campaign. Over 345 days later, the time finally came.

The squad was slated to begin their season Feb. 13 against Cleveland State University, but the game was canceled due to COVID-19 related issues within the Cleveland State program. With that, the Golden Eagles jumped right into BIG EAST play for their season-opener in a matchup against the 2-2 Denver Pioneers Feb. 20, who had already had four games under their belt.

Marquette head coach Andrew Stimmel said it would have been nice to have had a game or two before conference play, but the team and coaching staff was still well-prepared for game action.

“We kind of just go into every week understanding that there are going to be plenty of moments where we have to adjust and adapt and we have to find the silver lining in everything,” Stimmel said. “If you get a game canceled, it’s certainly heartbreaking for a few moments, but we felt great last week when we were able to deliver that news to our team and saw the response. … They took it hard for a minute or two and then we were able to go out and have a great practice.”

Despite COVID-19 having made its mark on the offseason and early in the regular season, the team enters this spring with plenty of experience on the roster and a plethora of young talent.
ATTACKERS:
The team features 12 upperclassmen and four graduate students, with all but one returning from last season. The one new addition, attacker Morgan Macko, is a graduate student who played the last four seasons at Bellarmine University. During his time with the Knights, Macko posted 61 goals and 33 assists in 45 career games.

“It’s nice having guys like Morgan Macko come in,” Fleming said. “It’s nice to have him come in with a ton of experience … and sort of help me out and help some of the other upperclassmen out to sort of get them comfortable and feel as confident as they can feel in these big games.”

Fleming also said getting players more comfortable and confident in their roles is one of the goals the attack unit has for this spring. He also hopes they can be one of the highest-scoring units in the country.

“Obviously we want to be a top 10 offense in the country,” Fleming said. “I think it’s something that we believe, and the coaches believe, is achievable. From there comes success as a team, so hopefully that’s what comes.”
DEFENSE:
While the attacking unit has its fair share of seasoned veterans, the defensive unit is much younger. Nine out of 10 defensemen on this year’s team are underclassmen, aside from graduate student P.J. Cox, who is returning for his fifth season with the Golden Eagles. Cox has played in 26 games dating back to 2017 and started in all seven of Marquette’s games last season. In those seven games, he tallied five ground balls and caused two turnovers.

As the oldest player on defense, Cox said it is important to be willing to offer time and help to the younger players on the defensive side since he remembers what it feels like to be in their shoes.

“There’s certainly a big learning curve coming from the high school to college level,” Cox said. “I’m in a position right now where I can kind of be like another coach and just kind of … support guys and help them feel as confident as they can so that they feel comfortable and able to make plays.”

Coming into this season, Cox said this defensive group has a sense of togetherness they were able to build towards the end of last season before the pandemic ended the season early.

“As the games went on last year we felt a lot more cohesive as a unit,” Cox said. “I think that that’s gonna free us up to make maybe even more plays than we were able to do last year just cause we know each other better, we really have an understanding of what certain guys are good at and when we as a unit we might need to support other players.”

In the seven games played last season, the defense allowed 74 goals and opponents had a shot percentage of 29% against the Golden Eagles. MU also caused the most turnovers per game in the BIG EAST, averaging nearly nine.
GOALIES:
Marquette has a lot of depth in goal with the additions of first-years Jamie Grant and Michael Allieri. The newcomers join redshirt first-year Sean Richard, redshirt junior Gabe Stein and redshirt junior John Hulsman, who made a team-high of 50 saves last season.
MIDFIELDERS:
The midfield brigade is led by graduate student Peter Henkhaus, who enters his fifth season with 34 career goals in 41 games played. He tallied 11 points last season after his best season as a Golden Eagle in 2017, where the 5-foot-9 midfielder posted 21 points and started in 12 of 13 games played.

Redshirt first-year midfielder Chris Kirschner will also look to build on an impressive first season after leading the team in both goals and points. The Flemington, New Jersey native posted 16 goals and 20 points as a true first-year and was the first player in program history with at least two goals in each of his first five collegiate games.

In addition to the returning talent, the roster features 15 incoming first-year players. Stimmel said the veterans on the team are gracious with their time and are always willing to help the younger guys improve their game.

“Our upperclassmen … have always done a great job of really recognizing … a young, talented player and really not having an ego and I think just finding a way to utilize them and help them make the team better,” Stimmel said. “They kind of have the experience, they understand the system, they understand what we’re trying to do as a program and I think to be intentional with those relationships, it’s really incredible to see because I think a lot of people maybe wouldn’t do that.”

In a season where there are still so many questions because of the pandemic, Stimmel’s message to guide the squad to success is simple: Keep showing up.

“We’ve been inspired by that, not only from a mental health initiative, but I just love the message,” Stimmel said. “So that’s kind of what we’ve discussed. Let’s continue to show up every day to get better. … So I think if we’re able to do that, it’s gonna lead to success. It’s not the end result, but that mentality is gonna lead to success down the line for us.”