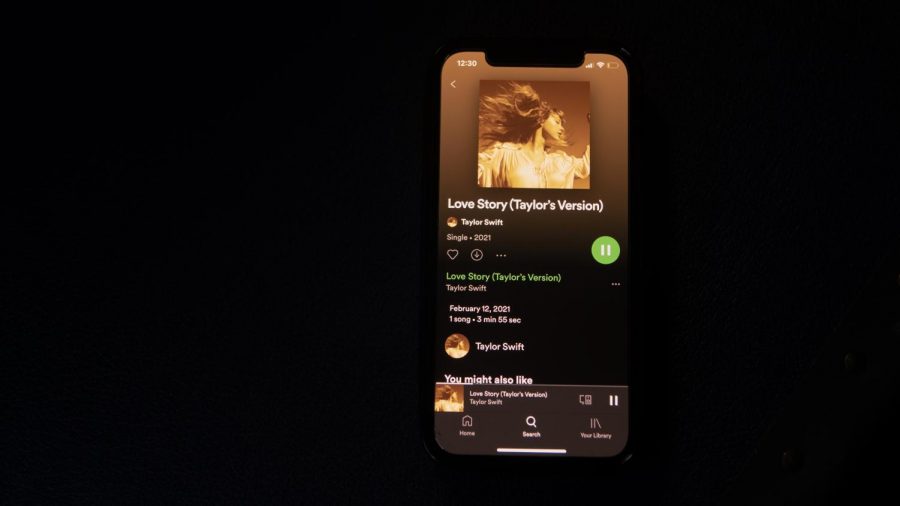 "Love Story (Taylor's Version)" was released on Feb. 12 to all platforms.

When most artists announce an album release, it is of completely new content and something the fans have not heard yet. However, that is not the case for Taylor Swift.

After a whirlwind year of recording and surprising fans by releasing two albums. Swift announced she would be releasing her own version and re-recording of her 2008 album “Fearless.” It is said to be released in April and is titled “Fearless (Taylor’s Version).” Though it is mostly songs many fans and non-fans alike have heard with hits like “You Belong With Me” and “Love Story,” she will also be releasing six unheard songs from “the vault.”

Big Machine Records, a record label, signed Taylor Swift in 2004 where she recorded six albums and spent 14 years of her life. Once her contract had ended in 2018, she signed with Republic Records and Universal Music Group. The drama ensued after Big Machine Records sold, which also included the selling of Swift’s masters, which included all the songs she wrote with Big Machine Records. Swift claimed she asked for a chance to obtain and own her own work, but she said Big Machine only offered her the chance to earn her albums back after each new one she recorded with them. She turned it down and instead, in November of 2020, was able to begin re-recording her albums one through five that she had recorded with Big Machine.

On Feb. 12, Swift released the first single for the album which was a re-recording of “Love Story” titled “Love Story (Taylor’s Version).” The intro, on first hearing it, brings back a youthful feeling, similar to that of dancing in a childhood bedroom with J-14 posters of 2008 bands hanging on the wall. It’s familiar yet sounds slightly different. The country twang, though still present, sounds a bit quieter, with a  bit more emphasis on the percussion. When Swift sings her first line, “We were both young when I first saw you / I close my eyes and the flashbacks start / I’m standing there,” the recognizable tune brings a sense of awareness to thirteen years ago. However, the difference in her voice is somewhat noticeable. She sounds older, yet the vision of an 18-year-old girl is still present. The new release sounds similar to the original, but her voice sounds more powerful and mature.

When announcing “Fearless (Taylor’s Version),” she also gave a sneak peak of the cover in an Instagram post. She even had a hidden message in her post spelling out APRIL NINTH. This indicated to some fans that the release was to be on that day. Fans also took it further and pointed out differences in her new cover, though it still has the similar golden hue to “Fearless.” They pointed out that Swift is wearing a silk long-sleeve, which is similar to the one worn by “Romeo” in her original “Love Story” music video. This led to the belief that Swift is saying she is now “her own knight in shining armor.”

Swift’s album will not only bring about excitement for new, unheard songs, but a feeling of nostalgia for her fans and even for those who aren’t.