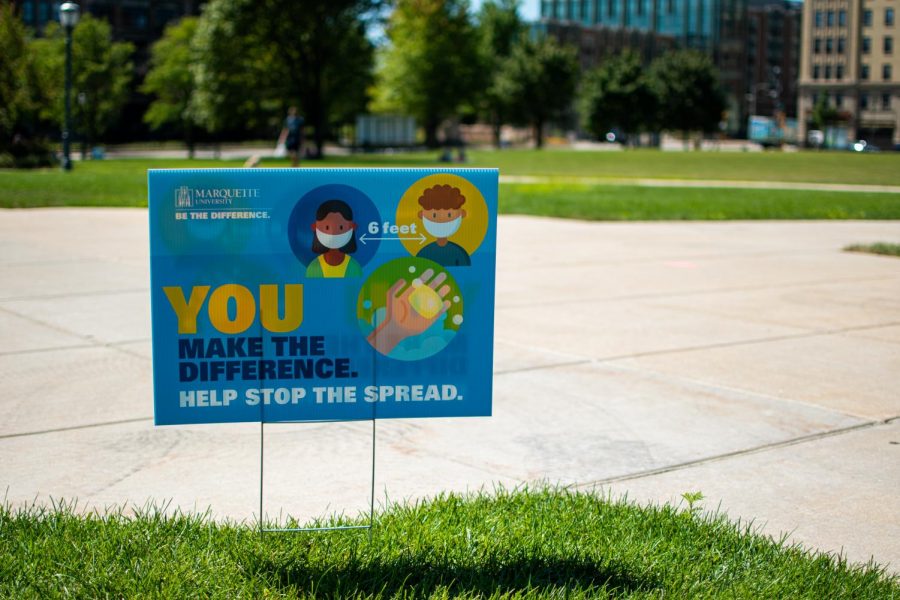 “It’s very important and I understand why they did (the mask mandate,)” Allison Mazukelli , a first-year in the College of Health Sciences, said. “It’s important to keep people healthy and enforce (mask wearing).”

Amber Wichowsky, associate professor of political science at Marquette, said there are “three sets of policies” that can be used to approach COVID-19. The first being personal behavior. Mask-wearing and people socially distancing themselves from one another would fall under this category

While the expectation to help others is important, not everyone thinks relying on others is enough.

The second set of policies Wichowsky says are “policies in terms of providing care for our students.”

With the outbreak of COVID-19, Marquette has changed its more traditional plans. One of the most noticeable of these changes is the removal of spring break. In its place, designated mental health days have been added.

“I do think Marquette, it’s recognizing the public health challenges. (They have) found a way to try to address them with these mental health days,” Wichowsky said.

While the implementation of these days is intended to prevent COVID-19 to spread and give students rest, some disagree with Marquette’s approach.

“I think that they’re nice, but I’d prefer spring break because I still worry about school and homework,” Mazukelli said.

Samantha DeLeon, a first-year in the College of Education, said she does not feel like she is getting a break.

“I can’t go five months without a break from school. It’s going to burn me out,” she said.

Even Wichowsky said despite the school’s best intentions, the mental health days are “insufficient.”

The last policy is “testing and tracing.” Wichowsky said it’s something people have seen at many other colleges, although the way in which these tests are implemented is different.

“Colleges elsewhere do much more frequent testing and surveillance testing of their student and staff and faculty populations,” Wichowsky said.

With the new testing policies in place for this semester, there’s some hope that COVID-19 will be more controlled.

“It’s a good idea, but it’s a small sample of people so it’s not going to do much. I think testing everyone would be better,” Mazukelli shares.

DeLeon said the University of Illinois tests their students weekly.

“Things like Marquette turning away students because they don’t have enough symptoms for testing, I feel other universities are handling COVID better than Marquette is,” DeLeon said.

Marquette’s current testing rules for COVID-19 say that a student is only allowed to get tested if they are showing symptoms, or are selected for the weekly surveillance testing.

“We were limited in terms of resources, in terms of not having enough tests and not being able to offer that as frequently,” she said.

“We were testing students who were coming in feeling symptomatic, right, and then you would get a test and that’s just too late. We know from public health that, that sort of surveillance testing, we’ve seen it work at other campuses, but it’s hard with the campus our size, with our resource constraints,” she said.

With these obstacles in mind, Wichowsky said testing is not the only policy in play at Marquette.