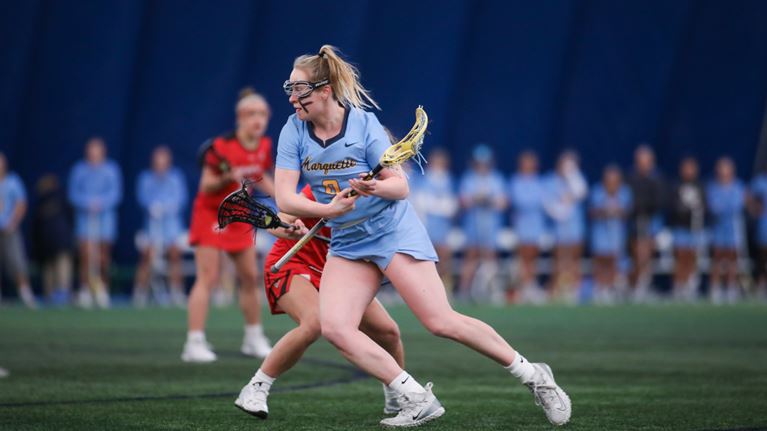 Marquette women’s lacrosse lost to Cincinnati Sunday afternoon at Valley Fields by a score of 20-19. Although the game was high-scoring and close, the Golden Eagles were unable to secure their first game of the season.

Fifth-year senior Megan Menzuber lead the team in goals, scoring six out of her eight attempts. Menzuber also contributed three assists on the afternoon. Sophomore Emma Soccodato finished second on the team with four goals including a couple of back-to-back goals in the second half.

Redshirt senior Jules Horning had a rough day in the net, recording only three saves and allowing 12 goals in the first half. Senior Sophia Leva then started the second half in the net and was able to post a stronger defensive stat line, snagging nine saves on 17 shots for a .529 save percentage.

Meanwhile, Cincinnati had balanced scoring effort throughout the day. Four players had three goals or more, lead by junior Kylie Nause and senior Monica Borzillo, who scored five goals each for the Bearcats. Borzillo also lead the match with seven assists.

It was an up-and-down day for the Cincinnati goalkeepers, as junior Kate Brocato was removed midway through the second half and sophomore Gianna Pope took her place. However, after Pope failed to record a save on four shots, Brocato came back in and finish with five saves, including the game-winning save on a shot from junior Lydia Foust.

A lot of scoring took place in the first five minutes of play, and Marquette even edged a lead by as much as four. However, after a 3-0 run by the Bearcats, two coming from Nause, Cincinnati took the lead. Cincinnati went into half up 12-8 thanks to a goal from sophomore Peyton Mottice in the final minute. Mottice finished with two goals on four shots, and also picked up three fouls.

The second half began with two quick goals from Menzuber to bring CU’s lead to two points, but goals from Nause, senior Taylor Gysin, and first-year midfielder Lindsey Durkota made it a five-goal lead, with Cincinnati leading 15-10. Marquette fought back, going on a 6-0 run to take the lead for the first time since the first half. Goals came from Menzuber, Foust, Soccodato, sophomore Hannah Greving and redshirt first-year Leigh Steiner.

Both teams traded goals down the stretch as Marquette built a 19-17 lead with under four minutes left, courtesy of senior Caroline Steller’s second goal of the day. However, a goal by Cincinnati’s Borzillo trimmed Marquette’s lead to one with 3:49 to go.

After an MU timeout to regroup, Borzillo struck again to tie the game with 1:38 left. It came down to the wire when Cincinnati senior Alyssa Adams scored her fourth goal of the game with 22 seconds on the clock. Marquette had a chance to tie with less than ten seconds left due to a yellow card being called on CU’s senior defender Alexandra Fess. However, CU’s Brocato made the save on the free position attempt by Foust, and that ended it.

Cincinnati won the draw battle, grabbing up 24 draws compared to Marquette’s 17, and both teams had 11 turnovers. Marquette outscored the Bearcats 11-8 in the second half, but it wasn’t enough to pull the win.

The Golden Eagles will now have a week to prepare for a matchup against Notre Dame Fighting Irish at Valley Fields Feb. 21.

This story was written by Jackson Gross. He can be reached at jackson.gross@marquette.edu or on Twitter @JacksonGross6