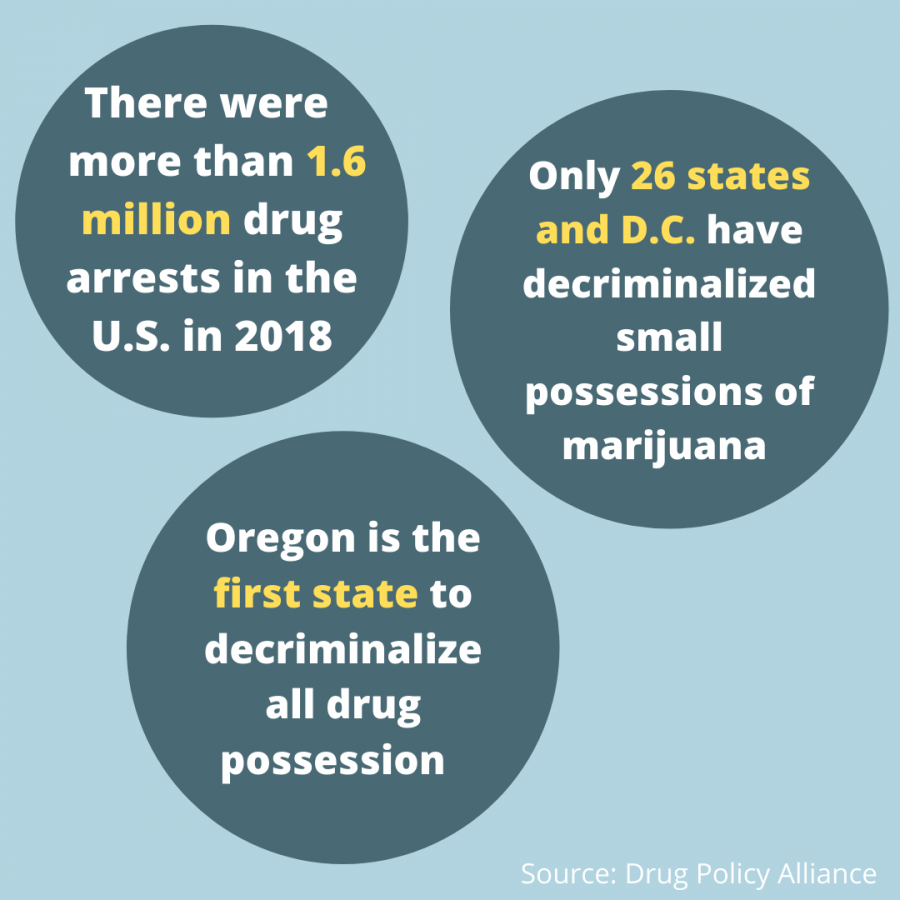 The United States federal government should consider decriminalizing all drug possession and attempt to mend the damage caused by the “War on Drugs” that has plagued American communities. In the United States, there were more than 1.6 million drug arrests in 2018 and more than 86% of these arrests were for possession only.

Oregon became the first U.S. state to decriminalize the possession of hard drugs such as heroin, methamphetamine and oxycodone Feb. 1. Police can no longer arrest someone for containing small amounts of these drugs. Instead of incarceration, those who possess the drugs will face either a $100 fine or a health assessment that could lead to drug addiction counseling. Oregon is one of states that has a more liberal attitude on drugs, as it was one of the first states to decriminalize marijuana use in 1973.

Wisconsin, on the other hand, is relatively strict in its drug laws. Less than 200 grams of marijuana possession can land a person up to 3.5 years in prison. Wisconsin also has the highest incarceration rate for Black men, at 13%.

Oregon’s decriminalization of hard drugs was a response to the War on Drugs, a government-led initiative that aimed to stop illegal drug use through tough prison sentences, which began in the 1970s under the Richard Nixon administration.

The War on Drugs had a clear racist objective. Instead of lowering the amount of drug use, the War on Drugs led to excessive levels of imprisonment, especially in largely disadvantaged communities of color, through racial discrimination by law enforcement and harsher prison sentences. According to The Sentencing Project, African American adults are 5.9 times more likely to be incarcerated than whites and Hispanics are 3.1 times as likely. In 2015, more than one in four people arrested were Black, despite drug use rates not substantially differing among different ethnic groups.

Despite its goals to reduce drug use, the War on Drugs was largely ineffective. Overdoses and use of opioids were four times higher in 2018 than in 1999. The third wave in opioid deaths came in 2013, with increasing use of synthetic opioids, such as fentanyl, increasing by 10% from 2017 to 2018. The states in which opioid use is the highest, such as West Virginia and Ohio, also tend to have strict drug laws even for less potent drugs like marijuana.

Opioid use is correlated with untreated psychiatric disorders, current substance abuse and social or familial environments that encourage use. There are also socioeconomic risk factors for opioid addiction. According to the National Center for Biotechnology Information, at risk groups include people of a lower socioeconomic status, insecure housing and those who did not graduate from high school.

It is clear that the solution to drug addiction is not the militarization of the police and tougher penalties for possession. High levels of incarceration have made already marginalized groups more vulnerable, by straining relationships and breaking apart families. A parent in prison leads to financial instability, feelings of shame and poor school performance. Those with a parent in prison are three times more likely to suffer from behavioral problems and twice as likely to have a learning disability, according to the Population Reference Bureau.

Drug decriminalization could be beneficial to many states, especially those with high rates of drug abuse, deaths by overdose and drug incarceration, like West Virginia, Ohio, Maryland and even Wisconsin. Decriminalization saves money by reducing prison costs and prioritizing health over punishment, as those who use drugs are more likely to receive help in rehabilitative programs as opposed to prison.

The benefits of decriminalization can be seen through other countries. Portugal decriminalized drug possession 2001, and between 1998 and 2011, the number of people in drug treatment increased by more than 60%. The percentage of people behind bars also decreased from 44% to 24%. The Netherlands, where drug use is also decriminalized, has lower rates of addiction and drug use than the U.S.

The U.S. has the highest incarceration rate in the world at 724 people per 100,000, second to Russia, costing $182 billion annually. Instead of strengthening the police force and enforcing tough disciplinary measures, which have been proven to fail, it is time for states, or better yet the federal government, to follow suit in Oregon’s effort to decriminalize drugs.