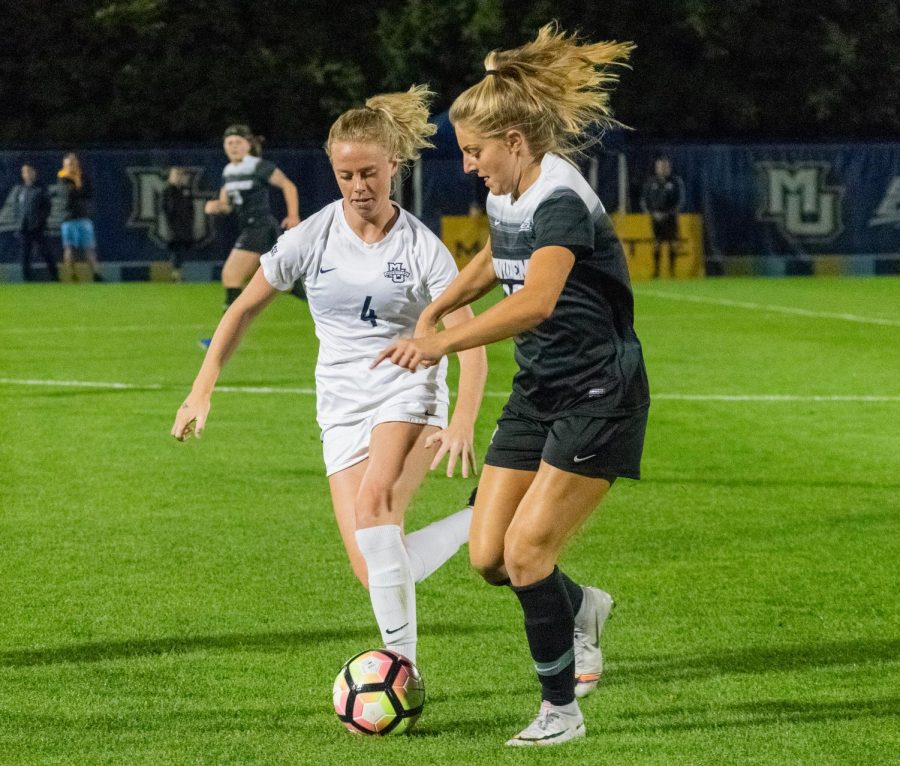 Then-redshirt first-year defender Bonnie Lacey fights for the ball in a match against Providence last season.

The Marquette women’s soccer defensive backline has received a lot of attention over the last few years. After all, it did consist of two anchors in defenders Emily Hess and Bri Jaeger, who started all but a combined 15 games over their four years at MU.

“Those two I think are kind of like the epitome of a Marquette women’s soccer player,” senior defender Maddie Monticello said. “They knew the culture since their freshman year and they were able to share that with everyone else. They just had this mentality that is hard to find in a lot of people and I think that left a big impact on our field.”

Junior defender Madison Burrier said it was Hess and Jaeger’s consistency that impacted her the most.

“If I wasn’t having my best game, I knew I had Bri and Emily to my left and right,” Burrier said. “You could count on them, you could lean on them, they were consistent across the board every single game.”

Despite the subtraction of Hess and Jaeger to graduation, this year’s MU backline still remains one of the more experienced units for first-year head coach Frank Pelaez.

Monticello, who started all 17 matches last year, said one factor that attributed to the success of the backline is trust.

“With the experience of our backline, and I know we have some freshmen coming in, but whenever we do defensive drills we all trust each other,” Monticello said. “(We) all like rely on each other to get what you need to get done, build each other up and then taking care of how we feel goes a long way to keep us united.”

Redshirt sophomore Bonnie Lacey said the relationships built over time are an advantage of the unit’s consistency.

“There’s a level of closeness we all kind of have with each other, where we can come to each other, express how we’re feeling about a certain situation or anything and it brings us together instead of dividing us,” Lacey said.

After not seeing the field in her true first-year season, the Sheboygan Falls, Wisconsin native made five starts in nine matches last season.

“The big lesson I took away from last year is that you can count on your teammates for support with things if it goes right or wrong and that at the end of the day, everyone plays for each other,” Lacey said. “And that the lows are even more important than the highs because you learn so much from a loss versus a win, even.”

As MU entered the 2020-21 season with Pelaez as the new leader at the helm, the Golden Eagles also entered with a new defensive coordinator in Steve Bode.

As it is every season, teams lose and add players, forcing schemes to change. Bode said that remains the same this year as well.

Though it has been over a year since Pelaez, assistant coach Erin Scott and himself have been at MU, Bode said the coaching staff are still doing some players’ evaluations due to COVID-19 taking away normal opportunities.

However, that is not taking away the confidence they have in each of the 30 players on the team.

“Some have more experience than others but, for us, we’re looking at … what we can do,” Bode said. “For us, it’s ‘hey, listen, we’re looking to try and give more opportunities this spring then not, and see where everyone’s at.’ That’s really important as we continue to build the culture and the program.”

Monticello, who is one of the anchors on this year’s backline with Burrier, said she feels like she has everything to lose with it being her last year of playing soccer at Marquette.

“I put a lot of that (pressure) on myself because I want everyone around me to succeed and I want the program to succeed,” Monticello said. “So I’m like, how much can I impact that and what can I do whether it’s on the field, off the field, after a game (or) before the game? I think I just see the bigger picture a lot more now that I’m a senior.”

Bode said he can see the season meaning a lot through Monticello’s eyes and actions, but it is what she has done so far in her MU career that speaks more.

After starting 14 out of 18 matches and serving as a captain in her first season, Burrier saw her role change for the Golden Eagles last season.

The journalism major started the first three games of last season off the bench as a midfielder before earning her first start of the season Sept. 8 against Utah State. She would then start two more games before heading back to a reserve.

Then things switched, as Burrier would go on to start the last five games of the season at center back. The change from the attacking third to the defensive third created versatility in the Dublin, Ohio native’s style of play.

“It’s nice because we have a lot of midfielders who are very attacking-minded,” Burrier said. “So being able to help them out, especially because they are so close to me and knowing that when I was in the midfield how much I appreciated having a center back who was able to lead me and kind of give me positional advice and different things like that, that definitely helps me to see both sides of it.”

In addition to Burrier, Bode said there are several players who can play in multiple positions, and in a COVID-19 world where coaches need to take account of the physical demands of the game for a player, it has become more valuable.

Burrier, Lacey and Monticello all said they have seen changes and picked up on new things with Bode’s coaching.

For Monticello, it is bringing “some accountability, swag and bite to how you play and attack right away.”

“Everything is so much faster with pace and I think that’s going to give us a little edge as we go forward now,” Monticello said. “Because instead of sitting back and waiting, we kind of have this confidence to be like, no I’m gonna step first. This whole line is going to be there first and we’re going to clear the ball and do everything we can instead of waiting.”

For Lacey, it is the importance of balancing worrying about your own position and the awareness of where others might be placed while going to win the ball back.

Burrier emphasized the importance of positioning as a whole unit when in motion.

“It’s like the whole backline just needs to be a unit in general,” Burrier said. “It can’t be one person kind of going off doing their own little thing because if one person strays, it ruins the whole backline as a whole. Just be on the same page and just constantly hammering it in that when you’re back there, you’re working together.”

Bode said the biggest strength amongst Burrier, Lacey and Monticello is the fact that the trio is very coachable and wants to grow both as soccer players and defenders.

“As a coach, when you work with players like that (it) makes your job easier,” Bode said. “They’re sponges, they’re trying, even if it’s not perfect all the time which it’s not going to be, they’re trying and over time, we believe that we’re going to get it right, more so than not.”

When asked who has stood out through the last few weeks, which consisted of two games, Bode sided with a familiar theme/message of the Pelaez era — team-first mentality — mentioning that is what he hopes to continue building within his unit’s culture this season.

“If we’re going to have any kind of success this season, it’s going to be because of what we do as a team,” Bode said. “Individually, we do have talent. But the game of soccer is if you’re a team first, you have good chemistry, you’re on the same page, you can win even if you’re not the more talented team. So that for us is the main focus at this point.”