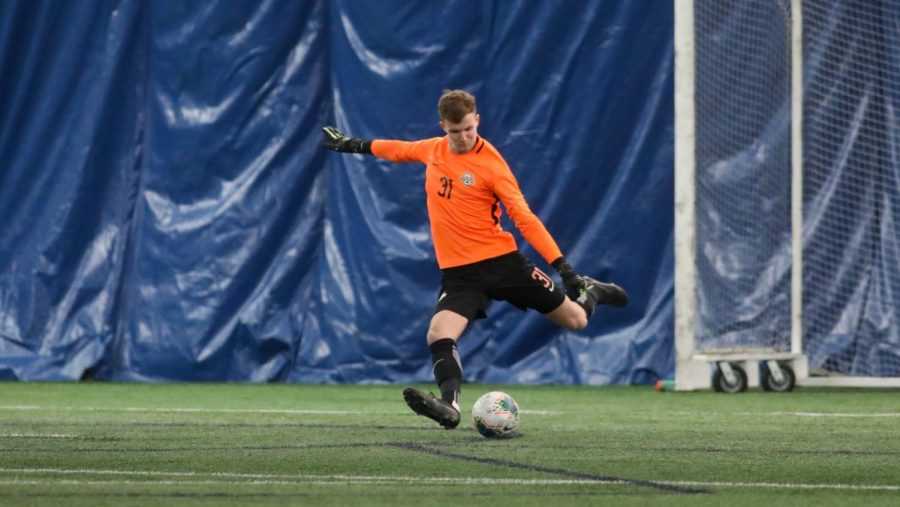 The Marquette men’s soccer team could not have envisioned a much better start to their 2021 spring season. The squad has started out on a high note ever since their first game Feb. 3, winning three games in a row in overtime.

The defense has been stellar, the offense came through when it mattered most and the goalkeeping has posted three clean sheets against Loyola Chicago, Northern Illinois University and St. Louis. These three clean sheets would not have been possible without the contributions of redshirt sophomore goalkeeper Chandler Hallwood.

Hallwood transferred from Gannon University, a Division II school in Erie, Pennsylvania. In his one season of play with the Golden Knights, he recorded an 18-3-0 record, the most single-season wins in program history.

“At the minute I’m not seeing too much of a difference with the standard from DI to DII, (because) we had a good setup at my old school,” Hallwood said. “(We) played against some good teams.”

In his first three games with the Golden Eagles, Hallwood has recorded seven saves in 219 minutes on the pitch and has allowed zero goals. He said he has noticed a bit of a different style of play during his time at Marquette thus far.

“Style of play at my old school was more kick long, we had very big, strong strikers, so we’d kick long a lot, whereas coming up into Marquette the philosophy is to play out the back a lot more,” Hallwood said. “So a bit of a different coaching style here — more technical I’d say, whereas the other one was more kick it long, we’ll just scrap for seconds.”

As a native of Halifax, England, one would think the redshirt sophomore keeper had to adjust to a brand new American style of play once he made his way 3,000 miles across the Atlantic Ocean. Hallwood said things have actually not been all that different, and he credits that to head coach Louis Bennett and his staff.

“Coming across to the United States, I thought it’d be a big difference, but with … English coaches, I think they’ve brought over the culture from England … to here,” Hallwood said. “So I don’t see much of a difference to be honest.”

Bennett said that the program wanted to add a third goalkeeper that could potentially end up as a first-string keeper. He said the qualities that Hallwood brings to the team are something that the Golden Eagles were missing.

“We wanted him to bring something that we may not have, which he’s got,” Bennett said. “He’s good in the air, he’s got height, he’s got a presence about him (and) he can distribute the ball a long way.”

Bennett has taken advantage of those attributes, as Hallwood has played the most minutes in-goal so far throughout the first three games. Junior goalkeeper Cedrik Stern, who already possesses two years in the program serving in net, said the goalkeeping unit welcomed the Gannon University transfer with open arms.

“We try to help him ease into the program as much as we could,” Stern said. “It’s never easy for transfers to come in, or new guys in general to come in … but as a whole team we try to help to make it easy for all the new guys, especially we as a group of keepers.”

Despite the obstacles that COVID-19 brought last semester when it came to building team chemistry, Hallwood said the hot start to the season has allowed him to mesh with his new teammates.

Stern said there is always pressure to perform during games, but knowing there is depth within the goalkeeper position has been reassuring.

“It’s just good to see that we can exchange players without losing too much quality and we get the best out of everyone,” Stern said. “As I mentioned, we can all help win games and ultimately that’s the goal we all have … Seeing that we all help the team and we all can be a part of that — I think is very important to see.”

Even though it is just his first season at MU, Hallwood already has big aspirations for himself and the team this season and beyond.

“I want to come in and make sure everyone has the best year possible, both on and off the field,” Hallwood said. “Hopefully I have a big, successful year, win the BIG EAST hopefully and get a national ranking.”