Creighton hangs on to beat Marquette 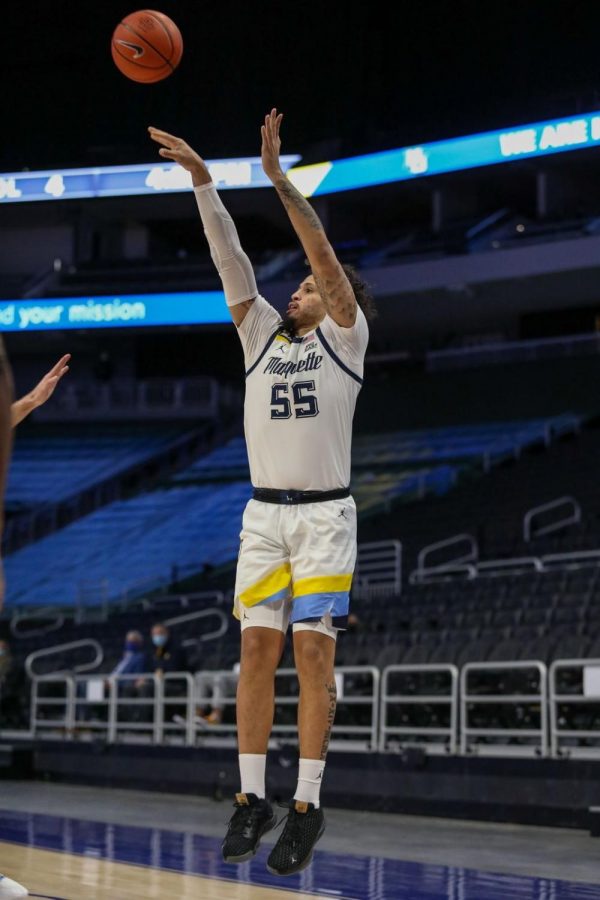 Coming off a close win at home against Butler, Marquette hosted the No. 15 Creighton Bluejays, a team they had previously upset when they were ranked No. 9 team in the country.

The Golden Eagles put up a fight once again, but this time Creighton came out on top by a score of 71-68.

For a majority of the game, Creighton was in control and outplaying the Golden Eagles, but Marquette was able to stay within striking distance. The Bluejays went into halftime on a 7-0 run, leading 38-33.

The deficit for Marquette grew to as much as 12 in the second half, but they were able to keep the game in check and go on small runs to keep themselves in the game.

Marquette never tied the game or had a lead, but they got themselves within two points off a few clutch threes by sophomore guard D.J. Carton and first-year forward Dawson Garcia.

After junior guard Marcus Zegarowski hit one out of two at the free throw line to give Creighton a three-point lead, the last shot went to senior guard Koby McEwen with a chance to tie it up. He just missed a shot that was contested at the top of the key, and Marquette lost what would have been a key win.

A big key to this game was how Creighton attacked the offensive glass. In the previous matchup, Marquette had the advantage when it came to rebounding, this game was a different story.

“A lot of their offensive rebounds were a result of long rebounds, they were the first to the ball off their long shots,” head coach Steve Wojciechowski said. “We’re not going to win against teams as good as Creighton only getting four offensive rebounds.”

Wojciechowski said that Lewis is not 100% and despite wanting to play, he was shut down after playing just eight minutes. He said that played a big factor in the rebounding battle.

“Justin’s our best rebounder, he has a nose for the ball,” Wojciechowski said. “A healthy Justin Lewis helps us a lot.”

Marquette’s leading scorer was Carton, who had 16 points on 6-for-11 shooting from the field, including those two tough threes in the final few minutes.

Carton had just two points on three shot attempts going into halftime, and it has become a trend for him to come on strong in the second half while not being as much of a factor in the first half. Wojciechowski said he would like Carton to be more aggressive throughout the entire game.

“That’s something that we’ve talked to him about. His teammates understand that and it’s something he’ll grow into,” Wojciechowski said. “We’re a better team when he’s pressing.”

Senior forward Jamal Cain started the game on fire, shooting 4-for-4 with a signature turnaround jumper as well. After that, he went 1-for-6 to finish 5-for-10 with 14 points. He also added a team-high seven rebounds and three assists.

The only other Golden Eagle in double-digits was senior forward Theo John, who finished with 10 points on 5-for-5 shooting. He was in foul trouble late in the game, which Wojciechowski cited in why the team struggled with rebounds in the second half as well.

After a few games of almost nothing but points from the starters, the Golden Eagles did get more bench production thanks to sophomore guard Symir Torrence, redshirt junior guard Greg Elliott and, to the surprise of many, junior guard Jose Perez.

After not playing since the second game of the season back in November, Perez played 12 minutes, scoring four points. Torrence tacked on three with an and-one layup and Elliott scored seven on 2-for-5 shooting.

“Jose got reps with the guys that have been playing and did a good job,” Wojciechowski said. “At times we struggle to score from the perimeter, and in practice Jose showed the ability to make shots and score the ball.”

For Creighton, junior forward Christian Bishop led the way with 14 points and eight rebounds. Notably, he twisted his ankle at the tip-off of this game and exited, but came back mid-way through the first half.

“They tried to take away our paint, and when teams do you can get good shots,” Wojciechowski said. “We made some and then we missed a number of them, and a big part of our halfcourt offense is getting second-shots.”

Marquette falls below .500 at 9-10 and now looks forward to traveling to Villanova on Wednesday. That game will be at 8 p.m. Central Standard Time in Philadelphia. The game will be telecasted on FS1.