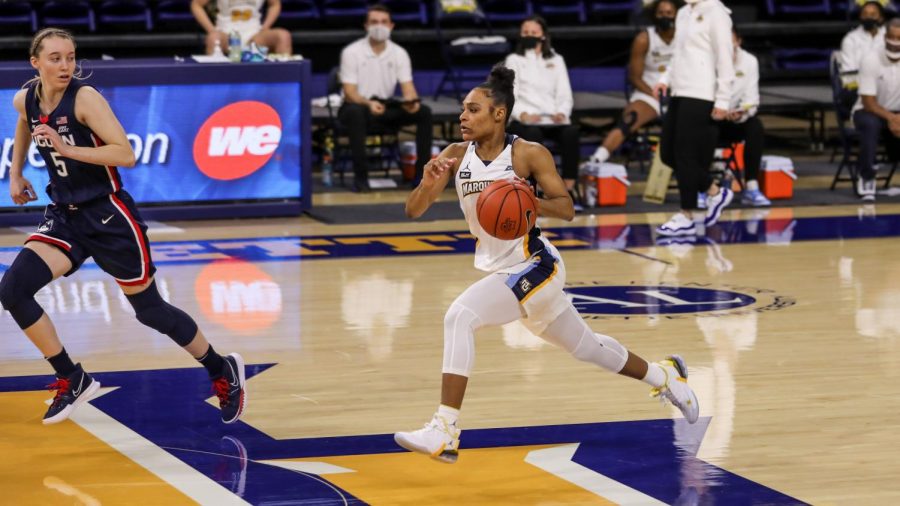 In a battle for first place in the BIG EAST standings, the No. 3 UConn Huskies showed why they have been one of the country’s best teams in recent history, defeating Marquette 87-58 Friday night at the Al McGuire Center.

UConn seemed to get whatever they wanted down low, as they dominated the Golden Eagles and finished the game with 46 points in the paint on the night.

“Our backside awareness needs to be better so that they don’t back-cut you,” head coach Megan Duffy said. “We also need to do a better job of taking their vision away because that’s what Bueckers and their other guards are so good at doing.”

Marquette kept the game in reaching distance as they only trailed 21-14 after the opening frame, but the Huskies pulled away in the second quarter and outscored the Golden Eagles 18-4 in the last 7:31 before halftime. UConn had a 41-22 lead at the break, a lead the Golden Eagles would never be able to recover from.

First-year standout guard Paige Bueckers led the way for the Huskies yet again, as UConn’s leading scorer had 30 points on 12-for-18 shooting to go along with three rebounds and two assists. Bueckers also went 6-for-9 from behind the 3-point line.

The Hopkins, Minnesota native tried getting her teammates involved in the first half, but Bueckers came out of halftime firing on all cylinders and the first-year guard exploded for 17 points in the third quarter alone to give the Huskies a 71-44 advantage going into the fourth quarter.

“She’s as good as advertised and better,” Duffy said. “She just has an incredible feel of letting the game come to her and getting her teammates involved. Her ability to change her game within the game is really something I’ve been impressed with watching her on film.”

Shots were just not falling for Marquette in the first half, as the Golden Eagles shot just 30% compared to UConn’s 62%. The Golden Eagles also struggled from deep, as the team went 3-for-14 from 3-point range in the game.

Marquette’s leading scorer, senior guard Selena Lott, was held to just four points on the night, shooting 1-for-7 from the field and dishing out five assists. Lott was averaging 16.1 points per game this season coming into tonight’s contest.

Despite the tough loss, Marquette players had something else to smile about as their families were finally allowed to watch their daughters from the stands.

“It’s great that we were able to have fans again, I think it’s a really big part of the game, having them cheer us on,” Van Kleunen said. “Overall it was just really nice seeing them again.”

Marquette (12-3, 9-2 BIG EAST) remains in second place in the conference following the loss and the Golden Eagles have another tough test ahead of them as they take on No. 20 DePaul at the Al McGuire Center Sunday.

“I think we just have to learn from tonight by going into practice and watch the film, make our adjustments and take the positives from tonight’s game before going into Sunday,” Van Kleunen said. “We’re going to have to be ready to go and play our best against another top BIG EAST team.”

Marquette and DePaul tip off at 11 a.m. Central Standard Time on Sunday from the Al McGuire Center. The game will be televised on FS1.