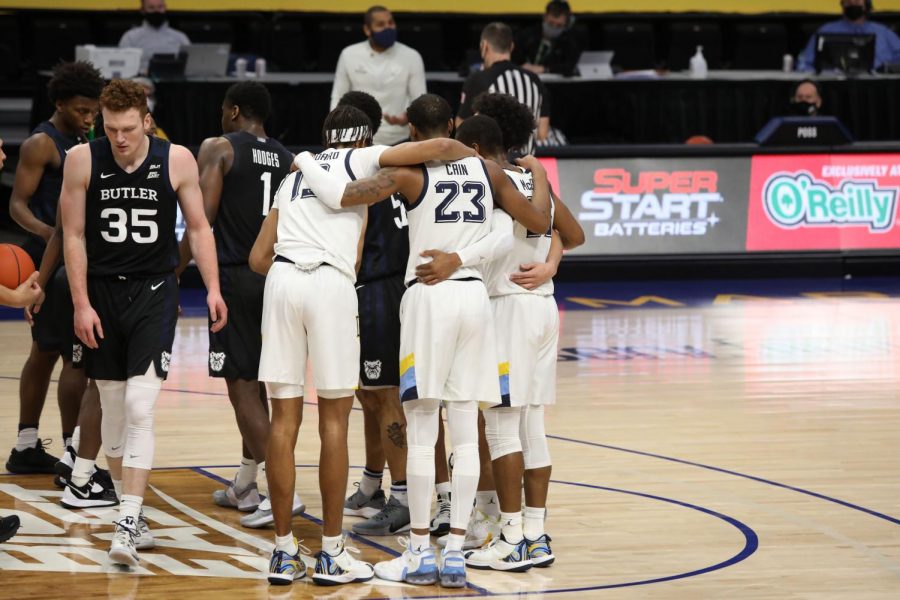 Senior forward Jamal Cain (23) and teammates huddle during the team's game against the Butler Bulldogs on Feb 2. (Photo courtesy of Marquette Athletics.)

Those were the three words senior forward Jamal Cain used to describe the Marquette men’s basketball program. Those three words likely resonate with a majority of the hundreds of players whose MU careers have come and gone, with plenty of evidence to back that up.

Whether it be Jimmy Butler’s resilience to play over 47 minutes in Game 5 of the 2020 NBA Finals, Dwyane Wade’s confidence that allowed him to hoist up a floater from behind the 3-point line to beat the Chicago Bulls in 2009 in double overtime or the discipline it took for 42 former Golden Eagles to make it to the NBA, it is pretty hard to deny that there is something unique about the 107 acres of land between W. Kilbourn Ave. and W. Clybourn St.

Those that had the discipline to play professionally after spending their college careers in front of the Marquette faithful have had a lasting impact on the players in today’s program. Cain said he tries to model some elements of his game after a couple of former Golden Eagles, one of which was a two-time All-BIG EAST Honorable Mention, and the other was previously named BIG EAST Player of the Year.

When it came time to make his college decision, Cain said the family-oriented foundation of the program led him to continue his academic and athletic career at Marquette.

“When I stepped foot on campus, I just felt a part of the family,” Cain said. “They welcomed me with open arms, made me just feel like I was at home. That was probably one of the biggest aspects of me being here.”

Making the team feel like a family is a mindset that has been taught over the 104-year history of the Marquette men’s basketball program, and the coaches have been acting as the guiding force. After head coaches such as Bill Chandler, Al McGuire, Hank Raymonds, Tom Crean and Buzz Williams spent time at the helm, Steve Wojciechowski and his staff find themselves at the head of the table in a family that has won over 1,600 games.

“They (coaches) do a good job with telling guys to portray a message to the teammates just to show leadership and speaking up and not being shy,” Cain said. “Some guys lead the huddles, it’s not just one guy always leading huddles.”

Having multiple leaders on the team is in full effect this season especially, as MU has four players with double-digit scoring averages for the first time since the 2016-17 season when Markus Howard, JaJuan Johnson, Andrew Rowsey, Luke Fischer and Katin Reinhardt found themselves averaging over 10 points per game.

First-year forward Dawson Garcia has been one of the team’s leading scorers and leading rebounder, and fellow first-year forward Justin Lewis has also posted 8.1 points and six rebounds per game, primarily coming off the bench. In addition to the coaching staff, the veterans on the team have also been able to get the young newcomers accustomed to the Marquette way of play.

“For the most part I think Jamal and Theo and Koby have done a really good job trying to set the tone as leaders on a team that there’s a lot of new faces that we’re heavily reliant on,” Wojciechowski said in a postgame press conference Feb. 2. “We’re trying to teach in a very unusual time.”

As the veterans filter out and a new era of Marquette men’s basketball begins, the values that are preached every day at practice, at games and in team meetings never quite fade away — they instead get passed down. For those who are wrapping up their careers in the blue and gold, the lessons learned stick with them, both on the court and off.

“Take care of your business, really don’t make any excuses towards anything that you have to do,” Cain said. “Always give your best, on and off the floor.”