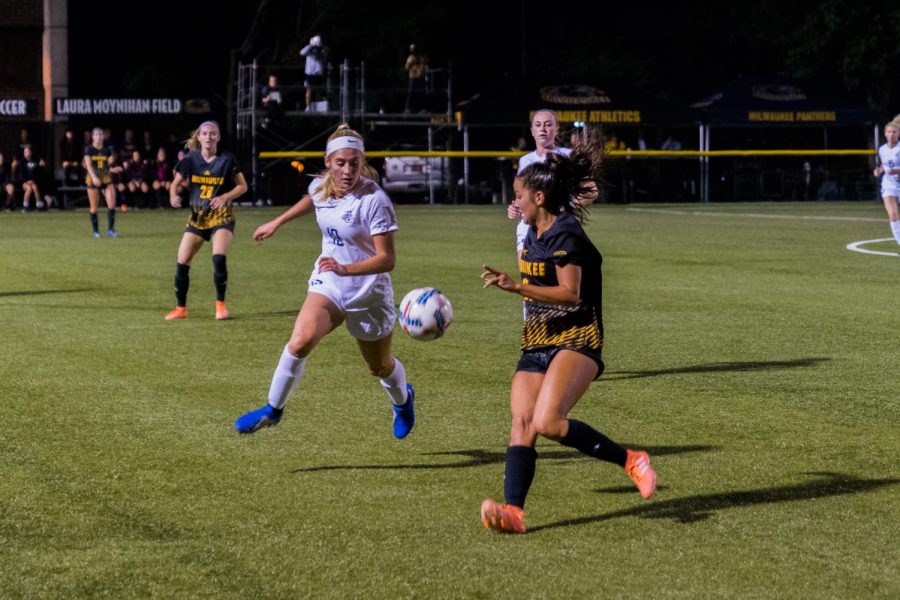 For the entirety of the Marquette women’s soccer program’s existence, a crosstown rivalry showdown has appeared on the schedule. However, for the first time since 1993, those rivals, the University of Wisconsin-Milwaukee and Marquette, will not compete in the “Milwaukee Cup” this season.

The matchup between the two women’s programs, which usually happens sometime in September, will not happen as of now.

Overall, the rivalry is a little more intense than most games. University of Wisconsin-Milwaukee women’s soccer head coach Troy Fabiano said the intensity stems from the proximity of the two schools.

“I think any time you have two schools that are that close to each other, you’re going to bring out the best,” Fabiano said. “The players get excited to play in it.”

Sophomore defender Bonnie Lacey said that for her, the intensity stems from the close connections the players have with one another.

“I’ve lived in Wisconsin all my life. I fully understand the in-state rivalries so the (UW-Milwaukee) girls, I’ve either played on club teams with them all growing up or played against them,” Lacey said. “So it is a lot of hype for the games and they’re always so fun.”

Senior defender Maddie Monticello said even the week leading up to the game is centered around the matchup.

“I remember the past three years, we’ve definitely scouted very heavily for UW-Milwaukee. We would tailor that whole week of practice for how UWM plays, even more than normal,” Monticello said. “Like (Lacey) was saying, there’s a lot of girls from Wisconsin and the Milwaukee area so those girls really take it to heart and that trickles down to everyone else. Before the game in the locker room, it’s going. Everyone’s so hype. People get pumped for all games but I definitely see it elevated more for UWM.”

The rivalry between Milwaukee and Marquette has been incredibly tight for the 28 games between the two teams. So tight that the two schools share the same record: 10 wins, 10 losses, eight ties.

Junior midfielder/defender Madison Burrier said part of the reason the record is so close is because the style of play in a rivalry game tends to be different compared to that of a normal matchup.

“It’s even-matched because it’s not necessarily about your style of play, soccer-wise,” Burrier said. “When both teams in big rivalries like that get on the field, it’s purely about heart and grit, and the last two years we’ve played them, it’s come down to the wire of who wants it more at the end of the game.”

Monticello also said that alumni reach out and tend to get involved, so the players know the history and meaning of the rivalry.

“It goes beyond us. When we have that game, I hear from so many alumni from Marquette,” Monticello said. “It’s so much more than just the 11 on the field. I think that goes to show because this rivalry has been going on for (around) 30 games now. The whole Marquette community gets involved and it’s really cool.”

Burrier said she usually marks the UW-Milwaukee game on her calendar each year.

“For me, it’s definitely a bummer. You look forward to those games. There’s always a certain hype around it in the locker room before the game,” Burrier said. “But in all honesty, that hasn’t really crossed my mind too much just in the sense of, we’re just excited to get out there finally and play.”

Despite skipping the rivalry for a year, Fabiano said he and his team are just happy that they are able to have a season this year.

“Obviously, we’re all excited to get back on the field, and hopefully everybody is safe as we’re trying to explore the new climate we’re in but for the game, it’s obviously a neat game,” Fabiano said. “You talk about how close the schools are and a lot of players know each other. For the community, it’s a big draw. We get big crowds at both places and that environment won’t be there. As a coaching staff, we’re just excited to be on the field and play someone besides ourselves.”

Marquette women’s assistant coach Steve Bode’s ties to Milwaukee have immersed him in the rivalry for years. As a high school player, Bode was just down the road at Marquette High School. He then played for UW-Milwaukee as a collegiate soccer player before coaching for several years at Marquette.

“A lot of times at Marquette High our coach has taken us to Engelmann (Stadium) or Valley Field to watch the games. A lot of people outside the area don’t really realize how cool the rivalry is,” Bode said. “That Milwaukee Cup rivalry, on both the men’s and women’s side, it’s pretty special.”

The match between the crosstown rivals has its impact in multiple ways for Bode. The connection between the two programs runs deep in his history.

“I have so many ties to both universities. I have a lot of legacy at Marquette; grandpa, dad, two older brothers went to Marquette and I would go to games growing up as a club player, as a high school player,” Bode said. “That’s cool, as a high school player, to watch those games and then to have the opportunity to then play in those games and now to coach in the games, it’s awesome.”

Monticello said the absence of the rivalry this season was disappointing, but she was hoping there might still be a matchup down the road.

“Even though we can’t play them this spring, I would hope we could play them in the fall,” Monticello said. “I think it’s just kind of keep your eyes on the games we have scheduled and then hopefully beat them in a big rivalry coming up this fall.”

Until the rivalry is resumed, the hype will continue to build for the 29th Milwaukee Cup.