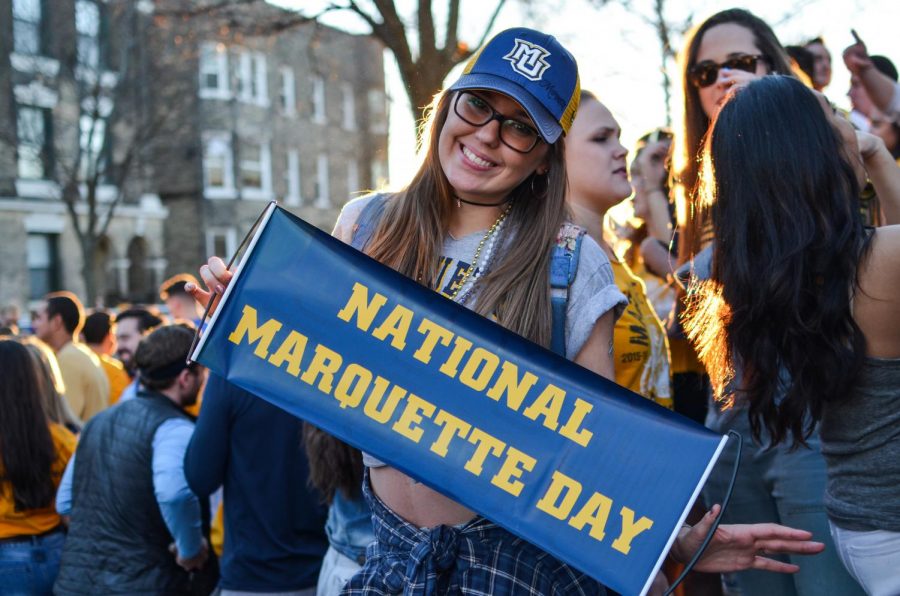 A Marquette student celebrates a past National Marquette Day

National Marquette Day (NMD) will take place on Saturday, Mar. 6 with a larger focus on philanthropy this year.

Due to COVID-19 prohibiting individuals from attending in-person games and large gatherings, Stacy Mitz, Assistant Vice President for Engagement, states how alumni can continue their support for the Marquette community remotely.

“While alumni are celebrating at home this year due to the Covid-19 pandemic, they can continue their support of important initiatives such as scholarship aid and student programming.” Mitz said.

These initiatives will be channeled through the fundraiser titled National Marquette Day @ Home.

“In 2021, National Marquette Day @ Home is focused on fundraising this year as there won’t be any NMD in-person-game-watching parties organized like there has been in the past.” Scott Kuykendall, Senior Associate Athletic Director, said.

Danielle Josetti, Executive Associate Athletic Director, weighs in on what drove the offices of University Advancement, Alumni Relations and Engagement to continue the event despite such an unprecedented climate.

“They wanted to keep the streak of having NMD so the idea was to promote NMD @ home.” Josetti said. “Alums can donate to the Blue & Gold Scholarship Fund and get a free t-shirt from the alumni office. It’s another way to engage our alums in a year when we aren’t able to have in-person events.”

Although NMD takes on a different form this year, the alumni event is an annual celebration with roots dating back decades.

“NMD is a tradition dating back to the 1960s that brings the Marquette nation united together in pride and spirit to honor the values of the University.” Kuykendall said. “In its present form, NMD has been around since 1992. The celebration was preceded by Spirit Day, which dates back to the 1960’s.”

However the date of this year’s NMD wasn’t confirmed until recently, leading to a lot of confusion among the student body.

Kuykendall clarifies why NMD was moved to its current date.

However Matt Jones, senior in the College of Business Administration, explains how many students are planning on safely celebrating NMD more than once this year due to previous confusion.

“We were under the impression that NMD was cancelled for this year and for a lot of seniors this is the last NMD as students, so we wanted to be able to celebrate it one more time.” Jones said. “We decided Feb. 6, along with now Mar. 6, would be perfect since there is a home game against considerably one of our biggest big east rivals.”

Jones later states that the student celebration of NMD on Feb. 6 will not lessen the significance of NMD on the university confirmed date of Mar. 6.

“Students would celebrate NMD every weekend if they could.” Jones said.

Reflecting on his last year celebrating NMD as a student, Jones discusses the nostalgia that the holiday brings.

“I come from a very irish neighborhood where we love to celebrate St. Patrick’s Day.” Jones said. “NMD reminds me of this in the sense that it doesn’t matter who you are or who you know. You can just wander around and have fun because at the end of the day, you know you’re all part of the same family.”

Although these values will be shared from a distance this year, Jone’s is adamant that students remain optimistic and continue to participate in the holiday despite such restrictions.

“I believe our students are smart and responsible enough to participate in NMD in a safe and enjoyable manner.” Jones said. “NMD tradition is a staple within the Marquette community and is the kind of memory that students will cherish forever.”

This story was written by Claire Driscol. She can be reached at claire.driscol@marquette.edu.