From Minnesota to the BIG EAST: Bueckers, Karlen have experienced it all 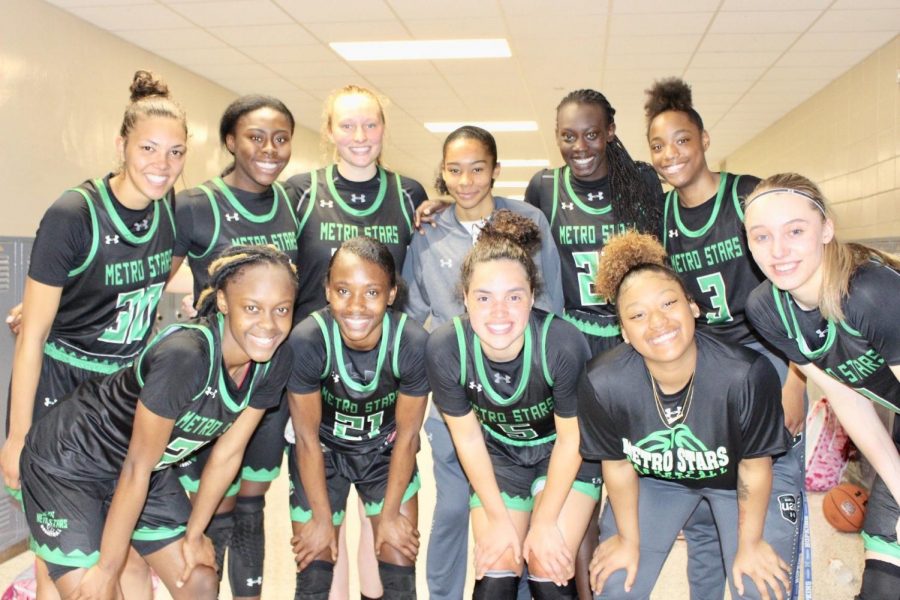 When Marquette hosts No. 3 University of Connecticut Friday night at the Al McGuire Center, all eyes will be on the Golden Eagles to see if they can find a way to upset one of the best programs in the country.

But for two players, the game on Friday will have a little bit more importance and meaning.

Being opponents on the big stage is not something new for the Minnesota natives.

It was Bueckers and Hopkins who came out victorious.

Last year that rivalry turned into a friendship when Karlen joined the Minnesota Metro Stars, which was the same AAU team Bueckers played on.

“Leading up to last year, we’ve always kind of been rivals,” Karlen said. “We had a lot of matchups that were tough so just being able to play together that last year was great because we knew each other’s games and we kind of knew how to play off each other in a way that both of us could be really efficient.”

“First time I saw her, she was really quiet and kind of laid back,” Starks said. “I knew she could play but I wasn’t 100% sure where she was at. Liza had always experienced wanting to be on our team but was basically convinced to play with the older team and I don’t think her experiences were what she expected.”

Over the next few years, Karlen and Starks kept in constant communication, and the thought of playing for Starks alongside Bueckers was too good to pass up.

Starks said Karlen and Bueckers became really good friends and added that it was Bueckers’ reputation as a people person that helped catalyze it.

When asked what two words accurately portray the two from their time together with the Metro Stars, Starks quickly answered with “committed” and “hard-working.”

“When I think about those two, (they are) committed to the process, committed to working out and just really smart kids,” Starks said. “They understand the thing they need to do and they go out into the gym and continuously put time in to perfect their craft.”

In their time playing together, Karlen picked up on several things from the 2019-20 National Gatorade Female Athlete of the Year.

“One thing that Paige is incredible at is probably her pull-up. Obviously, her passing is unreal but her pull-up jump shot is insane,” Karlen said. “That’s something that I’ve kind of been trying to add to my game and something I’ve been working on a little bit.”

Starks said she saw Karlen’s toughness and mentality go to the next level with Bueckers around her.

Aside from their basketball abilities, Starks said Bueckers and Karlen both have traits that people might not know about them.

For Karlen, Starks said she could be an Olympic swimmer.

“Unfortunately she probably had to give up one for the other, but she’s a big-time swimmer,” Starks said.

Meanwhile, Starks said Bueckers does not like the spotlight.

“You would think with all the popularity and all the attention that she gets, she would jump out on the floor and want to put up 30 a night,” Starks said. “No, (it’s) ‘I want my teammates to shine.'”

Starks also mentioned that Bueckers considers herself to be a great dancer.

“She really thinks that she’s the best dancer in the house,” Starks said. “She thinks she has a little flair in her inner dance moves and likes to do her little TikTok videos.”

Even though the two played in the same circles in high school, the recruiting paths for Karlen and Bueckers were vastly different.

Back in June 2019 Karlen told Mike Peden of Twin Cities Sports Broadcasting that Marquette was always a serious thought. But things changed for her a few years ago when former head coach Carolyn Kieger left for Penn State.

After an appearance at an AAU Tournament in Pennsylvania in April 2019, Karlen began receiving more looks from teams like LSU, Penn State, Wisconsin and Xavier, but committed to the Golden Eagles after forming a relationship with now-head coach Megan Duffy and her staff.

Meanwhile, Bueckers played for USA Basketball and was ranked as ESPN’s No. 1 recruit. She committed to Geno Auriemma and UConn in April 2019 after the Huskies earned their 12th-straight bid to the Final Four of the NCAA Tournament.

At the time of Bueckers’ commitment, UConn was still a part of the American Athletic Conference, a conference where they had a record of 118-0 during their seven-year stint. When the BIG EAST announced the Huskies would return to the BIG EAST conference, it meant Karlen and Bueckers would be opponents once again.

“When we found out that UConn was going to be (back) in the BIG EAST, I think it was just excitement more than anything,” Karlen said. “We really both enjoyed playing with each other. Being able to see a familiar face these next four years will be really exciting.”

Regardless of the differences in recruitment, the former AAU teammates are playing in the same Division I conference, but with very different roles in their programs.

Karlen has become a consistent bench option for Duffy, averaging 5.8 points and 3.7 rebounds per game this season.

“She’s unique for a team because of her size,” Duffy said. “In that forward position, she can really shoot the basketball and can knock down perimeter shots and that’s only going to get better as she gains more experience.”

Starks said she saw Karlen have some hesitation in shot selection early on in the season, but is now seeing confidence build within the 6-foot-2 forward.

“I’m starting to see that confidence and getting comfortable with the system now that she’s a few games in and she’s played a couple of national games (where) everybody’s watching,” Starks said. “She’s now starting to become more calm, comfortable and a little more confident in herself.”

Karlen credited her recent success and finding herself in Marquette’s system to the confidence and trust that she has received from the upperclassmen and Duffy.

On the other hand, Bueckers is leading UConn in every single statistical category and is off to an exceptional start to her first-year campaign.

She has received BIG EAST Freshman of the Week Honors six times so far this season and was recently the lone first-year named to the Wooden Award Top 25 List for women’s basketball.

Auriemma, who is second on the Division I women’s basketball wins list, said he has been most impressed with the consistency in Bueckers’ approach.

“She’s pretty level and doesn’t get too far ahead of herself,” Auriemma said. “She doesn’t get bogged down in what happened (in) the previous play. She’s got a great tempo. There isn’t any part of the game that she feels uncomfortable in and that’s kind of rare for freshmen.”

The 11-time national champion head coach said Bueckers has not necessarily done anything out of the ordinary as a leader but instead is leading more with her play.

“I don’t think she knows how to lead yet. Right now, she plays and she’s trying to figure her way around college basketball and that’s her way of leading right now,” Auriemma said. “Down the road, she’ll become a leader, but right now I would say her leadership consists of just playing. She’ll make some plays and she’ll do some things but other than that, I don’t think she’s started using her voice yet.”

Since the Huskies’ 67-61 win over then-No. 18 Tennessee on Jan. 21, Bueckers has followed with three consecutive 20+ point performances.

“The way Paige likes to play is the way she’s playing right now,” Auriemma said following UConn’s 94-62 win over St. John’s on Wednesday. She saw the pass through Aaliyah (Edwards). Nobody saw that coming. It was just an incredible find by a kid who just sees things that other kids don’t see.”

For Starks, she sees that Bueckers is comfortable in the Huskies’ system and continues to be impressed by her passing, even if she believes the 5-foot-11 guard should take the shot herself.

“I remember calling her after one of the games and said ‘Paige you are passing the ball to kids who don’t even want the ball sometimes.’ But that’s just her,” Starks said. “She wants them to get involved, she wants to score and she wants them to have an opportunity to have success.”

Following the Huskies’ 100-67 victory over then-No. 16 DePaul this past Sunday, Bueckers told Fox Sports’ Sarah Kustok that the biggest adjustment she has made to her game is the speed and pace of college basketball.

Though the two are now over 1,000 miles from each other, Karlen said her and Bueckers speak about once a month.

“It’s nice to just check in on her to see how she is doing,” Karlen said. “Obviously playing for Geno is a whole different story, (but) it’s just nice to kind of hear her experience on that.”

At times when the Golden Eagles do not have a game, Karlen said she enjoys watching Bueckers play.

“I love watching Paige play. Obviously, Paige isn’t an easy player to stop but I think something that makes her so deadly is the fact that she can drop five points (or) 30 points on any given night but her passing ability is just off the charts,” Karlen said. “That’s a big part of her element, which is going to be hard but hopefully we can pull it off.”

Come Friday, Karlen and Bueckers might be suited up for different teams, but both are looking forward to seeing a familiar face on the court.

“I have played against Liza a whole bunch of times in high school,” Bueckers said. “It’s always fun playing against people you know, especially when you’re not in the state of Minnesota where you guys have to play. But now I’m excited to see her and excited to get out there.”

For Karlen, this game will bring extra pride for continuing the trend of Minnesota players in the BIG EAST.

“I love it,” Karlen said. “Although they’re going to be competition, I’m really proud of Minnesota and to see all this Minnesota talent across the board in the BIG EAST and I hope to continue to see more over my four years.”