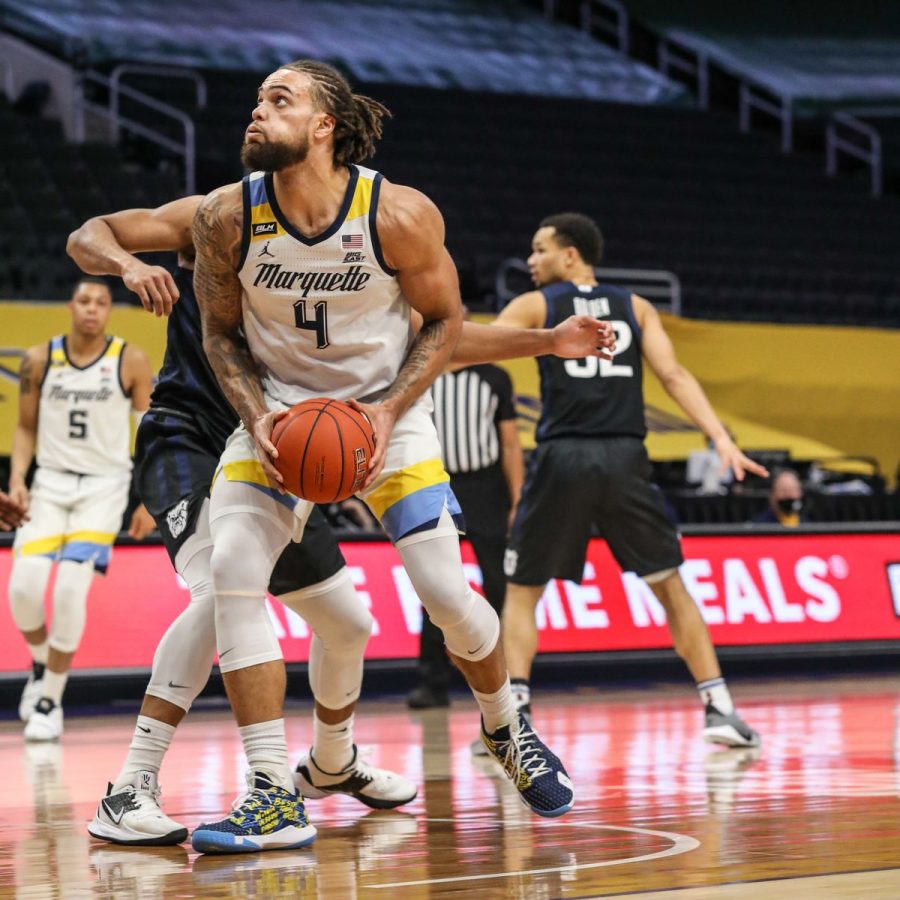 Senior forward Theo John (4) pivots to make a move to the hoop against Butler on Tuesday on night (Photo courtesy of Marquette Athletics.)

After coming into the day having dropped the last three games, Marquette hosted the Butler Bulldogs and came away with a 70-67 win.

Marquette was in control for a majority of the game, mostly due to the team’s defense and efficient shooting from the floor. However, it took surviving a strong comeback attempt from Butler to secure the victory.

Marquette’s shooting percentage only went up from there, but Butler’s did as well.

At one point in the second half, Marquette led by 18 points. The team held a double-digit advantage until about the two minute mark, then things got interesting.

The Bulldogs began a full-court press defensively, something that St. John’s had done for the entirety of Marquette’s last game. This caused problems for the Golden Eagles, including a jump ball that gave Butler possession.

After some free throws from MU and clutch shots by Butler, graduate guard Jair Bolden hit a three with 18 seconds left to bring the Bulldogs within two.

However, that was the only clutch three Bolden would make.

Butler had possession with just eight seconds on the clock and managed to get Bolden a good look for what would have been a game-tying three after McEwen hit 1-of-2 at the free throw line.

The three came up short, and Marquette’s three-game losing streak came to an end as the buzzer sounded.

“They ran a play to the corner and we practiced it, we knew it was coming,” first-year forward Oso Ighodaro said. “We tried to get a contest on it and luckily he missed the shot.”

Sophomore guard D.J. Carton and redshirt senior guard Koby McEwen led the game with 18 points each. They each had three assists and Carton led Marquette with nine rebounds.

Down low, Marquette struggled with foul trouble, as first-year forward Dawson Garcia and senior forward Theo John both fouled out of the game.

“When Theo and Dawson got in trouble I tried to stay ready,” Ighodaro said. “I want to do anything to help us win and today I had to get some more minutes and do my thing.”

Part of the reason Butler was able to come back was due to Marquette’s turnovers. The team committed a total of 21 on the game, with eight of those coming from McEwen.

“We have to continue to work on the turnovers, and we will,” head coach Steve Wojciechowski said.

First-year forward Justin Lewis missed his second consecutive game with a bone bruise, and both Carton and John had injury concerns in the game as well.

John left for just a few seconds after falling hard on his ankle, and Carton went down in pain after falling on his face, but both were able to return to the game.

“Our guys fought through a lot of adversity today,” Wojciechowski said. “They showed a lot of toughness in gutting that out.”

In Marquette’s last game, they did not get any points from their bench with Lewis out. Outside of a combined five points from Ighodaro and sophomore guard Symir Torrence, no other bench players recorded a basket.

The Golden Eagles finished the day shooting 61.5% from the field. Marquette’s two left-handers, Carton and Garcia, went a combined 11-for-13 from the field with 32 points.

For Butler, guard Chuck Harris led the way with 16 points on 5-for-8 shooting. Notably, most of those points came after Harris lost a front tooth due to being hit inadvertently by Theo John.

Wojciechowski said that without Justin Lewis and with the foul trouble, it changed up the type of lineups they used in the game, which took some getting used to.

“We used some lineups that we haven’t practiced much with,” Wojciechowski said. “Our guys were able to overcome that, and I’m really proud of them.”

Marquette will host No. 15 Creighton at Fiserv Forum this Saturday at 4 p.m. Central Standard Time. In its previous matchup, Marquette defeated then-No. 9 Creighton in Omaha in the first matchup of BIG EAST play.