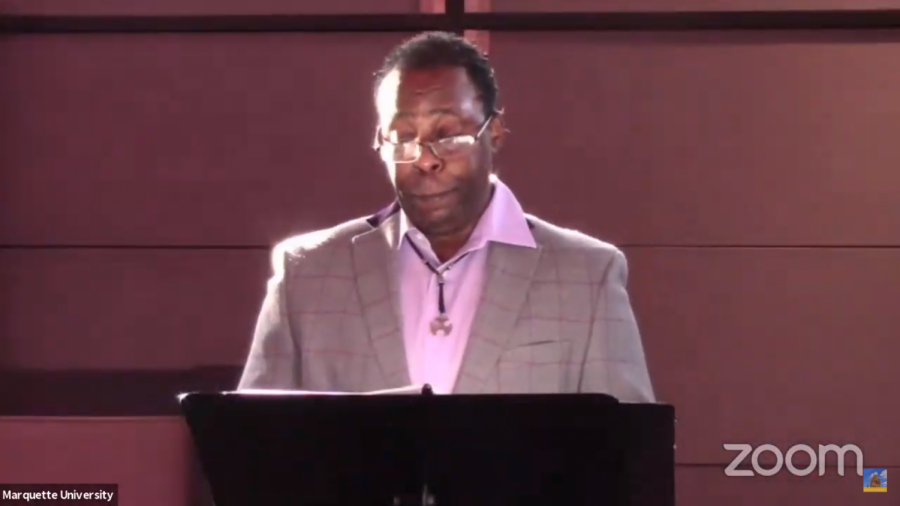 Despite the day that honors the life and legacy of Doctor Martin Luther King Jr. being on the third Monday of January, Marquette still showed respect to the late activist by having a virtual prayer Jan. 28. According to the university, participants were allowed to reflect on the words of Dr. King and other civil rights leaders.

With the topic of race becoming more prevalent in our country than ever before, the five-year tradition of the Martin Luther King Jr. prayer has a different feel to it than previous years. William Welburn, vice president of inclusive excellence at Marquette, said the focus for this year’s prayer service is different than normal.

“This year the script really focuses in on racial justice,” Welburn said. “We hope that the script, which has been meticulously curated, will inspire those who read and those who listen. This is a critical year for understanding.”

Welburn’s role on campus is to help with diversity and inclusion within the Marquette community. And while he said he tries his hardest to promote change on campus, he knows it is not the easiest process.

“I work with anyone in the university community who has a commitment to change. Sometimes things work out. Sometimes they don’t. But at least we try,” Welburn said.

However, Welburn said he has goals for this semester as far as having more inclusion on the Marquette campus.

“We will roll out the much-awaited results of last year’s climate survey, solicit input from across the community, and propose a set of recommendations to the university community. This is the strategy used in 2015 and we accomplished much of what we hoped to see happen,” Welburn said.

Myles Buchanan, event coordinator for Marquette’s Black Student Council, has seen some of the changes the university has made in regard to making students of color more comfortable on campus.

“I have seen a change within the campus community when it comes to the way Black students are treated,” Buchanan said. “I now feel like we are being noticed and acknowledged more than before I left.”

Last semester, the Black Student Council led a sit-in at Zilber Hall in protest of the employment cuts at Marquette and to fight against the racism that has occurred on campus. While the university is trying to make a change on the campus, Buchanan believes students can help make a difference as well.

“What the students can do is just treat everyone the way they want to be treated. That’s honestly the most simplest thing but makes the biggest impact. As well as being an advocate for (Black Lives Matter), which is just more than posting it on your social media, it’s showing up to BSC events that advocate for it, and learning how they can be a part of the change that we are trying to make here at Marquette,” Buchanan said.

Change is something that we are all rooting for on the Marquette campus. Louis Jackson, a junior in the college of Communication, said he hopes the protests last summer calling for racial equality all over the world can educate students on campus.

“I hope the people on campus realize the racism that is going on within our world,” Jackson said. “We all, of course, need to respect one another during times like this, but also educate one another. Make others realize why certain things are happening and how we can try and make a difference.”