D.J. Carton stepping into the spotlight in first year at MU 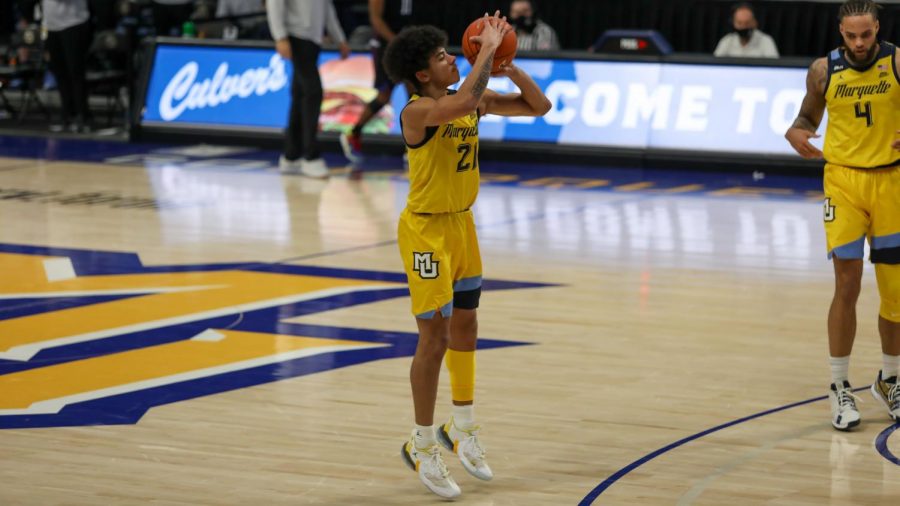 After just one season playing for Ohio State, 6-foot-2 sophomore guard D.J. Carton announced that he was transferring to Marquette April 15, 2020.

Nine months later, he is now the Golden Eagles’ starting point guard, and has grown into one of the team’s leaders in situations where they have needed it most.

In the 16 games this season, Carton is currently averaging 12.2 points per game at a 42.3% shooting percentage. He is also averaging 3.8 assists and 3.3 rebounds per game.

He did not start in the first three games, as sophomore guard Symir Torrence started in his place. Head coach Steve Wojciechowski inserted him into the lineup for the big win against Wisconsin.

Coming in as a four-star recruit, Carton started at Ohio State three times and played in 20 games before leaving due to personal mental health reasons. He averaged 23.9 minutes per game, scoring 10.4 points with three assists and 2.8 rebounds.

After the Wisconsin win, Carton said his first start was a step in the right direction for him and his ability to play with his new teammates.

“I’m learning how to control this team and be a leader amongst my teammates,” Carton said. “It’s a role that I can fulfill if I put the work into it.”

Prior to this season, Carton had not played basketball since he took his leave of absence at Ohio State in January 2020. Wojciechowski said in a press conference after the Wisconsin game that he liked the progress he had seen from Carton.

“He’s been away for a long time, so he’s still getting his legs underneath him,” Wojciechowski said.

Shortly after the Wisconsin game, Carton had a two-game run where he stepped up as a leader in the absence of Torrence, who was out due to a toe injury.

He scored 18 points on 7-for-13 shooting in a tough road loss against UCLA, and he scored 20 points while going 5-for-7 from three in the win over then-No. 9 Creighton.

He led the Golden Eagles in scoring in both of those games, but points were not the only thing he contributed. In that two-game stretch he had a combined 10 rebounds, nine assists and two steals. He was the leader of the offense.

However, to be a leader, one has to go beyond the stat sheet. A leader is also defined by the trust his head coach has in him.

In the Wisconsin game, Carton was given the ball in the final possession when the Golden Eagles were down. He drew the foul and split a pair of free throws at the line before first-year Justin Lewis won them the game on a put-back buzzer-beater.

That was not the only time Carton has been the go-to guy in a clutch situation. Almost all of Marquette’s games have been within single-digits, and Carton, along with redshirt senior Koby McEwen, have typically been the ones who take the big shots.

After the win at St. John’s, Carton said that taking shots late in the game is part of his mindset going into the contest.

“That’s my mentality, I let the game come to me,” Carton said. “I like to turn it up later in the game and things start to open up, and I have the trust from Coach to have the ball in clutch situations.”

Since the absence of former guard Markus Howard, the Golden Eagles’ offense has changed a great deal and become more balanced. That is still the case with Carton, but when Marquette needs a guy to give the ball to and let him get his shot, more often than not, that guy has been Carton.

The team will need more consistency from Carton in terms of shooting the ball. Since the Creighton game, Carton is 12-for-46 from deep, a 26% clip.

Carton has had more than four assists in all but five games this season, including the games he did not start in.

“D.J. is a really good player, and he’s shown great improvement,” Wojciechowski said. “He gives us a dimension where he can break down the defense.”