Lackluster offense in first half leads to overtime loss at Providence 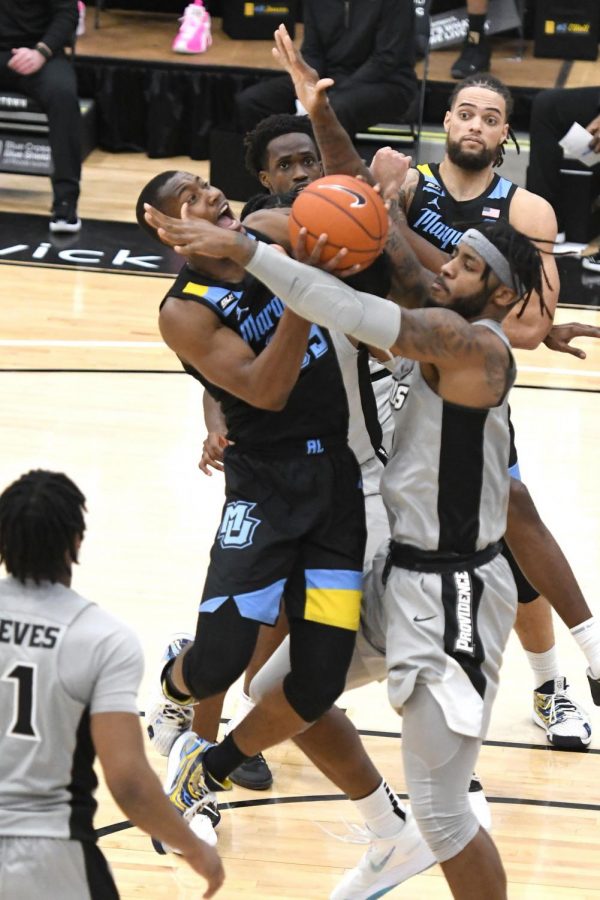 Fifteen days after beating Providence 79-69 at Fiserv Forum Jan. 12, the Golden Eagles headed to Rhode Island and fell to the Friars 72-63 at Alumni Hall Wednesday evening in the team’s first overtime game this season.

Ultimately, it came down to the final minutes and the Golden Eagles just could not convert down the stretch. The Friars outscored Marquette 21-9 in the last nine minutes of action.

“I thought our guys competed,” head coach Steve Wojciechowski said. “We had opportunities we didn’t capitalize on in a number of areas. We had the ball by the basket a number of times. We have to complete the play.”

At the end of regulation and with the game tied at 59, Marquette had two timeouts left with no shot clock, but the Golden Eagles were not able to hit a buzzer-beater.

“We just scored and we were going to run the same play with D.J. (Carton) and Providence mixes up their defenses quite a bit,” Wojciechowski said. “We wanted to go back to the play that D.J. got a dunk on and get the last shot of the half. We weren’t able to score. … We had a chance to eye the rim and get a good shot off, we just didn’t make it.”

In overtime, Providence edged Marquette 13-4 and held the Golden Eagles to a 2-for-7 shooting performance from the floor. Redshirt senior Koby McEwen, who scored a team-high 13 points, fouled out at the 2:22 mark.

Overall, the second half featured a much different team than the first. By the under-16 timeout, Marquette was within three points after a Dawson Garcia layup. The Golden Eagles had hit all four shots after halftime and held the Friars to 3-for-7 from the field.

In the last six minutes of regulation, the Golden Eagles were on a hot streak, which included a Greg Elliott 3-pointer to capture the 54-51 lead and a Theo John dunk to tie the game at 59 with less than a minute left in the game.

“We wanted to embrace it,” Wojciechowski said. “Every game in the BIG EAST is going to be hard fought and competitive and a man’s game. You have to embrace that.”

The last 25 minutes were the complete opposite of the first 20 minutes. In the first half, both teams severely struggled on the offensive end and the game was scoreless for almost the first five minutes. Marquette and Providence went 0-for-12 until the Friars’ Alyn Breed scored the first points of the game on a jumper at the 15:40 mark.

Neither team’s offense got better the remainder of the first half, either. Even though Marquette went on a 7-0 run to maintain a 9-7 lead, with 10:41 remaining Providence’s offense was shooting 15.8% and MU was 4-for-11.

At the under-eight timeout, the Golden Eagles trailed 13-11. Over twelve minutes in, Marquette had more rebounds than points with 12 boards. They also committed seven turnovers. Both teams shot a combined 11-for-36.

“We had good opportunities to start the game … and we didn’t,” Wojciechowski said. “Those plays can be deflating. … Offensively we have to tighten up a lot.”

Though the game was tied at 18 at the 3:34 mark, Providence had the 25-18 advantage and was on a 7-0 run heading into halftime. For the second straight first half, the Golden Eagles had more turnovers (nine) than field goals (eight) and they also had not made a 3-pointer.

David Duke scored a season-high 31 points to lead the Friars. He was on fire from both ends of the floor, shooting 46% from the field, going 4-for-8 from deep, grabbing six boards and contributing six assists.

“There’s nothing on the basketball court that Duke can’t do,” Wojciechowski said. “We did a really good job on him at Marquette. … Any time you’re playing a great player, which I believe Duke is, they’re going to respond.”

“The one area we didn’t compete like we could … was rebounding the ball,” Wojciechowski said. “It’s the reason we beat them at home is because we had eight turnovers and rebounded at a really high level. We didn’t get enough of that this evening.”