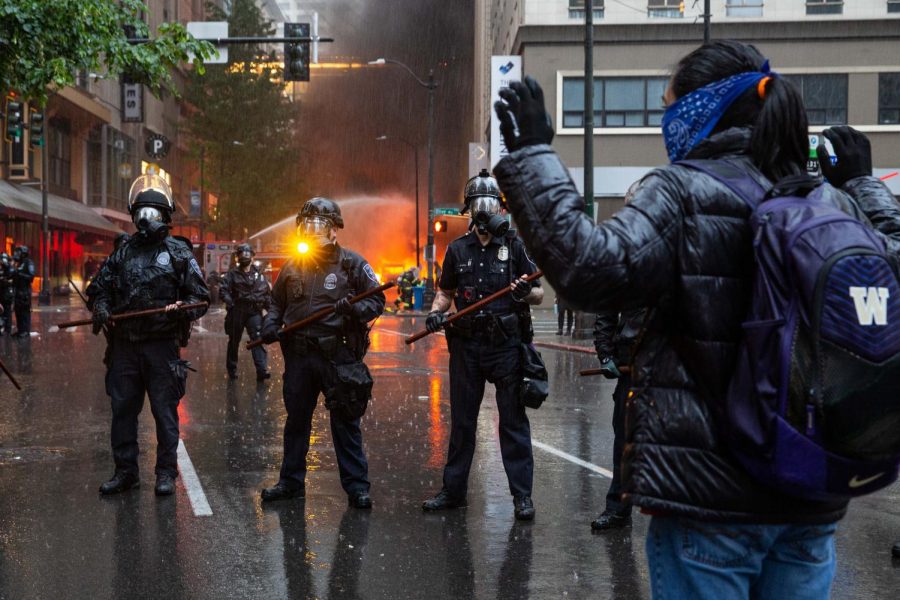 An individual stands in front of armed police officers during a Black Lives Matter protest in Seattle, Washington May 2020. Photo via Flickr

America is a place where domestic terrorists are greeted with gentleness and met with less force than peaceful protesters — especially if those protesting are Black, Indigenous and people of color. A recent example of this is the Jan. 6 storming of the United States Capitol.

What started out as a normal day ended with a domestic terrorist attack on the Capitol — the first Capitol building breach since the War of 1812. Complete chaos imploded at the Capitol due to former President Donald Trump’s doubt about the validity of President Joe Biden’s presidential win. Thousands of Trump supporters rushed to the Capitol as a desperate attempt to stop the validation of the election results.

This was never meant to be a peaceful protest, and this is apparent with the method of arrival of Trump supporters at the Capitol. The mob forcefully pushed past Capitol police to remove barricades and hop walls in order to make their way closer to the building. At this point, the only thing that stood between the terrorists and the Capitol building were law enforcement officers who proved to be ill-prepared for the situation. There are multiple videos of officers politely stepping aside and assisting in making efforts easier for the terrorists.

After this attack on the Capitol, which resulted in five fatal incidents and dozens of other injuries, most Americans, especially Black, Indigenous and citizens of color, compared this situation to the Black Live Matter protests held summer 2020.

A similar-sized crowd to that of the Capitol storming gathered outside of the White House June 1. This was a diverse group of citizens protesting George Floyd’s murder to call for the end of police brutality and racial injustice. Though they were peacefully protesting, protestors were hit with rubber bullets and were forced to run from tear gas.

Trump’s response to his mob, which was made largely of white supremacists, was gentle with words of love and support. Trump released a prerecorded video telling his supporters to “go home” but that “we love them and are very special.” If anyone was surprised that Trump would be gentle, to some of the worst people in the nation, you have not been paying attention these past four years. Being kind to them is being kind to himself — seeing as he holds the same racist and anti-Semitic views.

Unfortunately, it is not surprising that law enforcement handled the two situations in opposite ways. There is a deep-rooted notion that Black, Indigenous and citizens of color, especially when protesting for their rights, are inherently violent and threatening. Even if they are unarmed and protest peacefully, law enforcement often views this display of strength as their lives being endangered.

As the Capitol storming proved, the same endangerment cannot be said for domestic terrorists, especially when they are predominately white. Eventually, the mob of Trump supporters were met with tear gas and rubber bullets, but only when they had been inside the Capitol building for an extensive amount of time.

This highlights the weaponization of law enforcement against citizens of color and how white citizens have the privilege of being greeted with gentleness and met with less force, even in stressful situations. That would have never happened to Black Lives Matter protestors because to be Black, Indigenous or a citizen of color and do this means you are not going home afterwards. To do this as a BIPOC is to sign your name in blood to the long list of people that have been killed by the police. Citizens of color do not have the privilege of being a part of a terrorist attack in the afternoon and make home for dinner.

This is, unfortunately, the America that we live in, but the state of our nation can get better. President Biden, while he is not magician by any means, does hold the power to make change, specifically within the federal law enforcement, in a major way. Biden can introduce police transparency and a use-of-force guidelines at the federal level. This will help to build trust with the general public and allow for tactics like chokeholds and no-knock warrants to be banned nationally. President Biden taking initiative will be crucial to healing what is, right now, a lost nation.