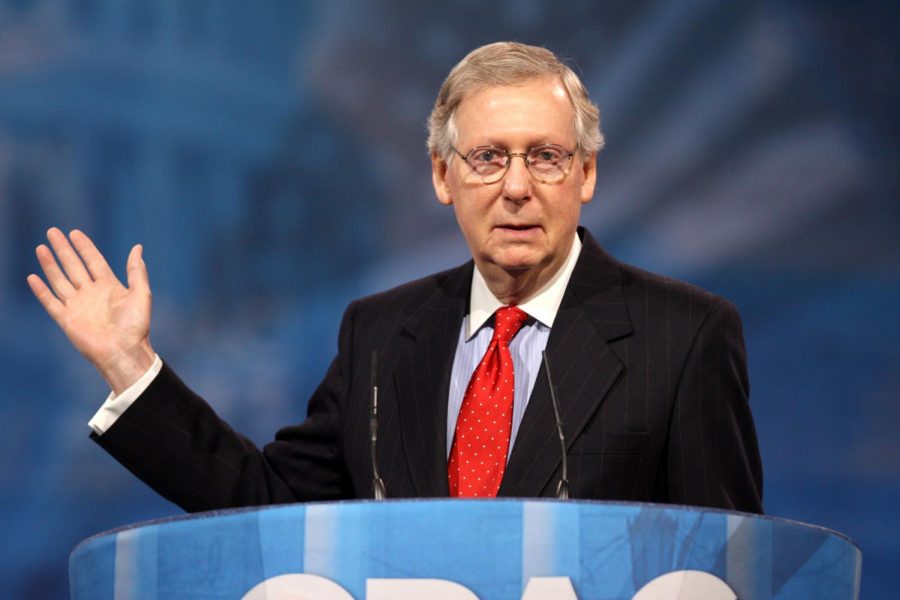 Yet Trump refused to acknowledge this result, and called upon his supporters to march to the Capitol and stop the certification of the election results, ultimately prompting supporters to riot and act with violence.

After the Jan. 6 insurrection at the Capitol, Trump’s legacy was coined a disaster by Illinois Representative Adam Kinzinger, one of many Republicans who pledged loyalty to Trump over the last four years. Kinzinger critiqued Trump after the insurrection. It took four years and an insurrection for many leaders of the Republican Party to recognize the immense damage to democracy brought on by Trump.

Republican Senator Mitt Romney, who also supported Trump during his presidency, explained the events at the Capitol were a direct result of a “selfish man’s injured pride and the outrage of his supporters whom he has deliberately misinformed … What happened (Jan. 6) was an insurrection, incited by the president of the United States.”

Four years was long enough. Trump is divisive, simply put. His supporters at the Capitol are individuals who have backed him and his nonsense for four years. Elected Republicans had a duty to the values and democracy of the U.S. to denounce Trump and his effort to stop the certification of the election results.

Republicans must continue to take a stand against Trump and uphold the American values we should stand for. It is necessary to democracy and the future of our country.

House minority leader Kevin McCarthy, who is and has been an ally of Trump for the past four years, pleaded for Trump to “accept his share of responsibility” for inciting his supporters to break into the Capitol. He also explained that Trump handled the riot poorly and should have immediately denounced the mob at the Capitol.

In addition to McCarthy, the Senate majority leader, Mitch McConnell, stood firmly against Trump in the days following the insurrection at the Capitol. At the certification of the election results, McConnell pleaded that the Senate had no liable reason to overrule the voters, as it would ultimately damage the American society and its government.

McConnell clearly understood that the election results were equitable, fair and just, not up for debate or questioning. He also explained that Trump fed the mob lies and provoked the violence at the Capitol. Trump incited domestic terrorism at the Capitol of his very own country, and he has made baseless claims that the election was “rigged” against him. McConnell is currently pushing for Trump’s second impeachment trial to be delayed; However, current Republicans in Congress have suggested that McConnell wants Trump gone.

McConnell must be held accountable for allowing Trump to continue his election fraud claims, as McConnell offered legitimacy towards Trump’s falsities after the election results in early November.

It is too little, too late. The Capitol insurrection was a direct and violent attack on democracy, equity and truth. Republican leaders such as McConnell and McCarthy have been complacent over the past four years of Trump’s presidency. They, too, are to blame for the unjust violence at the Capitol.

Republicans who have recently took a stand against Trump should be acknowledged; However, their injustices towards democracy over the past four years will not be easily forgiven and cannot be forgotten.

Th next four years under the Biden-Harris administration present America with a unique opportunity to restore unity and to restore democracy. Truth, honesty and a sense of the common good must be at the forefront of all communication. Then, and only then, a willingness to collaborate with individuals of opposing parties can be practiced, which prompts America to function as a democracy.

It is our duty, as the United States of America, to pledge loyalty toward this nation and our values, not an individual who we necessarily agree with politically. We must uphold democracy and denounce any person or any group of people who attack it.

Let the attack of the Capitol be an example of this. Unity, the common good and democracy must always prevail. We must hold our elected officials to this standard for the next four years and beyond. Democracy is what shapes America.

As Biden said in his inaugural address Jan. 20, “democracy is fragile. And at this hour, my friends, democracy has prevailed … That’s America. The right to dissent peaceably, within the guardrails of our republic, is perhaps our nation’s greatest strength.”