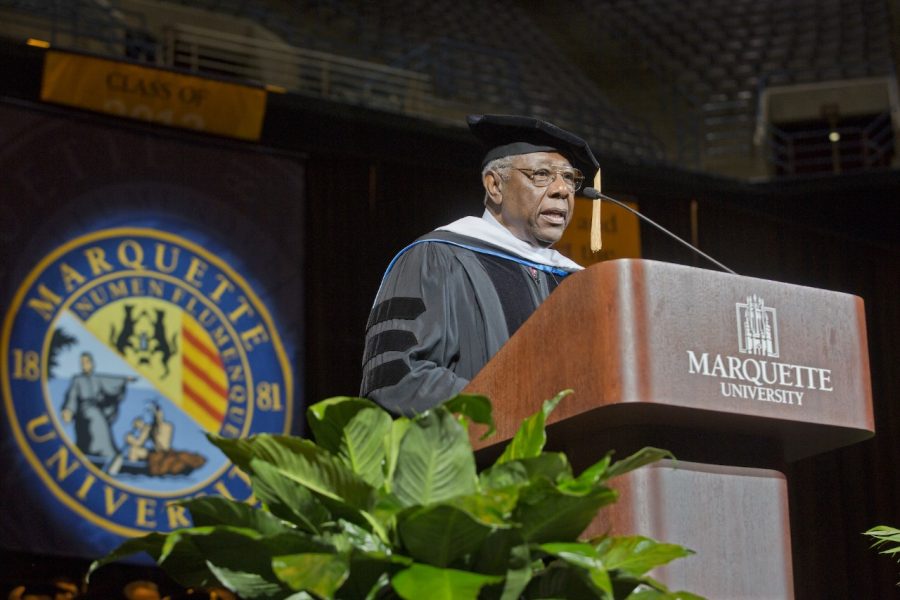 Hank Aaron was the speaker at Marquette's Commencement ceremony in 2012. (Photo courtesy of Marquette University.)

Major League Baseball lost one of its icons Jan. 22 when Hall of Fame slugger Henry ‘Hank’ Aaron died at the age of 86. According to the Fulton County Medical Examiner’s office Jan. 25, Aaron died from natural causes.

Aaron, from Mobile, Alabama, was a legend in baseball and in all sports. In Milwaukee specifically, his jersey number, 44, has been retired and hung up in the Milwaukee Brewers stadium since 1976.

He began his baseball career when he was 18 years old, helping the Negro Leagues’ Indianapolis Clowns to the World Series championship in 1952. In that same year, he signed a major league contract with the Milwaukee Braves.

The stats Aaron accumulated throughout his career form a resume that make him one of baseball’s all-time greatest. Most notably, Aaron was the all-time home run king, with 755, before Barry Bonds broke his record.

However, Aaron is still second on the all-time home run list, though many people still consider him to be the king due to the use of steroids circulating around Bonds’ name. Aaron said he was disgusted with the use of steroids, but he did tell Today back in February 2020 that he thinks Bonds deserves to be in the Hall of Fame.

Aaron made it to the All-Star Game 25 times in his career — the most of all time. He did so in just 23 seasons due to there being two All-Star Games in a three-year stretch from 1959-1961. The only seasons he did not make any All-Star Games was his first, where he still won Rookie of the Year, and his final season, where he played in just 85 games.

He finished top three in MVP voting seven times, winning the award in his fourth season in 1957. He also won a Gold Glove Award three consecutive years, from 1958 to 1960.

He is also the all-time leader in both runs batted in and total bases. He played in back-to-back World Series with the Braves in 1957 and 1958, winning in 1957. He had a batting average of nearly .400 in that series with three home runs and seven RBI’s.

“What you do with your life and how you do it is not only a reflection on you, but on your family and all of those institutions that have helped to make you who you are,” Aaron said in his speech.

What cannot be overlooked in the remembrance of Aaron is the racism and discrimination he endured throughout his life and his professional career.

Aaron said to the New York Times that during his career he had to have a police escort with him at all times due to receiving thousands of letters with threats toward him and his family, mostly when he was close to breaking the home run record that was held by Babe Ruth at the time.

He said that the threats “carved a piece of (his) heart away,” but he kept most of those letters for a long time to remind him of how far society still has to go in the fight against racism and bigotry.

After breaking that record and retiring from baseball, Aaron went on to become the Atlanta Braves’ vice president of player development in 1989. He was one of the first Black men to be in an upper-management position in Major League Baseball, and he served in that role up until his passing.

He also established the “Chasing the Dream” foundation in 1995 in order to help children between the ages of nine and 12 realize their dreams, as he did. Primarily through Boys & Girls Clubs, the foundation has given financial assistance to hundreds of children and families in need.

In 2001, a statue was built outside of Miller Park called “The Aaron Monument.”  It was unveiled one day before Miller Park hosted its first official major league game, as the Brewers moved from County Stadium to Miller Park. He also has statues at Atlanta’s stadium and in Eau Claire, Wisconsin, where he played for the Eau Claire Bears in 1952.

Brewers Hall of Fame shortstop and outfielder Robin Yount, who played with Aaron, said in a statement that he was the greatest player of all time.

“Hank was the biggest influence on my career,” Yount said. “He was a great man and his friendship will be sorely missed.”