Masks still in question for in-game use 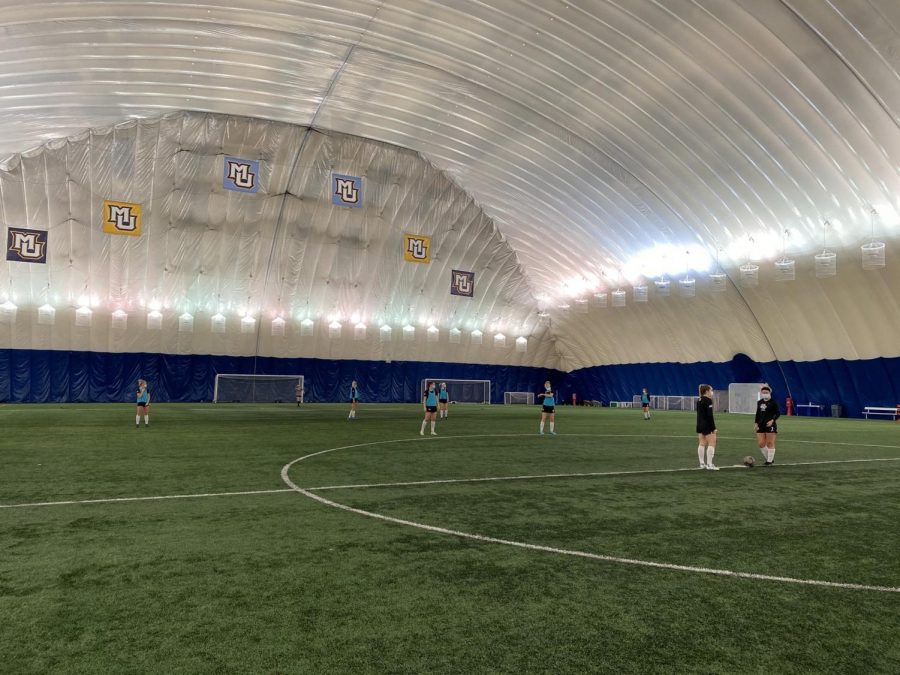 The women's soccer team was in the Valley Fields dome for their intersquad scrimmage Jan. 24. (Photo courtesy of Marquette Athletics.)

Masks are now a necessary part of daily life.

For individuals, wearing a mask at work and at the grocery store have both become a common theme.

One factor that is still debated is whether or not masks should be worn during exercise. The World Health Organization says on their website that “masks should not be worn during vigorous physical activity because of the risk of reducing breathing capacity.”

The Center for Disease Control also states on their website that “if you are unable to wear a mask because of difficulty breathing during high-intensity activities, choose a location with greater ventilation and air exchange.”

The NCAA does not require any masks to be worn during competition as they could get wet or even present physical difficulties for athletes during activities when there is contact to the head or face or when intense exercise is involved.

However, the Marquette women’s soccer team has been diligent in using masks during training, conditioning and lifting during the first semester and over winter break.

With the WHO, CDC and NCAA suggesting that masks can be difficult to wear during high-intensity activities, the women’s soccer team has been training as if they will wear them during games.

That being said, Maddie Monticello, a senior defender, said the team is planning on wearing masks during competition.

“We were told originally that we didn’t have to wear masks during games but they were just saying the City of Milwaukee might be requiring the masks for games so they keep on going back and forth,” Monticello said. “We don’t have a definite, as far as I know, but we’re preparing to wear them because we might as well be ready for it.”

“I have some friends on the east coast like Seton Hall and Georgetown were they’ve been wearing masks and what I’ve heard, they still don’t know about games but practices, they all wear the masks,” Monticello said.

Head coach Frank Pelaez said that he recently heard they would be playing in them.

“It’s a touchy subject because it depends on where you live,” Pelaez said. “Marquette is governed by what the city (of Milwaukee) protocols are. Everything changes so quickly so as of last week, it was suggested we were more than likely going to play in masks. Then a couple of days ago, it was more than likely we are not going to play in masks. As of today, and I’ve been saying that six months, it seems like no masks at games.”

With the City of Milwaukee protocols for women’s soccer still unclear, the Marquette women’s team is starting to adapt to the new normal of wearing masks during practice and conditioning. Although the NCAA states it could present a physical challenge during activities, the soccer team is starting to overcome those restrictions.

Monticello said wearing the mask during conditioning was a new challenge when it first started, but she has become more acclimated to the challenge.

“I would definitely say when I started the conditioning, it was tough,” Monticello said. “I’m from Chicago and last summer when masks were heavily mandated in Chicago, I actually did all of my training with the mask before I came back to school so I was pretty acclimated but it’s weird. It’s sliding down, it’s sweaty and you’re breathing heavily into it so it definitely is very uncomfortable. But I think everyone’s done a good job adjusting to it because it’s just the new reality.”

“In the beginning, it was definitely different,” Tabor said. “At home, I wasn’t necessarily working out with a mask on and now I’m transitioning back into breathing heavily into a mask. I think it’s an adjustment we all have to get used to and honestly, I feel like the second day I was pretty used to it but we’ll see what it’s like to play a 90-minute game with the mask on.”

Sophomore midfielder Hailey Block said the idea of wearing a mask throughout a 90-minute match is a daunting task.

“At first, it definitely sounds scary just because we’ve been used to our lives playing without masks but we’ve been constantly wearing them around campus and during training and we’re getting used to them because we know that if we have to wear masks to play, we will do it as long as we get the chance to play on the field,” Block said.

Pelaez preached the idea that they will do whatever possible to have a season and take it one day at a time.

“I’m trying to tell them that every day is a great day and we got to take it to its fullest,” Pelaez said. “People are suffering, jobs are being lost, lives are being taken and with the political unrest and all of this other (stuff), if we have the opportunity to play a game and have the heart of a little girl but play like a woman and take that opportunity then go with it because it’s once in a lifetime.”

This story was written by Bryan Geenen. He can be reached at Bryan.geenen@marquette.edu or on Twitter @bryangeenen.