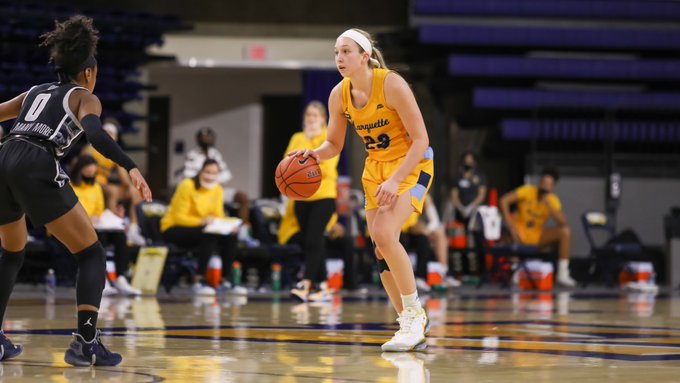 The Marquette Golden Eagles (8-2, 5-1 BIG EAST) are coming off an impressive 72-40 home victory against the Georgetown Hoyas Wednesday due to a career-high 21-point contribution from junior forward Chloe Marotta and a well-balanced scoring attack from the rest of the team.

Coming off of one of her best performances in a Marquette uniform against St. John’s, Marotta posted 11 points, 14 rebounds and seven assists, and she topped those numbers against Georgetown with 21 points, seven rebounds, and four assists to lead the Golden Eagles.

Marquette took control through the whole game, with a 23-point lead at halftime over Georgetown. This was only Georgetown’s fifth game of the season due to positive COVID-19 tests in the program resulting in postponements taking away many early season matchups.

After the game, Duffy praised her team’s effort on the defensive side of the ball after holding the Hoyas to only 40 points, which ties Marquette’s lowest opponent scoring this season, where Providence only managed to score 40 against the Golden Eagles in an 89-40 Marquette victory.

“I thought we did a great job defensively making shots they had to make very difficult,” said Duffy.

The Golden Eagles now travel to Indianapolis to take on the Butler Bulldogs (1-10, 1-9 BIG EAST) who are coming off an 80-66 loss to Depaul on Thursday and are currently on a three-game losing streak.

Turnovers were a common trend throughout the game for the Bulldogs, as DePaul forced 26 Butler turnovers on Thursday that resulted in 31 points for the Blue Demons.

Marquette will look to force many turnovers Sunday afternoon and get out into transition as Butler averages roughly 19 turnovers a game. The Golden Eagles will also look to take care of the ball themselves as they average 17.6 turnovers per game so far this season.

Selena Lott is 20 points away from hitting the 1,000-point mark for her career in a Marquette uniform.
Marquette has now won the rebounding battle in 39 out of 42 games in the Megan Duffy era.
The Golden Eagles are now 11-0 at home in the BIG EAST under Duffy.

MU has won 10 of the last 12 games in the series and leads 14-9 all-time.
Last year the two teams split games as the home team won both matchups.

Selena Lott leads the team in scoring (17.4), ranks second in assists (4.1) while ranking fourth in rebounding (5.3). With 980 career points, Lott is just 20 points away from becoming the 30th Golden Eagle to reach the 1,000-point mark.
Chloe Marotta is coming off her best week of the season with 11 points, 14 rebounds, and seven assists against St. John’s, followed up by a career-high 21 points, seven rebounds, and four assists against Georgetown. The Mequon, Wisconsin native is averaging career-highs in points, rebounds and assists so far this season.
Okako Adika is an Odessa junior college transfer who was a 2019-20 NJCAA Division 1 First Team All-American last season. Adika leads Butler in scoring, field goal percentage, 3-pointers made, offensive rebounds and minutes played, and is the only Bulldog to start in every game this season.
Genesis Parker is the second-leading scorer for Butler with 14.4 points per game, and she’s combined with Adika to score 43% of the Bulldog’s points on the year.

The BIG EAST matchup will be nationally televised on FS1, and tipoff is set for 1 p.m. CT at Hinkle Fieldhouse.