PREVIEW: Women’s soccer looks to take advantage of opportunity to compete during 2021 season 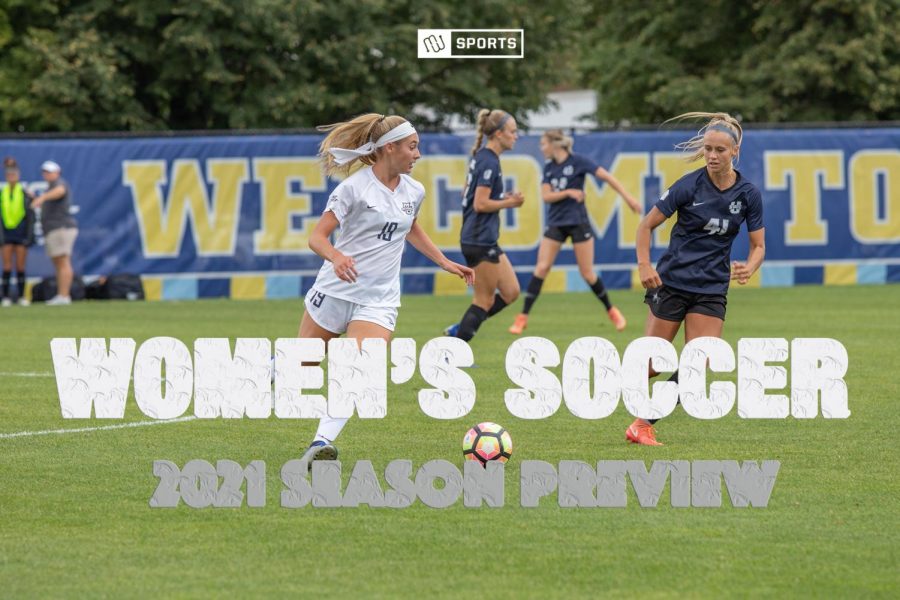 It is a new era in the Marquette women’s soccer program for the first time in nearly two and a half decades.

After ending 2019 with back-to-back losing seasons, the program’s longest-tenured head coach, Markus Roeders, stepped down after 24 seasons. The team is also without the program’s all-time saves leader Maddy Henry for the first time in four years.

However, senior defender Maddie Monticello said that last season remained on the back of her mind in preparation for this season.

“Last year was obviously one of the lows of my four years here when it comes to our record and losing season,” Monticello said. “It kind of lights more fire under me to do better because we have so much more to prove.”

Instead, Monticello said the Golden Eagles are using the feeling of being seen as an underdog as extra motivation to turn the season around.

Now there’s a new leader at the helm: Frank Pelaez. He previously spent 19 years as an assistant coach at MU from 1996-2014.

Unlike in past seasons, both Pelaez and Monticello said the theme and message for this season is taking things one day at a time. With the pandemic forcing the BIG EAST to cancel the fall season and the NCAA to move fall sports to the spring, these words have a whole new meaning.

“The message is, appreciate what you got because it can go away,” Pelaez said. “It’s a great message to teach in life because I’ve always lived that way where I am trying to absorb everything I can every day and don’t take any days for granted (but) it’s easier said than done.”

As the Golden Eagles returned to practice Jan. 18 following the two-month winter break, Monticello said Pelaez has done a great job honing that very same message he preaches to his players.

“Frank has done an awesome job leading our team to really making the most of every minute during practice with every single exercise we do,” Monticello said.

Monticello went on further to say she believes that the mentality that comes out of the way Pelaez runs his practices — fast-paced, crisp and constantly moving — will translate onto the field for both games and the way the season will go this year.

The Chicago native mentioned she is thankful for the opportunity to play her senior season.

“There have been so many ups and downs with COVID, some people getting to have their season and some people not,” Monticello said. “With that being said, it’s so exciting for me because it has been a long year for everyone. To think my college career could end with not getting a season was really scary, so I’m so excited.”

Marquette’s slate of BIG EAST opponents will look different this year, as the conference split up its 11 teams into two regional divisions to help reduce the amount of travel required. The Golden Eagles will compete in the Midwest Division and play twice against Butler, Creighton, DePaul and Xavier.

“It’s going to be different,” Pelaez said. “Any message you want to get across right now is that we just want to play the safest way possible. Anytime you play a team twice in a matter of time period, you get to absorb things a little more, you have time to discover a little bit more and look at your own team and look at their team, knowing that the next time you play could be a little bit different. I think it’s going to be fun.”

The most experience comes from the offensive front, where three veteran players headline the front line: senior Kylie Sprecher and juniors Alyssa Bombacino and Macey Shock.

Sophomore Shelby Fountain and senior Elaina Eckert are two other members on the offense that are expected to fight for time off the bench due to losing Abby Hess for this season.

Junior Katrina Wetherell returns to the midfield after starting 17 of 18 matches last season while posting two goals and two assists for six points.

Sophomore Alex Campana also returns to the unit. Campana told the Marquette Wire in August she spent the summer working on changing her pace from receiving the ball to attacking and taking on players.

Redshirt first-year Maddie Tabor mentioned she has embraced the new coaching staff’s clean slate mentality in her preparation for this season as she competes to find a spot in the rotation.

“For me, as a midfielder, fitness is the big thing,” Tabor said. “Being able to run up the field and then also be able to get back on defense. One way that I’ve tried to stand out is just to kind of having good fitness and being able to always be that person that’s never giving up and going hard on everything.”

“I am hoping that as an underclassman, I can still have a big kind of leadership role in this team, directing in the middle and being a huge defensive and offensive threat as well,” Block said.

The Golden Eagles also have senior Maggie Lena, redshirt juniors Meredith McGuire and Rachel Johnson and redshirt sophomore Sammi Bugay returning among the midfielders who will look to get time.

Despite losing star senior defenders Emily Hess and Bri Jaeger and Henry in the net, Marquette will have four experienced returners to the defensive third of the field: Monticello, junior Madison Burrier and sophomores Josie Kelderman and Addie Shock.

Burrier and Kelderman both provide the Golden Eagles with the ability to use them on the backline and midfield, as they split time between both units last season.

“They’re both good soccer players and good ambassadors of what we’re trying to do,” Pelaez said. “But I want the whole team to be that way so I’m looking at all of them to be adaptable because that’s what we have to deal with every day.”

When asked how surreal it might feel getting closer to coaching his first game as a head coach at Valley Fields, Pelaez said he hasn’t gotten there just yet.

“I just am enjoying everything I can with the girls that I have on this team and knowing that any point, anything can change,” Pelaez said.