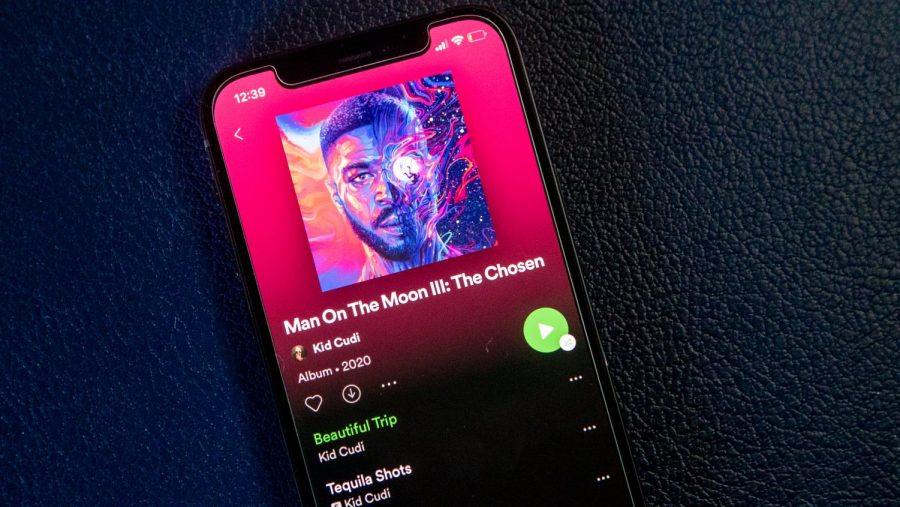 "Man on The Moon III: The Chosen" was the final part of Kid Cudi's trilogy.

Though 2020 was a big year for music, December may have been the biggest month of it all. From Taylor Swift dropping her second album of the year with “evermore” to Playboi Carti finally releasing his long-anticipated “Whole Lotta Red,” December was jam-packed with tons of big-name releases, so it only figures to talk about some of the most significant it had to offer.

Taylor Swift dropped “evermore” only a few short months after her previous album “folklore,” creating a lot of hype for the sister album. And for the most part, it seems as though she fully delivered.

With “evermore” scoring yet another number one album on the Billboard Hot 200, Taylor Swift seems to be continuing on the route of completely reinventing herself, one that began with “folklore.” “evermore” is an album that returns Taylor Swift to her country roots while also incorporating a lot of folk-rock influence. Many of the songs, such as “‘tis the damn season“ and “champagne problems” bank on Swift singing vignettes that bring nostalgia for an easier time in life, and Swift really sells the passion in each song. Her voice manages to convey a multitude of emotions and makes the sound very personal, even when she is not singing about herself.

One of the biggest problems Taylor Swift’s music has is how wrapped up in her own ego Swift can get by only speaking of her problems under the guise of being a celebrity that has already conquered the world. But on “evermore,” the stripped down acoustics and piano shed every layer of ego to create something that is truly touching, a refreshing change of pace from the bombast presented  on “Lover,” the album that was released prior to “folklore.” Though it is yet to be seen whether her days of explosive arena pop are truly behind her, it is great to see where Swift is right now.

“Whole Lotta Red” by Playboi Carti was possibly the most highly anticipated rap album of 2020. Since its announcement over two years ago, fans have been clamoring for “Whole Lotta Red” to release. Christmas 2020, Carti finally provided the complete album with 24 tracks, which earned him his first number one album.

On first impression, “Whole Lotta Red” sounds like a mess, with frenetic production and nonexistent lyricism from Carti as well as a crushingly long record length, which may be why initial fan reactions to the album were polarized. However, upon several listens, it becomes clear that this is exactly what Carti intended. “Whole Lotta Red” is an album of anarchy, and its songs bring to mind visions of Mad Max-esque imagery of skinheads driving metal monster trucks belching flames, brought to life by Playboi Carti himself. On the album, Carti fancies himself as a higher being than all. However, Carti does not go so far as to say he is Jesus, but acts more as a radicalistic leader for chaos.

The album’s production is a symphony of havoc, and Carti is its conductor. However, there is a method to Carti’s madness. On songs like “Stop Breathing,” where Carti uses his ragged and wild voice to amplify his fractured and disorganized delivery, and on “Vamp Anthem,” Carti samples Johann Bach’s famous piece “Tocatta and Fugue in D Minor” to create a very strange but incredibly enjoyable track.

What may seem like ramshackled beats with inane delivery is, upon deeper inspection, actually a carefully cultivated project that builds on each song to create a real experience. If there were to be a criticism of the project, it would be that its tiresome length and sheer amount of songs can be exhausting, and there were definitely a few tracks that could have been cut.  Songs like “Slay3r” and “Punk Monk,” which, while good, don’t add much to the overall project, and instead serve to pad an already lengthy track listing. Overall though, “Whole Lotta Red” is a pandemonious experience that, by the end, leaves you feeling breathless but still wanting more from Carti.

“Wonder,” Shawn Mendes’ fourth studio album, was released Dec. 4, and is dedicated to Camila Cabello, which is incidentally the prevailing problem with the album. On almost every song, Mendes repeatedly sings lavish praises upon some unnamed girl, to the point where the girl seems almost godlike, which is both somewhat terrifying and deeply annoying.

If you don’t care about celebrity relationships or even other people’s relationships in general, “Wonder” will be an exceptionally unpleasant listen, because it is quite literally the only thing Mendes sings about. And given that the project is 40 minutes long, the subject matter wears thin by the third track.

Mendes’ performance is also pretty poor on this album, due to his watery singing voice that ends up being swallowed up on songs that are way overproduced to the point where they are needlessly pummeling you with instrumentation. The length of the album is also something to note, because while not exceptionally long, it’s an arduous listen. With the continual worshiping of Camila Cabello, the album just feels longer and longer. “Wonder” was supposed to be a grand romantic gesture on the part of Mendes, but one could probably find more substance in a Hallmark Valentine’s Day card.

“Man on the Moon III: The Chosen” – Kid Cudi

Out of the artists who had a big 2020, one who flew under the radar was definitely Kid Cudi. Cudi collaborated with Travis Scott and Eminem, as well as released a solo single, yet it failed to make a real impact on the music scene of 2020.

From the anguish at his own mental chaos on “Solo Dolo, pt. III” to the soaring embracing of his own issues on “The Void,” “Man on the Moon III” allows you to experience Cudi’s pain while also being able to relate it to your own. Cudi floats over every beat and gives the album a very unique energy as he ventures into new avenues of music, such as the trap-style flow of “She Knows This,” to bringing Pop Smoke and British rapper Skepta for the drill track “Show Out.” “Man on the Moon III,” more than anything, is a journey that you take with Cudi as you explore the fraught complexities of Cudi’s mental state while also being able to gain a deeper appreciation for the mind in general, as Cudi really dives into his frenzied emotional state. “Man on the Moon III” was the perfect conclusion to the “Man on the Moon” saga, and promises that Cudi has no intention of going away anytime soon.

“That’s What They Say” – Jack Harlow

In a year where TikTok reigned supreme over the musical consciousness, with no one listening to radio while cooped up inside their own homes, Jack Harlow was one of the artists who thrived the most. When his song “What’s Poppin” went viral on TikTok, Harlow quickly capitalized by releasing “That’s What They All Say,” his debut album Dec. 11. Though the merits of his blowup may be debated, his quality as a musician is a different story.

On “That’s What They Say,” Harlow tries for some lyrical depth, and actually has some pretty solid beats on his tracks, but his failure is that he sounds the exact same on every single song in terms of tone and inflection. Unfortunately, that tone is pretty boring and quite lifeless. Harlow also banks on “What’s Poppin” to carry the album, as he includes not only the original version, but the remix with Tory Lanez, DaBaby and Lil Wayne, even though both songs had been around for several months at the point of release. Overall, Harlow simply plays it too safe and seems artistically stagnate on most of the tracks. On the project where he should’ve been hungriest to prove himself, Harlow unfortunately sounds content with what he’s accomplished and rest on his laurels, which doesn’t make for great listening.