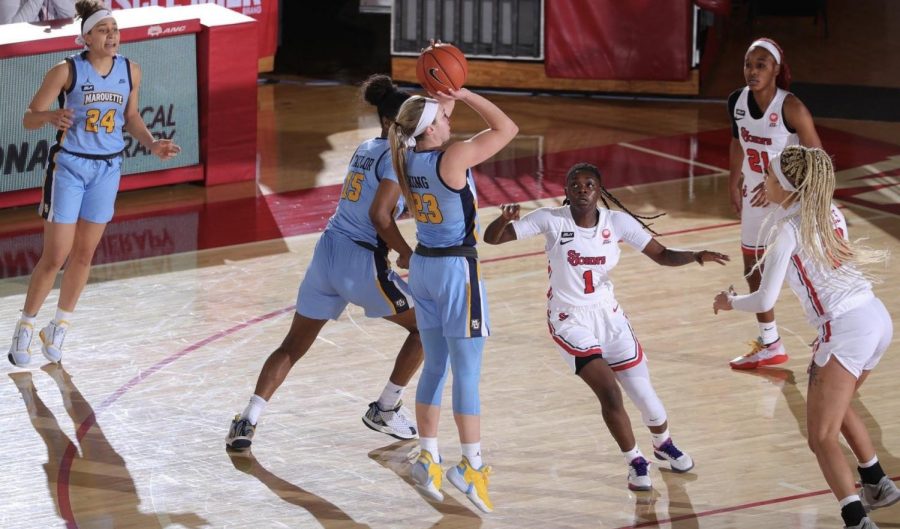 The Marquette women’s basketball team wrapped up a season sweep against the St. John’s Red Storm Sunday afternoon with a 72-61 victory.

The Golden Eagles had a two-game weekend, first playing Seton Hall Friday, where they came up short. This was their first game of the new year after being unable to play for nearly a month due to Christmas break and COVID-19 protocol.  MU bounced back from that loss Sunday and ultimately dominated inside the paint against St. John’s.

Senior guard Selena Lott had a season-high of 30 points on 11-14 shooting for the Golden Eagles to compliment five rebounds and two steals on the afternoon. She has put up 30 points or more in her career only twice in which both came against the Red Storm.

Junior forward Chloe Marotta also contributed in multiple ways on the court as she put up an impressive stat line of 11 points, 14 rebounds, and seven assists — all of which are season-highs.

Redshirt senior forward Lauren Van Kleunen had four points and seven rebounds, this broke her double-digit scoring in every game this season.

Senior guard Qadashah Hoppie did not play in the first meeting between the two teams Dec. 16, but St. John’s second leading scorer, who averages 18 points a game, was back in action Sunday afternoon and led the Johnnies in scoring with 15 points on 6-for-14 shooting.

It was a back-and-forth contest through most of the game with no team leading by more than nine points until the fourth quarter when the Golden Eagles went on a 18-6 run that sealed the game.

Marquette’s dominance in the paint was the difference in the competition, the Golden Eagles outscored the Red Storm 46-16.

Despite turning the ball over 17 times, St. John had a number of their own where the Golden Eagles were able to score 21 points off of.

Marquette’s record improves to 7-2 overall and 4-1 in the BIG EAST after nearly having a month off due to positive COVID-19 tests within the program.

The Golden Eagles finish their weekend east coast road trip 1-1 and will now return to Milwaukee to host Georgetown Wednesday afternoon at 2 p.m. at the Al McGuire Center.