Veteran leadership down the stretch allows Marquette to hang on against St. John’s 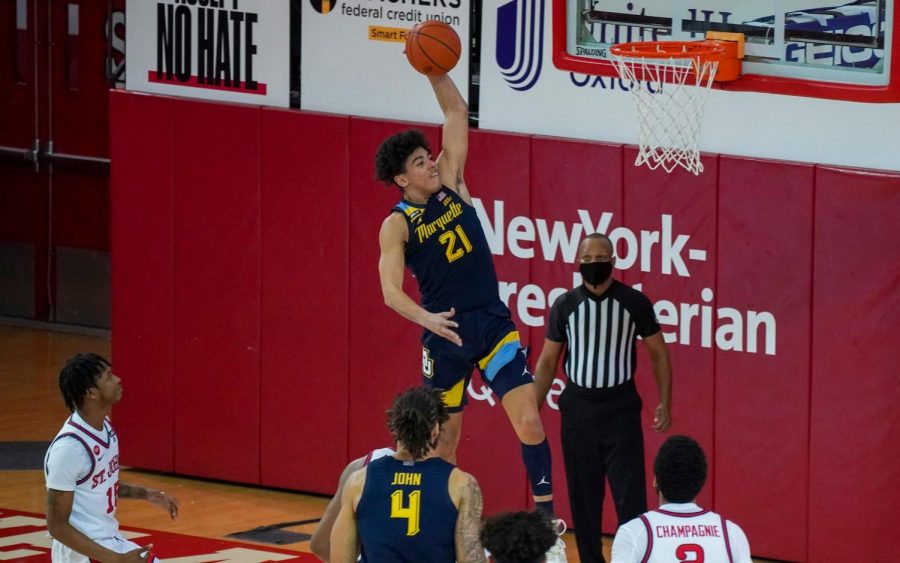 Sophomore guard D.J. Carton (21) dunks the ball against St. John's on Jan. 16. Carton had 14 points, nine of which came in the second half (Photo courtesy of Marquette Athletics.)

The Marquette Golden Eagles beat the St. John’s Red Storm 73-71 Saturday afternoon in a hard-fought, contested matchup on the road.

It was the late game heroics of redshirt senior guard Koby McEwen and senior forward Theo John that allowed Marquette to hang on to win back-to-back games. McEwen had the go-ahead layup with 27 seconds remaining to break the 71-71 tie, and he also prevented sophomore guard/forward Julian Champagnie from hitting a game-winning three at the buzzer. Prior to the shot, John had blocked junior guard/forward Vince Cole with one second left.

Despite a 2-for-9 shooting performance from the field to start the game, strong play on the defensive side of the ball allowed the Golden Eagles to stick around with St. John’s. The Red Storm shot just 31% in the first half and Champagnie, who entered as the leading scorer in the BIG EAST, had just two points and went 1-for-7 from the field.

“When we can score off our defense and not have to run against their pressure offense, that’s the best thing,” head coach Steve Wojciechowski said. “We were able to get some runouts as a result of our activity on the defensive end … (and) they’re huge plays in a one possession game.”

After the lackluster first half, Champagnie came out of the break and scored 15 consecutive points to give SJU a 53-51 lead. He went on 12-0 run by himself and finished with a team-high 20 points.

Junior guard Greg Williams Jr. was the only player to score in double figures for SJU. The Lafayette, Louisiana native had 15 points, two assists, one rebound and went 2-for-4 from 3-point range.

The only player to score in the midst of Champagnie’s 15-point scoring barrage was sophomore guard D.J. Carton, who got to the rim and threw home two dunks. Carton has often saved his best play for the second half this season, and this afternoon was no different. The Ohio State transfer finished with 14 points, nine of which came in the final 2o minutes of action. He also had five rebounds and three steals.

“In the second half, I can usually turn it up,” Carton said. “Usually, I just step up in the second half just because I’m able to read things more and things start to open up.”

The Golden Eagles dominated in the paint, outscoring St. John’s 38-26. They also led for over 26 minutes of play and shot better from the field and the free throw line.

Even without fans, the Red Storm have played well at home this season. They entered Saturday with a 6-1 record at Carnesecca Arena and the Golden Eagles had not won there since 2016.

“They play a very unusual style in today’s college basketball with their constant pressing, the pressure they apply to the ball,” Wojciechowski said. “They don’t really allow you to run plays, and so you have to make plays.”

Marquette now sits at 8-6 on the season, while St. John’s falls to 8-7. MU’s next game was scheduled to be played Wednesday against Georgetown, but was postponed due to COVID-19 issues within the Hoyas’ program. Therefore, the Golden Eagles are not scheduled to play until Jan. 23 when they take on DePaul at Fiserv Forum. The game will be telecasted on FS1.